The current news cycle has been chaotic and frantic, bad news seems to be unrelenting, and many of us need a break. 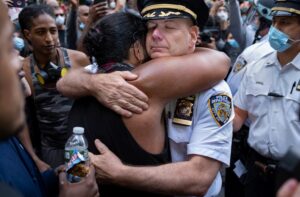 Debates and discussions about key issues will continue, and they’re often politicized, of course. But these conversations need to take place while many of us seek facts and truth as we try to weed through the messages put out by an agenda-driven media.

As the left works to divide Americans and push us to the point of ‘crisis fatigue,’ let’s remember to treat others with love, be patient, and when necessary, respectfully agree to disagree. Then move on. Be informed and pray, but it’s not worth the toll this is taking on too many good people.

First, how can we address race, division, and rioting in the most balanced, compassionate, and sensible way? What changes need to be made to improve law enforcement? And how do we sift through the lies and talking points to get accurate information so people can look at this with clarity?

Last week, we pointed out the fact peaceful protesters rightly concerned about the police handling of George Floyd’s arrest and homicide have now been hijacked by Antifa, Black Lives Matter, and many other radical groups. Their agendas range from general chaos and disorder to communism, anti-capitalism, and the take down our entire system of government.

And did you hear about this? After more than $55 million dollars of damage in Minneapolis St. Paul alone and hundreds of buildings damaged or destroyed, Minnesota Governor Tim Walz and other Democrat leaders want federal assistance. Um, no.

Then there’s the ironic and senseless vandalism to a monument of the 54th Massachusetts Regiment, an all-black squad of Union Civil War soldiers that bravely attacked Confederate forces at Fort Wagner. The Shaw Memorial honors the first all-volunteer black regiment who bravely fought for their nation, including Sgt. William Harvey Carney who carried the American flag through the entire battle and was the first black American to win the Congressional Medal of Honor for action.

The Memorial was defaced by rioters apparently demanding “justice” for African-Americans.

In an interview about his brand new book, The United States of Socialism, Dinesh D’Souza explained Antifa and these leftist groups need a show of force and intimidation, using a paramilitary because their socialist ideas cannot win on their own merits. He said they now combine Marxism with “racial” or “gender” grievance:

This brings us to the problematic push to defund the police. The Nancy Pelosi-led Democrats unveiled a bill Monday proposing a sweeping overhaul in what critics say is a far-reaching legislative response to the protests. After decades of inaction, the Democrat leaders only offer knee-jerk reactions.

Celebrities including John Legend, Natalie Portman, Megan Rapinoe, and of course, Jane Fonda have signed a letter calling to defund the police. Actor and now a police officer, Dean Cain says that’s the wrong answer and will lead to more anarchy and to vigilantism. He called out the hypocrisy of celebrities who want to defund the police but hire former officers in their personal security details.

If there’s this much civil unrest and violence now, imagine less security and law enforcement. In the last two weeks there have been at least TEN black lives lost so far. Where’s the outrage? And if you really care about all black lives, defund Planned Parenthood and the murder of black babies.

The hypocrisy of the complicit media, Hollywood elites, and Democrat leaders is again being exposed. But that won’t stop them. Los Angeles Mayor, Eric Garcetti wants to take $150 million from public safety, Portland $7 million, and who knows what those in Minneapolis St. Paul will do.

This past weekend, 21 people were shot and six died in Democrat-controlled St. Louis. And last week, Chicago recorded the single most violent day in its history according to the University of Chicago Crime Lab. There were 18 killed as police resources were already thin because of protests, riots, and looting. One report said 250 people were shot in this time.

Chicago mayor Lori Lightfoot and Alderman Raymond Lopez squared off on a profanity-laced phone call Sunday which was leaked to the media, arguing over the weak response to rioting and looting in Chicago.

Liberal Reverend, Michael Pfleger, a longtime crusader against gun violence said it was “open season” last weekend in his neighborhood and others on the South and West sides.

“On Saturday and particularly Sunday, I heard people saying all over, ‘Hey, there’s no police anywhere, police ain’t doing nothing,’” “I sat and watched a store looted for over an hour,” he added. “No police came. I got in my car and drove around to some other places getting looted [and] didn’t see police anywhere.”

And BLM wants to defund and take control of cities. What could go wrong?

Finally most of us have seen recent videos of individuals kneeling, bowing or laying face down in humiliation as they apparently submit to new authorities, apologize for white privilege, centuries of injustice, and for the sins of others. If you think I’m making this up just look up a few of these videos but I warn you in advance of second-hand embarrassment.

Forced submission, guilt projecting, shaming, virtue signaling. But most people get it and are respectfully refusing to go along with the charade being promoted by the left. Georgia State Trooper, O’Neal Saddler was asked to kneel at a Black Lives Matter Protest. He simply said he only bows to God.

One more quote from a friend in Christ, abortion survivor, Gianna Jessen:

but i will not bow and kneel in humiliation for injustice i am not guilty of. i will not apologize for the color of my skin. i will not be ashamed of the founding of this country.

i will kneel before only One. i will bow before Jesus Christ. along with my brothers and sisters of all tribes, color and nations. we will magnify His Name together.

i will not kneel to agree with manipulation and control. i will not bow before the accuser of the brethren.

i will stand, in Triumph, before the Lord of Hosts, who alone, weighs justly the Hearts of men.

She’s spot on! The truth is that one day, every knee will bow and every tongue will confess that Jesus Christ is Lord (Philippians 2:10-11).

We will all stand before the judgment seat of Christ and give an answer for what we did while on earth. The foundation of His throne is righteousness, justice, and truth (Psalm 89:14). A good God would be just and punish evil. He will not let sin go unpunished.

Those rightfully demanding justice will be begging for mercy one day if they do not confess their sins to the only living God and change their ways. The good news is by His sacrifice on the cross over two thousand years ago, Jesus satisfied divine justice for your sins and mine. Those who believe and call on His name will be saved.

We were created in the image of a holy God, and as for the truth about the human race, Luke records the Apostle Paul saying:

The God who made the world and all things in it, since He is Lord of heaven and earth, does not dwell in temples made with hands; 25 nor is He served by human hands, as though He needed anything, since He Himself gives to all people life and breath and all things; 26 and He made from one man every nation of mankind to live on all the face of the earth, having determined their appointed times and the boundaries of their habitation, 27 that they would seek God, if perhaps they might grope for Him and find Him, though He is not far from each one of us; (emphasis mine)

Jesus said in this world we will have trouble (John 16:33), but He has overcome. And though the world offers many counterfeits, true peace is found only in Him. Let not your heart be troubled, fear not, and believe!