Here are some quick facts about three stories involving new ways to push demonic agendas, one celebration of a cancelation, and one happy ending for a young couple who decided at the last minute to keep their baby. How it happened is very relevant to a story I reported on a few weeks ago. Here’s the rundown:

First, Planned Parenthood is using your tax dollars to bring abortion services to the people by deploying a fleet of RV’s. Next, in a story exposing apostasy, even Antifa is supporting so-called churches that host drag queen events for kids, a New York judge gives a green light to polygamy in a recent ruling, and Disney cancels the release of a new offensive FX show about a woman impregnated by Satan and about her Antichrist daughter.

We start with the nation’s largest abortion business handing out abortion pills and providing surgical abortions inside a fleet of murder mobiles (my words). Planned Parenthood announced last week they’re hitting the road soon in 37-foot RVs in order to bring life-ending abortion services to the border of states that have banned the procedure. New ways to commit evil deeds.

The goal of is convenience, of course, as the mobile (death on wheels) abortion clinics would reduce travel times and distances for victims, I mean, patients at state lines. One example is the Illinois border, which has apparently become a kind of haven for those who live in Missouri, Kentucky, and Tennessee and want to abort their children.

Next, one progressive judge says the definition of ‘family’ has morphed since 1989, and so has what is  considered “normal.” New York Civil Court Judge Karen May Bacdayan wrote that “the time has arrived” for polyamorous relationships to have legal rights,” and said the problem with previous same-sex rulings is “they recognize only two-person relationships.”

Writing at the Washington Stand, Tony Perkins of the Family Research Council warned:

“The media laughed off the conservative movement’s concerns about the slippery slope when Democrats pushed to sexualize the military 20 years ago. Now, almost two decades later, with American parents in the fight of their lives over transgenderism and judges paving the way for ‘plural marriage,’ it, unfortunately, proves we were right;”

Nearly twenty years ago, the late Justice Antonin Scalia warned of a day when state laws “based on moral choices” against “bigamy, same-sex marriage, adult incest, prostitution … adultery, fornication, bestiality, and obscenity” would fall. He was quite prophetic. Today, it’s no surprise that 23% of Americans think polygamy is “morally acceptable.” 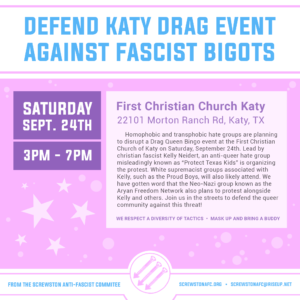 Next, we know we’re living in crazy times when professing churches deny teachings of the Bible and invite Satanists to be part of their drag shows. (read that sentence again, slowly!)  Remember, “church” has been redefined by liberals, radicals, and wolves within.

In Katy, Texas, a religious, social justice club masquerading as a church was defended by communist group, Antifa. Let me explain. They showed up to defend the LGBTQ-affirming church and a “family friendly” (more redefined language) drag bingo event, and also to counter-protest against the ‘hateful, homophobic, and transphobic’ Bible-believers outside the event.

The stated purpose of the drag event and bingo game was to raise money for the church’s “Transparency Closet,” which offers free clothes, underwear, shoes, and make-up to confused transgender children. I know, problems here on multiple levels.

Remember, Jesus is the same, God never changes, the Bible is true, Scripture is inerrant, not every church is a true church, and not every pastor is a real pastor.

Next, likely due to parental backlash and Christian organizations, depraved Disney cancelled the new release of an FX show called “Little Demon” featuring a plot depicting pagan rituals. The animated comedy was said to take place in Delaware, but no word on how close the Antichrist lived to Joe Biden’s house. 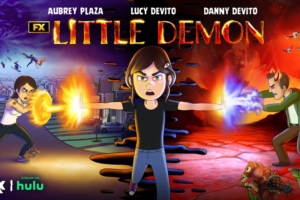 From the show description,

“…it has been 13 years since being impregnated by Satan, and a reluctant mother, Laura, and her Antichrist daughter, Chrissy, attempt to live an ordinary life in Delaware. However, the two are constantly thwarted by monstrous forces, including Satan, who yearns for custody of his daughter’s soul.”

Disney. Programming for children. Welcome to the year 2022.

Finally, a few weeks ago we reported on the fact Biden’s Justice Dept. has yet to arrest a single arsonist, vandal, or pro-abortion terrorist in the more than one hundred cases where pro-life pregnancy centers and churches were attacked, vandalized, or firebombed. But the FBI did raid the home of Mark Houck, a pro-life activist.

Now, a young black couple from Philadelphia said Houck was responsible for saving the life of their pre-born baby when their hands were literally on the front door of Planned Parenthood. The young mother said their conversation with Mark eventually led them to choose life for their baby girl, Nevaeh.

Targeted for intimidation by a Democrat administration, Houck is facing eleven years behind bars. The couple said they named their baby Nevaeh, which is Heaven spelled backward, because they believe the child was a gift from God. Little miracles and divine intervention.

This world is on a fast-track to Hell, but with astounding amounts of bad news these days, there are always plenty of stories with happy endings. We just need to look a little harder to find them. We also need to work a little harder to shine for the glory of God and maintain an eternal perspective while we stay engaged and informed.

AOC, DEMS, Elitist and Eugenic God-Complex
Every 24-Hours A Teacher is Arrested for Child Sex Crimes