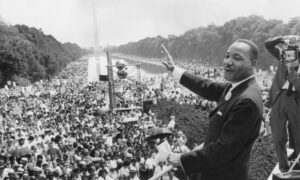 Last weekend as cities in America were burned and vandalized, the Lincoln Memorial was defaced with graffiti. The national monument honors Abraham Lincoln, who resided as president during the Civil War, a bloody battle fought over slavery and the treatment of black Americans.

It was at this same spot Martin Luther King, Jr. spoke to a massive peaceful assembly saying,

“We must forever conduct our struggle on the high plane of dignity and discipline,”

Today, the very steps he walked on are desecrated with black paint. At least two black officers have been shot and killed (UDATE: six black lives lost so far during rioting), multiple law enforcement shot, and countless injured in riots across the country. Violence and destruction was never part of the solution to racism.

This nation is experiencing a modern civil war – but it is a war between the spirit and the flesh. The Bible says our struggle is NOT against people!

The large-scale destruction of city blocks across a torn nation wasn’t caused by concerned citizens who were peacefully protesting the senseless and tragic death of George Floyd. Though I was disheartened and infuriated something like this happened yet again in one of our major cities, this mayhem has nothing to do with justice.

Like you, I was appalled by the mishandling of his arrest and now saddened for George Floyd’s family, who have recently spoken out against the anarchy, rioting, and looting. But the left and the radicals don’t seem to be listening. Theirs is a different agenda.

Make no mistake: America is under attack – from within!

Racism is not a skin problem, it’s a sin problem! It’s a heart issue and a symptom of a morally bankrupt society that needs God. If we would just believe, and treat each other with love and respect because, like it or not, we are one race, one blood; the human race. And the only way to be saved is through faith in the blood of Jesus Christ.

The Apostle John writes about Jesus and the universal offer of salvation, saying:

But as many as received Him, to them He gave the right to become children of God, even to those who believe in His name, (John 1:12)

The Bible says we are either of God – or of the devil; that people either practice righteousness or lawlessness. And you will know them by their fruit.

The anarchists, communists, and radicals are doing orchestrated damage to both private businesses and corporations as they overwhelm local governments, police, and cause a public safety crisis.

They are also succeeding at dividing us with the help of the usual culprits in the complicit media as they pour gas on the flames rather than work to put out the fires and promote peace. Siding with anarchists, do the Democrat media hate America so much that they would force change at any cost?

Damani Felder, founder of The Right Brothers, said the riots are clearly not about George Floyd. Check it out here:

One question being debated by Americans is this: is it logical or right to blame and condemn an entire police force or system of law enforcement when a vast majority do their jobs with integrity without a single blot on their records? Yes, there needs to be some reform, but to what extent?

Though I can’t imagine being black and the discrimination far too many citizens have endured, we need to keep it in perspective and stop believing America is inherently evil and our system of governance irreparable. We need to promote hope and healing, and this won’t come through human effort. Prayer is an absolute must.

We also need to recognize that God values every human life and we should love and respect others who are made in His image.

I find it interesting however, shortly after businesses began to reopen as a result of COVID 19 shut-downs – otherwise known as the Great Panic of 2020 – and days after many churches began gathering together in person again, organized chaos erupted. Hmmm.

Over 170 buildings and businesses were burned or destroyed in Minneapolis alone. Those sincerely seeking justice in the case of George Floyd have now sadly been drowned out by the agitators.

Police forces have been overwhelmed by ANTIFA and other anti-American groups. There are so many questions going back to the early stages of rioting. Why were there no arrests, why were they allowed to have free reign?

Why no rule of law and why didn’t governors issue orders to protect their citizens instead of stand down? These well-planned protests were organized in dozens of U.S. cities. This extensive agenda of chaos was manufactured weeks if not months ago, waiting for the perfect time to be implemented.

This goes beyond ANTIFA, rightly declared a terrorist organization, Black Lives Matter, and other groups. The left is following Saul Alinsky’s Rules for Radicals combined with the Cloward-Piven Strategy to ‘overwhelm the system’ of authority, free market capitalism, and representative government in America. 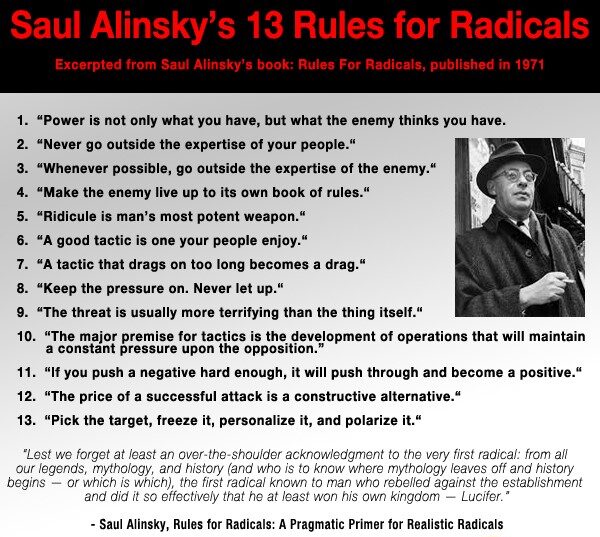 By the way, Alinsky dedicated his book to Satan. In fact, it was on the partisan, (National Education Association website) NEA recommended reading list for public school teachers for years!

These two influential, Marxist political philosophies (‘Rules’ and ‘Coward-Piven’) have helped shape the direction of our nation over the past fifty-plus years, bringing our nation to the precipice of economic and moral destruction.

Why don’t more honest people ask why the lack of media attention given to the constant murders in Chicago and other cities across the country? Since most of these deaths are African-Americans, they don’t fit the narrative and make the headlines. Why not?

Why not expose the truth about more black babies aborted than born in New York, home of the very first Planned Parenthood abortion clinic? Is it a coincidence approximately 78% of Planned Parenthood clinics are in minority communities? Abortion rates should cause us to wonder if the original vision and work of Margaret Sanger to reduce minorities is becoming a reality right before our eyes.

A friend from Chicago said a few days ago 82 people were shot and there were 20 deaths in that city alone. In all the cities, there were many white, young adults protesting, looting and assaulting police officers with projectiles. Some are paid agitators taking advantage of a crisis. This is manipulated mob mentality.

Racism exists. It is a horrific mark on world history. The Bible tells us the heart of mankind is wicked (Jer. 17:9).

That being said, with everyone I know personally, work with, and go to church with, not one person to my knowledge is racist. And though I didn’t grow up understanding what it feels like to be discriminated against because of my skin color, I do see the ongoing worldwide discrimination and slaughter of a people group regardless of color simply because they are Christians.

This severe persecution also goes unreported in the media.

I also personally know many police officers who I’m sure are angry, disappointed and embarrassed that one of their own would treat a fellow human being the way George Floyd was treated. I’ve read that he was a Christian and spoke out against violence.

The Bible says we are not to repay evil for evil; that we are to obey governing authorities, and to love our neighbor; to not let the sun go down on our anger. 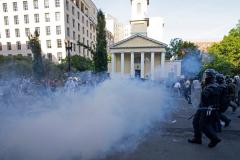 We can be outraged and upset about many injustices, work toward raising awareness and take steps to improve relations, but it is irresponsible to condone or justify the violent, terrorizing protests we’re seeing today.

Historic churches such as St. John’s Church in Washington D.C. either went up in flames or were vandalized on the very sidewalks every U.S. president has walked. In an effort to instill fear in more Americans, they challenged authority and the State last weekend just yards away from the White House fence.

According to reports, over 60 secret service agents were injured. Former secret service agent to President Obama, Dan Bongino, said what we’re witnessing is an Antifa led ‘sophisticated’ attack on cities and on The White House. He called it an organized ‘insurrection’ while saying this is not about George Floyd anymore; they’re trying to take down our government.’

Keeping it all in perspective, the Bible warns us that lawlessness would increase as the love of many grows cold. Though evil abounds and always will, we are not to conform to the world, but overcome evil with good. Sin is the problem, Jesus is the answer. Paul wrote this to the church in Galatia about those who believe and accepted God’s offer of forgiveness:

That is the only distinction we need draw. We recognize people as either saved or unsaved; spiritually alive or dead to sin. What side are you on?

The gospel is the power of God that leads to salvation, and true, lasting peace can only be found in Jesus Christ. Let’s remember that the Lord shows no favoritism (Acts 10:34) and we should follow His example.

Radical Take Down of America: Is the Left Winning? (extensive expose of Saul Alinsky and Cloward-Piven)

It is important we understand how we got to this point of corruption and crisis as a nation, determine who is responsible, and decide what we can do about it. Anti-Christian, anti-American agendas are being carried out across the country with little concern or resistance.

Accept the reality of the situation and trust God for the outcome. The Bible forewarns us about a globalist one-world government that hates God. Understand it is not a matter of if, but rather when this system overwhelms us. The Bible does not exclude America from the rule of Anti-Christ.

Who Was Margaret Sanger and Why Should We Care?

Targeting Black Babies for Abortion is Not Racist?