“When we said we will no longer sit in the back of the bus, a place was being reserved for us down at the abortion clinic.”

Has the conscience of our nation become so desensitized that there’s no outcry when a movement encouraging black women to abort their babies is practically ignored? Isn’t it racism to promote the selective extermination of the offspring of a people group? Wake up, America, your apathy is showing.

They sell abortion like just another form of birth control. But like slavery, just because something is legal does not make it moral. Through history in the pages of the Bible, pregnancy is seen as a blessing to be enjoyed, not a problem to be eliminated. But even though Jesus Christ is the same yesterday, today and forever (Hebrews 13:8), culture is always changing.

One hundred years ago, at a time when abortion was still seen as taking innocent life in a mother’s womb, Planned Parenthood founder, Margaret Sanger coined the term, “birth control.” The deception has now become public policy, and what was once spoken of in hushes and whispers is now openly and proudly promoted.

Even Oprah got behind the “Shout Your Abortion” movement as its founder, Ameilia Bonow, was recently featured in Winfrey’s O Magazine. 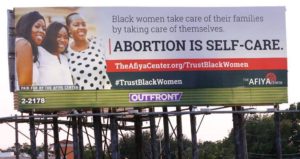 But a new billboard in Texas actually takes this darkness to a new level – and a new low! In large capital letters, the sign reads: “ABORTION IS SELF-CARE” which follows the astonishing statement:

“Black women take care of their families by taking care of themselves.”

But how can a black woman – or any woman – start a family unless a baby in the womb is allowed to be born? What lies! The left calls abortion “reproductive justice,” but they’re not at all concerned about justice for the innocent lives being wiped out.

And we just go on with our lives. Have our hearts become that hardened? Abortion is legalized brutality against a pre-born human being.

WOW. So for BLACK women, killing our offspring is like a day at the spa. They don’t market this way to any other group. @PlannedParenthood still operating on behalf of Margaret Sanger.

What Adolf Hitler did to millions of Jews through eugenics and sterilization, Planned Parenthood founder, Margaret Sanger has dwarfed by pioneering a movement leading to the abortion of over one hundred million babies in the United States. Just as disturbing, the horrendous Roe V Wade decision in 1973 seemed to justify the evil of Sanger’s worldview.

A native New Yorker, Margaret Sanger is still celebrated by feminists and liberals today including Hillary Clinton who once said she was in awe of Sanger. Is it just a coincidence approximately 78% of Planned Parenthood clinics are in minority communities?

Margaret Sanger’s publication, The Birth Control Review, was founded in 1917 and through the years, she often published articles from eugenicists such as Ernst Rudin. Rudin was a psychiatrist who worked as Adolf Hitler’s director of genetic sterilization and founded the Nazi Society for Racial Hygiene (Germany’s racial purity program).

Ernst Rudin’s article, “Eugenic Sterilization: An Urgent Need,” was also published in 1932 in Sanger’s Birth Control Review journal. The fol­lowing year, Rudin drafted the Nazi Sterilization Law in Germany. Rudin publicly praised Hitler for making his “more than thirty-year-old dream a reality” by imposing “racial hygiene.” It was only one year after Sanger delivered her infamous Peace Plan that Hitler signed the Law for the Prevention of Hereditarily Diseased Offspring.

It appears the original vision and eugenic work of Margaret Sanger has become a reality. Sanger even spoke to the women’s auxiliary of the Ku Klux Klan in New Jersey in 1926, and just three years later, her American Birth Control League laid the groundwork for Sanger’s first clinic in Harlem.

Sanger worked closely with William Edward Burghardt Du Bois, co-founder of the National Association for the Advancement of Col­ored People (NAACP). Prior to World War II, she was outspoken about her views on race, and used the influence of prominent blacks to promote abortion as “compassion.”

Du Bois helped Sanger with the “Negro Project,” for which Sanger invited black leaders includ­ing physicians, ministers and journalists, to form an advisory council to help direct the Harlem clinic and control births in the community.

“The mass of ignorant Negroes still breed carelessly and disas­trously, so that the increase among Negroes, even more than the increase among whites, is from that part of the population least intelligent and fit, and least able to rear their children properly.”

The warped propaganda campaigns worked. The billion dollar-business of abortion is not only a Sacrament to the Democrat Party, a new study reveals nearly 75% of women now feel unwanted pressure to kill their babies.

That public pressure did not suddenly appear overnight, but it’s now the reality young women face. Billboards promoting abortion are offensive and wrong. If we truly care, we must not be silent. We need to work and pray to change hearts and minds about the value of every human life – regardless of its location.

So many verses in Scripture support life in the womb, but I’ll leave you with Psalm 106:37-38, which may well be a description of America’s genocide:

The Anguish of Abortion: Part 2

One Nation Under Apathy: the Devaluing of Human Life