It was Margaret Sanger who laid the foundation for today’s liberal social agenda that has left a legacy of anguish, confusion, pain, and death during Planned Parenthood’s century in business. Their legacy of “birth control” is one of radical feminism, rebellion against God, racism, and eugenics that in recent years has expanded to include abortion on demand and sexual experimentation leading to brokenness, depression, regret, and worse.

What Adolf Hitler did to millions of Jews through eugenics and sterilization, Planned Parenthood founder, Margaret Sanger has dwarfed by pioneering a movement leading to the abortion of over one hundred million babies in the United States since the 1920s. Sadly, most people are ignorant of this horrible history leading to ideas such as population control and euthanasia. Proud promoter of eugenics and racism, Margaret Sanger is celebrated today by most feminists and liberals. So what’s the truth behind this dark history?

Ninety-four. Remember this number. A baby is aborted at a Planned Parenthood facility somewhere in America every 94 seconds. In that same amount of time, Planned Parenthood receives over $1,100 in federal funding. That equals more than twelve taxpayer dollars a second and allows them to abort over 912 lives every day. How did it get to the point in America where we kill our own and call it a choice? It didn’t happen overnight, but an abortion is committed – Every 94 seconds…

Less than two percent of abortions are due to rape or a mother’s life being threatened, so why do we rarely hear an honest discussion about reducing or eliminating the 98% of abortions performed because of convenience, selfishness, and other unbiblical reasons? Furthermore, why do we continue allowing government to force all working Americans to pay for all of abortions in America?

We need to look at how this ongoing evil has come to be accepted in a land that used to be considered a “Christian nation.” In order to do this, it’s important to expose Planned Parenthood founder Margaret Sanger’s legacy of death and destruction. We dug up some shocking history of this warped, wicked worldview. 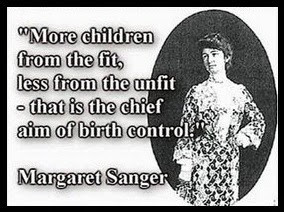 Hold on to your coffee while we connect some dots!

In her book The Pivot of Civilization, Margaret Sanger mentioned “constructive eugenics,” saying:

“…we are paying for and even submitting to the dictates of an ever increasing, unceasingly spawning class of human beings who never should have been born at all…”

Reports indicate the Nazi’s were inspired by the population control movement in America in the 1920s and 30s. Planned Parenthood founder Margaret Sanger promoted a eugenic ideology that eventually led to the gas chambers in Germany. A truth seeking, fair-minded person cannot read Sanger’s writings without seeing her ungodly influence.

Sanger’s publication, The Birth Control Review (1917-1928), was founded in 1917 and through the years, she often published articles from socialists and eugenicists such as Ernst Rudin. Rudin (1874-1952) was a psychiatrist who worked as Adolf Hitler’s director of genetic sterilization and founded the Nazi Society for Racial Hygiene, which was Germany’s racial purity program. 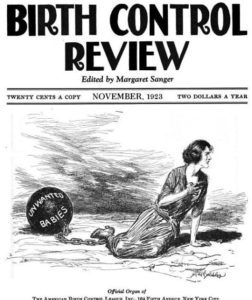 But most people fail to realize it was the United States that led the forced sterilization movement which began on the mentally ill and on prisoners. Between 1907 and 1939, more than 30,000 people in twenty-nine states were sterilized, many of them unknowingly or against their will, while they were incarcerated in American prisons or mental institutions. Nearly half the operations were carried out in California.

According to her own autobiography, Margaret Sanger spoke to the women’s auxiliary of the Ku Klux Klan in Silver Lake, New Jersey in 1926. Just three years later, Sanger’s “American Birth Control League” laid the groundwork for her first abortion clinics in Brooklyn and Harlem.

While she lived in New York City, she was involved with radical political movements like socialism, communism, anarchy and militant labor unions. Sanger even argued for compulsory sterilization and segregation for people with disabilities.

In 1932, Margaret Sanger published “A Plan for Peace” in the April issue of her Birth Control Review. Here is part of her agenda:

That same year, Ernst Rudin’s article, “Eugenic Sterilization: An Urgent Need,” was also published in Sanger’s Birth Control Review journal. Then in 1933, Rudin drafted the Nazi Sterilization Law in Germany which originally called for the sterilization of “schizophrenics,” “alcoholics,” and “manic-depressives” – the subjects of Rudin’s research. As these legal sterilizations began, programs were already underway to sterilize “black” Germans and expanded to include Jews, Gypsies and, in the words of Rudin, other “inferior race types.”

After World War II had concluded, the horrors of eugenics, concentration camps, human experimentation, and the gas chamber were exposed. Margaret Sanger acted quickly and deceptively to distance herself from the Third Reich’s “Final Solution.” Her idea to change the name of her Birth Control League (aka Birth Control Federation) was shrewd, and the organization became “Planned Parenthood Federation.”

Until 1942, birth control and eugenics were nearly impossible to separate. Prior to World War II, Sanger was outspoken about her views on race, and used the influence of prominent New York blacks to further her cause. Margaret Sanger reiterated the need for black ministers to head up the project in a letter to Clarence Gamble in Dec. 1939: 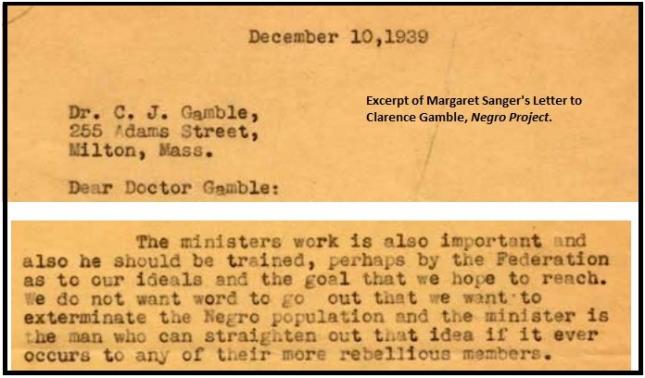 “We do not want word to go out that we want to exterminate the Negro population and the minister is the man who can straighten out that idea if it ever occurs to any of their more rebellious members.”

Is it a coincidence nearly 80% of Planned Parenthood clinics are in minority communities today?

Sanger worked closely with William Edward Burghardt Du Bois, co-founder of the NAACP on the “Negro Project,” and invited other prominent black leaders to be advisers and help limit births in the Harlem community.

For you created my inmost being; you knit me together in my mother’s womb. I praise you because I am fearfully and won­derfully made; your works are wonderful…. My frame was not hidden from you when I was made…. Your eyes saw my unformed body; all the days ordained for me were written in your book before one of them came to be.

And the first human being in the pages of Scripture to recognize the Lord Jesus Christ was John the Baptist – in his mother’s womb before he was born!

When Elizabeth heard Mary’s greeting, the baby leaped in her womb; and Elizabeth was filled with the Holy Spirit. Luke 1:41

Margaret Sanger taught that the campaign for abortion is “practically identical with the final aim of eugenics.” In 1934, she suggested that only parents approved by government or eugenics leaders be allowed to have children, and that a strict code be enforced to stop the overproduction of children.

Sanger reasoned that by requiring a license for mothers to give birth, it would protect society from those who are unfit. Part of her “American Baby Code” included: 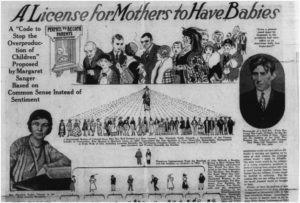 Article 5. Permits for parenthood shall be issued upon application, providing the parents are financially able to support the expected child, have the qualifications needed for proper rearing of the child, have no transmissible diseases;

Article 6. No permit for parenthood shall be valid for more than one birth.

One only needs to look to China for disastrous consequences of its enforcement of an awful, totalitarian one-child policy. But the rotten fruit of Margaret Sanger has already brought decades of destruction and the devaluing of human life.

According to LifeSiteNews, in 1960, Psychiatrist Dr. Jerome Kummer and Zad Leavey, Deputy District Attorney of Los Angeles, suggested at an annual meeting of the American Medical Association (AMA), that abortion laws be changed to allow for, as the New York Times reported, “medical, eugenic and humanitarian reasons.”

Then in 1962, Alan Guttmacher, M.D. began his years as president of Planned Parenthood. The following year (1963) Betty Friedan published her book, The Feminine Mystique. Then, in 1964, the platform of the American Eugenics Party was presented and read in part, “The United States is already over-populated. We must stop all immigration and impose birth controls.”

“There’s not a single fetal or maternal condition that requires third trimester abortion. Not one. Delivery, yes. Abortion, no.”

Liberals today such as Hillary Clinton, Katie Couric, Oprah, Hollywood actresses, and many others have praised Margaret Sanger’s work. Manhattan even honored the radical feminist icon with Margaret Sanger Square.

I even saw a photo of a plaque with a quote by Margaret Sanger, saying, “No woman can call herself free who does not own and control her body.”

“Or do you not know that your body is the temple of the Holy Spirit who is in you, whom you have from God, and you are not your own? 20 For you were bought at a price; therefore, glorify God in your body and in your spirit, which are God’s.”

This is not just a political issue! If abortion eliminates a human life, then abortion is a moral and spiritual issue!

Please pray for hearts to change, and it must start with true believers in Christ. Church leaders need to boldly speak up because this is a matter of life and death. We must also elect conservative, pro-life, and pro-family representatives to local and state legislatures.

Many men of God share this sentiment: Pastor John MacArthur said, “If you’re a Christian, you cannot vote for a person or party that slays babies in the womb.” Democrat Christian friends, are you receiving any of this?

Next to the gospel of repentance and salvation, this is the most important battle in our culture because every human being has the right to life, and those rights come from God, not man, and certainly not government.

Extensive: All You Need to Know about the History of Planned Parenthood

Stop the Multiplication of the Unfit

Margaret Sanger Spoke to the Ku Klux Klan: Why Does PP Still Support Her?

Targeting Black Babies for Murder is Not Racist? 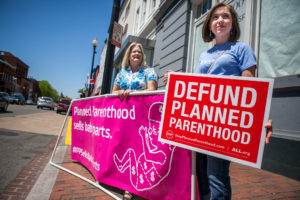