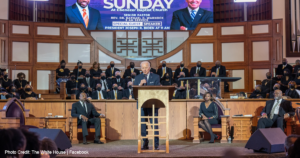 You can see why the Biden administration chose Warnock’s church, but too many people fail to discern what is biblical compared to what is unbiblical.

Joe Biden preached a gospel of works righteousness, of “civil religion, and of social progress towards an earthly paradise” according to reports. Students of Scripture would say he failed to handle the word of truth accurately and ripped Bible verses out of context.

It is both interesting and tragic that this same church, now led by a radical politician with Biden “preaching” to the leftist choir, was where Martin Luther King Jr. once served.

Warnock has praised Reverend Wright’s infamous “God Damn America” rant calling it “a very fine sermon,” in a 2014 speech. The sermon included a comparison of the U.S. to Al-Qaeda and was full of other anti-American rhetoric.

For decades, prominent Democrat elites have increased the use of ‘spiritual’ language, invoking God and duping people into thinking they have found religion. They call evil good and mock the God of creation in the process.

Part of Biden’s focus was morality according to the standard of the secular left. Like Nancy Pelosi and others who say God is on their side, the left claims to be righteous though they call evil good and misuse Scripture when they want to attract people of faith.

What a farce. I’m not so sure even they believe what they’re saying, but they’re deceiving many biblically illiterate Americans.

One thing Biden said was their job is “to redeem the soul of America,” even claiming that was the goal of Martin Luther King’s Southern Christian Leadership Conference.

Democrats pedaling religion for political profit often allude to the battle of good and evil (guess what side they claim Democrats are on?). Biden said the power to “redeem the soul of America” is in the hands of ‘We the People.’” Who’s “we”?

Translation: just keep voting for his political party claiming light, healing, unity, and justice, and the nation will be redeemed by leftist saviors and progressive public policy.

What else did the opportunistic president say? Referring to Matthew 22:39 on loving your neighbor as you love yourself, Biden stated:

But the biblical gospel is about being saved from Hell and punishment for sin, it’s about eternal life through faith in Jesus Christ alone. The good news is all about Jesus, His life, death, resurrection, ascension, and promised return.

In the Book of Acts (2:38), the Apostle Peter wrote that this gospel offers salvation in Jesus Christ “for the forgiveness of your sins.”

The two verses that Mr. Biden referred to are not the gospel, but are what Jesus called “the greatest commandments” of the law. (“On these two commandments depend all the Law and the Prophets” Matt 22:40).

Colossians 1:13-14 is one of many Scripture passages explaining how God is the one who redeems us through the sacrifice of Jesus Christ:

For He rescued us from the domain of darkness, and transferred us to the kingdom of His beloved Son, 14 in whom we have redemption, the forgiveness of sins.

The Apostle Paul emphasized the true gospel that the early church first received:

But what about this lofty idea that the soul of an entire nation can be redeemed?

“Jesus is our Redeemer because he shed his blood in place of ours. In the gospel according to Biden, America’s soul can be redeemed without blood; “We the People” can accomplish it on our own power, without divine aid.”

Here we have either a disconnect – or purposeful deception. It seems our culture now understands and defines the word, “soul” very differently today because the Humanists and Marxists on the left support “values” that are in opposition to Christianity and the inerrant Word of God.

Almost exactly one year ago, I wrote:

During the 2020 election cycle, Joe Biden’s website displayed an interesting phrase in the upper-left corner: “Battle for the Soul of the Nation.” Most people missed it. The implication was this: the soul of America is at stake, and those nasty, deplorable evangelical Christians, conservatives, and Republicans are the immoral ones who are hurting the country.

In Atlanta last week, Biden again said, “The battle for the soul of this nation is perennial,” and added that it is “a constant struggle between hope and fear, kindness and cruelty, justice and injustice.”

First, who do you think he is associating with fear, cruelty, and injustice? Certainly not anyone on his side.

Second, many words have been redefined by the political and religious left: soul, justice, church, love, morality, rights, socialism, tolerance, and even truth.

Just remember this spiritual, worldview war can be summed up in three words: God or man.

Practically anyone can use the label “pastor” or “reverend.” Any group or building can have the name “church.” And just about anything can be redefined to mean “Christian.” Don’t buy it!

But there is only one true living God and Jesus is the only way, truth, and life.

Be warned. If your church, your life, and words do not align with His teachings from the Bible, you might be deceived and need to repent. Are you trusting in and serving the biblical Jesus?

Abandoned have been the timeless historical truths that God created the heavens and the earth, mankind is made in His image, He established the two genders, and ordained marriage and family and civil government.

Biblical morality teaches absolute truth based on the fixed moral standards in God’s Word. Social justice apostasy teaches works and that man is god, and morality is subjective, ever-changing with the times (who can really know what’s true?). Anything then, can be justified if it advances the leftist socialist revolution.

Love confronts evil, rejoices in the truth, stands up for what is godly and right, and warns others of the judgment to come. Be on your guard and test all things! The biblical Jesus is the one and only living Savior, authority, and solution.

Gaslighting & the ‘Gas Stove’ Strategy: Start With Outrageous, Progress on the Ridiculous
It Just Takes A Generation – Abandoning Inerrancy to Post Modernism