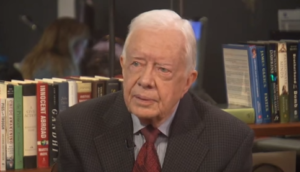 Welcome back Carter. Jimmy Carter, that is. He’s back in the news for a good reason this time as he and his wife, Rosalyn, have been married for 76 years. That’s a huge accomplishment for anyone, but some Christian outlets are taking it a step further and suggesting Carter is a kind of role model for Christian living.

It’s important to look at some of Carter’s philosophies, statements, and political ideology to better understand the contradictions between what he says and what the Bible teaches.

The Carters were married in 1946. I know, that’s quite an accomplishment and in fact, theirs is the longest presidential marriage recorded. Kudos for staying together in a culture that now disrespects the institution of marriage and downplays the vital role of family.

Sadly, Jimmy Carter’s presidency is considered by most to be a failure, and he left office with one of the worst presidential approval ratings in history. I bet he’s thankful to see a president today with even lower approval ratings as the country is suffering on nearly every front. Cost of living, gas prices, and inflation under Joe Biden’s presidency are sitting at a 40-year high.

So give Carter credit for a good marriage, yes, but don’t put him or his secular worldview up on a pedestal as some Christian outlets seem to be doing. That’s right, I said “secular worldview.” He seems to adhere to a philosophy of syncretism. Let’s look at the facts.

A professing southern Baptist, Jimmy Carter supports abortion on some levels and fully endorses so-called, “marriage equality.” He once revoked the status of Christian academies labeling them as “separatist,” and said on several occasions that animosity toward former President Obama is racism; people didn’t like him because he’s black.

Carter, who taught Sunday school on occasion, actually said he doesn’t “have any verse in Scripture” to back up his claim, but somehow declared, “I believe that Jesus would approve of gay marriage.” Carter went on to say in an interview that “I think Jesus would encourage any love affair if it was honest and sincere and was not damaging to anyone else, and I don’t see that gay marriage damages anyone else.”

Just be sincere. It doesn’t really matter if the Bible supports it, just be loving and define what you think is “damaging” to others including young children, and do what you want. Your will be done.

Please understand I’m not bringing this up out of the blue to bash a former president. Why mention this then? Because people who don’t know the Bible, the context of many Scripture passages, and worldview of Jimmy Carter will assume he represents all that Jesus taught. After all, the Bible says we are “ambassadors for Christ (2 Cor. 5:20).”

Several years ago when Carter made news claiming Jesus would approve of homosexuality, evangelist, Franklin Graham responded this way:

I have to respectfully disagree with former President Jimmy Carter on this one. He is absolutely wrong when he said Jesus would approve of gay marriage. Jesus didn’t come to promote sin, He came to save us from sin. The Bible is very clear. God destroyed the cities of Sodom and Gomorrah because of homosexuality. God defines sin in His Word—it’s not up to our opinion, the latest poll, or a popular vote. What is very troubling is that some people may read what President Carter has said and believe it;

That’s why this is important to address. Americans no longer understand what the Bible teaches as recent surveys prove their biblical worldview is nearly non-existent. Even pastors, church and youth leaders are also on the decline when it comes to worldview.

So we need to go over some basic points again and ask why, over the decades, has Jimmy Carter sided with far leftists such as Michael Moore, Sean Penn, and Noam Chomsky praising socialist regimes in Venezuela. Aside from useful idiot social justice minions, the wealthy power elites critical of capitalism have done quite well for themselves.

The Bible also teaches that nations who bless Israel will be blessed by God, and those who curse Israel will be cursed (Genesis 12:3). Jimmy Carter has often been criticized for anti-Israel statements or for lacking understanding of foreign policy. Some go so far as to say he is an anti-Semite.

He once naively suggested “peace will come to Israel and the Middle East only when the Israeli government is willing to comply with international law.” Just surrender. If Israel bows to the U.N. and those demanding compromise, they will no longer have a nation.

Next, back in 1998 the Southern Baptist Convention decreed women must submit to their husbands and could not be pastors. Both are biblical concepts though proper context always helps. The point is former president Carter rejected this decision.

Back to his misinterpretation of Scriptures regarding sexual immorality and the definition of marriage, Carter said in 2012 that homosexuality was well known in the ancient world. Does that make something right or holy today just because it existed in past history?

Carter also wrongly claimed “Jesus never said a word about it” and He would have felt it was “fine for gay people to be married in civil ceremonies.” Really. Let’s look at one passage in Mark’s gospel where Jesus affirmed creation, family, and defines marriage:

“But from the beginning of the creation, God ‘made them male and female.’ 7 ‘For this reason a man shall leave his father and mother and be joined to his wife, 8 and the two shall become one flesh’; so then they are no longer two, but one flesh. 9 Therefore what God has joined together, let not man separate.” Mk 10:6-9

Let’s look at just one more issue regarding Jimmy Carter’s worldview. There also seems to be some confusion not only biblically, but with the U.S. Constitution and his view of the second biggest lie in America: the (so-called) separation of church and state.

Like many on the left, Carter seemed to believe the culture and public square are no place for Christian influence. He often noted the Baptist Church was founded in part on that principle – staying out of politics and the public. According to sources, as president, he refused to have prayer breakfasts in the White House.

If he did trust in Jesus and believe the whole counsel of God in Scripture, he decided not to let his religious views shape public policy. But it’s impossible to divorce your faith from your actions. That’s called compartmentalizing your faith. Carter struggled at times during his presidency to reconcile his faith with his secularist philosophy.

There’s a big contradiction here. We cannot separate our biblical worldview from our politics or our actions. Faith without works is useless (James 2:20). Moreover, the Bible is not ambiguous when it comes to sexual immorality. If you are truly a born-again believer in Jesus Christ and are obeying His word, your life will clearly reflect your faith. And if you are a true disciple of Jesus, your faith and actions will align with Scripture.

It’s not that complicated.