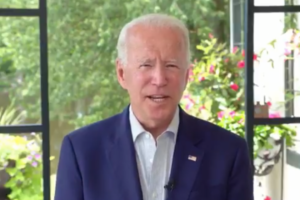 Islam is a great confessional faith? What does he mean by that? Joe wants more Islam in public schools. This is not surprising coming from a man who was the VP of the most pro-Muslim, anti-Christian administration in U.S. history, but what about the separation of mosque and state?

Let’s look at some of the contradictions, pandering, and some radical policies of Joe Biden 2.0.

So Joe proudly supports homosexuality and every aspect of LGBT culture, and yet, he wants more Muslims to vote for him. No one sees a contradiction here? Every place in the world that mandates the death penalty for homosexuality is a Muslim one. (media crickets) Biden endorses the whole ‘Pride” movement that celebrates a sin that Islam teaches is abhorrent to their god, Allah.

But let’s not get hung up on technicalities.

For those who may think Islam and Christianity are common “Abrahamic faiths,” Jesus clearly said He is the only way to the Father in heaven and to salvation. He taught us to love our neighbor and forgive others. He confirmed the Old Testament and defined natural marriage between one man and one woman.

The prophet Muhammad on the other hand, led armies in battle, beheaded those he considered infidels, and had at least a dozen wives – one of them named `Aisha, who was just nine years old.

Christianity teaches God is one, and exists is three separate Persons: the Father, the Son, and the Holy Spirit. But Islam teaches there is no god except Allah, and he had no son.

Jesus Christ taught humility and to serve others; the Apostle Paul said he was a bond slave of Christ. Islam teaches conquest and control, (Islam means “submission”) and according to one expert in Islamic history, Timothy Furnish;

The Islamic world enslaved millions, and its slave trade continued long after the Transatlantic one ended. Jihad, decapitation and child marriage are still practiced in Islam by legions who take the Qur’an, Muhammad’s life and his Hadiths (alleged sayings) literally.

Back to Joe Biden who wants more Islam to be taught in public schools. He recently hired an Islamic supremacist for his campaign, and has accepted endorsements from radical groups. One of them, Emgage, is a group backed by George Soros. They partnered with the Islamic Society of North America last summer, an entity of the Muslim Brotherhood which is an often violent arm of the Islamist agenda to force a worldwide caliphate and implement Sharia law.

It’s also not surprising that one of Biden’s main policies is open borders. Biden has promised to rescind Trump administration travel and refugee bans to the elation of far left Muslim socialists in Congress, Ilhan Omar and Rashida Tlaib. And by the way, in case you need more evidence Joe supports socialism, he has not only endorsed AOC’s radical “Green New Deal,” she will serve on Biden’s ‘climate panel.’

Next, as a U.S. Senator, Joe Biden repeatedly voted to support late-term abortions and wants you, the taxpayer, to fund them. Biden also promised to ‘codify Roe v. Wade’ into federal law giving states no say about lives of the preborn.

But remember one of his top priorities? Biden said that as president he will require federally funded schools to let biological males who identify as females use female bathrooms and locker rooms. To be clear, he officially Tweeted:

“Transgender equality is the civil rights issue of our time”

Civil rights issue? Joe Biden’s A.B.C. worldview (Anything But Christ) and his awful record with the Obama administration should be concerning to most freedom-loving, Americans. He has snubbed conservative, Christian, and religious citizens who believe in the one true God and His Son, Jesus Christ, the traditional family, and natural marriage.

For those who keep pointing to the character of President Trump, there are things he says and does that I cannot and will not defend. I also realize there are professing Christians who are very outspoken in their opposition to Trump, but I wonder how or if they’ll vote in November. I rarely hear them speak out about the far left, sin, God’s judgment, our cultural depravity, the drastic spiritual decline, or show concern for the character and morality of our nation as a whole.

Biden has practically endorsed lawlessness and Marxism; this should be concerning to those holding to a biblical worldview!

“The choice before us is plain: Christ or chaos, conviction or compromise, discipline or disintegration… The time is come, it now is, when we ought to hear about the duties and responsibilities of our citizenship.”

Just remember we won’t necessarily be voting for a Democrat or Republican based on how godly he is or is not. The presidency is a secular office. On November 3, we’ll be helping decide the direction of the United States of America – and the contrast between the two main paths could not be more stark.

Should you be Christian and Democrat Today?