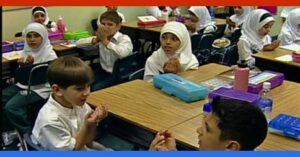 Over four hundred teachers underwent mandatory training in Michigan recently that exalted Islam but denigrated Christianity, America, and white males. The training leads people to believe Islam is the peaceful, true religion while Christianity is a man-made, inferior, false religion.

Richard Thompson, president of the Thomas More Law Center (TMLC) described it as a well-orchestrated Islamic propaganda campaign and said:

“We found that the teachers were subjected to two days of Islamic propaganda, where Islam was glorified, Christianity disparaged, and America bashed…”

But that’s not all!

There’s another lawsuit, this time in Maryland, where high-school students were required to profess the Shahada, the Islamic conversion creed, ‘There is no god but Allah, and Muhammad is the messenger of Allah.’ The school did not allow a Christian student, Caleigh Wood, to opt out, and failed her for refusing to submit.

It’s interesting that Islam is translated as “submission.”

I agree with TMLC’s Richard Thompson that across the U.S. special treatment is being given to the Muslim faith. Government schools do so under the guise of diversity, inclusion, multiculturalism, teaching history and social studies. Would this ever be tolerated if it were Christianity or any other religion? Nope.

In the training, Christian scriptures are described as being “corrupted” while the holy book of Islam, the Quran was said to contain the “pure” word of God. According to the report, of hundreds of teachers attending the workshop, not one teacher challenged the fabrications about Islam, the disrespect toward Christianity or attacks on America.

These cases make me wonder what our great grandparents or even founding fathers would say.

Imagine today’s students in an American school being taught God’s Moral Laws or that Jesus Christ is the Truth and the only way to eternal life. Instead of the Shahada, imagine public schools requiring kids to profess, for example, Romans 10:9-10:

“[I]f you confess with your mouth Jesus as Lord, and believe in your heart that God raised Him from the dead, you will be saved;  for with the heart a person believes, resulting in righteousness, and with the mouth he confesses, resulting in salvation.

But the Bible has long been banned and Jesus was rejected by the U.S. Dept. of Education.

A Freedom of Information Act request filed by the Thomas More Law Center revealed some alarming information about the two-day teacher training session on Islam.  This campaign has been presented in at least nine separate school districts in Michigan, as well as colleges and professional organizations in states including California, Texas, Georgia, and Florida.

Who was the expert hired to train teachers? Huda Essa of Culture Links LLC, who describes herself as an advocate of social justice and encourages children to “take pride in their many identities.” She also claimed that white males are more dangerous than Islamic radicals.

Essa provided no truthful information on Sharia law, jihad, or the harsh treatment of women. All references to terrorism were dismissed as having nothing to do with Islam. She compared Christianity to Islam suggesting they are mostly similar. “The one big difference, she claims, is that Islam is the world’s “only purely monotheistic religion.”

This regardless of the fact Christians believe in one God, consisting of three distinct persons who nevertheless remain one indivisible God. The Father, Jesus, and the Holy Spirit are not three separate Gods with different natures or conflicting agendas. The Great I AM is Creator, Redeemer, Savior, Author of life, Judge of mankind, Sustainer, and Sovereign King who reigns forever.

But according to Essa, the Bible is inferior. But she did not address the fact that the Quran calls for the extermination of Christian and Jews.

“Essa was silent on the 1400 years of actual genocides, also known as jihads, in which Muslims wiped out Jewish tribes on the Arabian Peninsula, and slaughtered millions of Christians throughout the Middle East, North Africa and the European Continent. Novi’s (school district) Islamic teacher-training is just the latest example of professional Islamic indoctrinators infiltrating U.S. public schools even as Christianity has been forced out of the classroom.

Essa claimed Islam is the world’s fastest-growing religion, but conveniently failed to mention Muslims are forbidden to leave the faith or will be subject to severe punishment or death. Forced conversions have been a well-documented fact of history.

Make no mistake; peace is not the final goal, it is submission to Islam and Sharia Law. The Middle East and North Africa were once Christian majorities, but were Islamized by a series of jihads starting with Muhammad and later by the Ottoman Turks.

Here’s more factual information on why Islam and Christianity are incompatible.

Unfortunately, one need only go back to the 1960s when the one true, living God was expelled from most public schools along with voluntary prayer, Bible reading, and even the Ten Commandments. This void not only set the stage for the lack of discipline, unprecedented sexual activity, drugs, and violence; but for many of today’s schools bending over backwards to promote Islam.

What can concerned parents and patriotic Americans do? Raise awareness about the indoctrination of teachers and students. Attend school board meetings. Point out the lack of balance – that favoring one religion over others is unconstitutional. Know what’s being taught in your children’s schools. If necessary, seek legal action.

And make sure you’re constantly teaching your children who God is and who He is not – or the government schools will be happy to teach them for you.