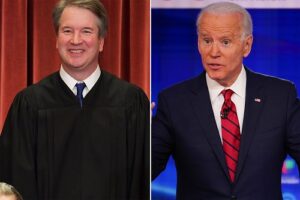 If you believed Christian Blasey Ford – and you do not believe Tara Reade – you may be part of the problem. We’re seeing an infuriating media double standard when it comes to former VP Joe Biden is the Democrat front-runner to run against Donald Trump. Not only should there be serious questions about his health and ability to govern as president, but he is being treated with kid gloves.

As I reported last week, the former Biden employee came forward with sexual assault allegations against him and after a month and a half, it’s barely made headlines. Do you not remember how they treated Justice Brett Kavanaugh?!

This is the first time I’ve done a follow-up story on a weekly article and video, but this liberal hypocrisy must be exposed. Don’t accept it. Shut off the news! All women should be treated fairly.

As for the mainstream media, treat them with the disrespect they deserve for refusing to do their job and serve all Americans, and for being so utterly condescending toward Republicans, conservatives, and Christians across the country.

Even more evidence has come forward, strengthening the claims made against Joe Biden by former aide, Tara Reade, including a clip from Larry King Live in 1993, when Tara Reade’s mother called the live show to talk about a “problem” that her daughter had with a “prominent politician.”

Now, a Joe Bien supporter and former next-door neighbor of Tara Reade’s has come forward to corroborate the story of sexual assault according to a Business Insider report. Lynda LaCasse says she was told about the incident back in the 90’s, and the fact that Reade was upset, crying, and devastated.”

“This happened, and I know it did because I remember talking about it.”

Another witness, a former co-worker also attests that Reade mentioned “harassment” she’d suffered from a boss in DC.

As I reported last week, there is way more credible evidence against Biden than there ever was against Kavanaugh.

How have the Hollywood elites, the media and Democrat Party leaders responded? They’re either downplaying or ignoring the truth. Times change but if the liberals didn’t have double standards they may not have any standards at all.

Old Chuck Schumer called for an FBI investigation into Justice Brett Kavanaugh’s background in light of the false accusations against him. If you’re wondering, no Schumer did not care to see Biden investigated.

And get this: Nancy Pelosi just endorsed Joe Biden for president! That’s right, like Alyssa Milano who also endorsed him and no longer believes all women who come forward with sexual assault allegations, Pelosi exposed her own hypocrisy by doing the same.

Adam Ford at Disrn took some past Pelosi tweets and edited them to show how they would look if Tara Reade were accusing a Republican of sexual assault. He said “Here’s what intellectual honesty would look like on Nancy Pelosi:

‘Every American should be concerned about what the debate around the allegations against (Brett Kavanaugh crossed out) Joe Biden says to young people across our country. We should stand with survivors – not punish them when they decide to speak out. #BelieveSurvivors

I applaud the courage of (Ford’s name crossed out) Tara Reade to come forward to share her story. As we continue to learn more about these allegations against (Judge Kavanaugh crossed out) Joe Biden, we must ensure that Reade’s rights to justice and privacy are respected.

We must #BelieveSurvivors. I’m proud to stand with my Democrat colleagues in support of (Dr. Christine Blasey Ford crossed out) Tara Reade.

You get the idea. So please think about this: Ford could not remember the day, month, or year of her alleged assault. She never told anybody about it at the time, and not one person came forward to corroborate any part her story.

This begs a few questions: is the “believe survivors” just a catchy bumper sticker slogan? Do Democrats really care about all women? Having lost their credibility decades ago, do the liberal media care about truth anymore or just about how the facts will make their Democrat heroes look?

The Daily Wire’s Matt Walsh sums it up:

Reade is accusing a man with a reputation for acting inappropriately towards women, while Kavanaugh, aside from the claims dug up during his nomination hearing, has exactly the opposite reputation.

Jesus Christ said His Word is the truth that sets people free. But many of these people in power are in bondage to a political ideology and as a result they have a godless worldview in which anything goes and evil is called good. They lust for power and will do almost anything to attain it – including lie and overlook their own hypocrisy.

Media Wanted Kavanaugh’s Head, Now Give Biden a Pass
Will America Ever Be United Again?