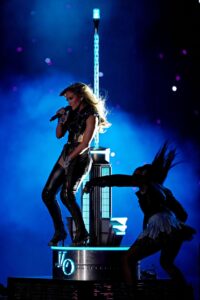 The comments came flooding in on social media following the Pepsi, NFL Super Bowl halftime sex show. Some say it was empowering to women. Really? I saw comments from Grandmothers saying how embarrassed they were watching with their grandchildren.

It was raunchy, offensive, and blatantly sexual, but many feel it was degrading to women. #Metoo! But it sure wasn’t surprising considering it was J-Lo and Shakira.

It was a predictable display of godless entertainment that brought high praise from entertainers like Lady Gaga, Kim Kardashian West, Ryan Seacrest, Olivia Munn, Keith Urban, and many others who are completely out of touch with family values.

Sex sells, but have Americans become hopelessly desensitized? The problem is we keep putting up with it. For women who suggest that seeing older women in good shape, dancing like that was encouraging, I get it – but you’re missing the point.

Knowing the nature of so many awful halftime shows and that this one was going to be controversial, many people just turned off the TV or changed the channel. So some might ask – why bother giving this any attention? Influence.

I don’t need to tell you how much power music, media, and celebrities have on children and young people. Why discuss this? Because every year, millions watch, and that includes impressionable children.

Think about it: what messages did this hyper-sexualized show send? And isn’t it interesting they decry treating women as sex objects – and then turn around and show women using sexuality to perform.

The hypocrisy is astounding!

By saying this performance by Jennifer Lopez and Shakira was offensive, disgusting or disappointing, some claim we’re judging them, unbelievers who need to hear the gospel of forgiveness. Observations and opinions are not the same as condemnation.

As Christians, we are to be set-apart, and we should live up to a higher moral standard of a holy God. Sanctification is a process and simply means being separate from worldliness. But where entertainment is concerned, do we stand out or do we blend in with the world?

Franklin Graham posted on Facebook that he doesn’t expect an unbelieving world to act like Christians, but said:

By the way, did you notice the young women dancing along with the stars of the halftime show? Exactly one year ago, I reported on how this conditioning affects girls. From beauty pageants to dance competitions, coaches and too many irresponsible parents dress children like prostitutes and teach them sexualized routines, just like what we saw Super Bowl Sunday.

Don’t believe me? Check out the short clip of eight year-old girls dancing to a cheering audience in the video here.

Are you beginning to see part of the problem here?

One mom from North Carolina warned that J-Lo and Shakira send a dangerous message, adding:

Another Christian mom said she was witnessing a pagan ritual from Old Testament times while others noticed occult themes or symbols.

And do you really think it’s that big of a stretch to mention the connection between the sexualization of today’s young people, entertainment, pornography, the sex trafficking industry, and abortion? Bingo.

There’s a brand new documentary out called Blind Eyes Opened that not only demonstrates the epidemic of sex trafficking in the United States, but makes a clear case for the fact that the abortion industry enables trafficking to thrive.

In an excellent article for Faithwire, Dan Andros states:

For a group of people who always trumpet the value of “safe spaces,” they certainly don’t seem to care about the consequences of jamming sexually provocative “performances” into programming that families will be watching.

…It’s funny to me how modern musicians think sensually gyrating mostly naked on stage is edgy or cool or powerful. It is none of those things. It is predictable, tired, and debasing.

I know that people do care. I can see that just from the amount of comments that keep coming in from concerned parents and citizens. The problem is our collective silence as Christians in America where entertainment is concerned. I like to call it ‘soul pollution.’

We reap what we sow, and the Bible also tells us to love our neighbors enough to engage and take stands when necessary; to not conform to the ways of this world, and rather than blending in with the darkness, to expose it by shining the light of Christ.