UPDATE (1/12/23): Bill’s Safety Damar Hamlin Released from Buffalo Hospital Wednesday! “Hamlin has returned home to continue his recovery after his collapse on the football field captured the attention of the nation last week, fueling a nationwide prayer movement. He spent two days undergoing tests at Buffalo General Medical Center after being transferred from the University of Cincinnati Medical Center.”

When Damar Hamlin awoke January 4 in a Cincinnati hospital ICU, sedated, fighting for his life and on a breathing tube, one of the first questions he asked via a writing tablet was who won the Bills-Bengals game. Doctors told him, “You won. You’ve won the game of life.”

Just days after the collapse on live TV of Buffalo Bill’s player, Damar Hamlin, he was in critical condition but showed miraculous signs of improvement after suffering cardiac arrest during a Monday Night Football game January 2. Never has a game been canceled due to an injury, but it was the right decision by the NFL.

A bigger part of this story is how our great God used a prime-time football broadcast to unite millions, bring people to their knees, remind us of our mortality, and show Himself strong and worthy of praise.

The 24-year-old Hamlin did not even have a pulse and was not breathing as he lay on the field being attended to by an efficient medical staff who helped save his life. In such a short amount of time, God has used this story to cause people to acknowledge Him. God has also used believers with platforms.

Bills coach, Sean McDermott is a godly man and responded in a press conference to early news that Hamlin was improving to a surprising degree:

“All glory to God for keeping Damar and his family in the palm of His hand, and for His healing power.”

Asked about his leadership which has been given high praise, the six-year head coach said he’s leaning on his faith which “grounds him” while dealing with this traumatic experience. McDermott stated:

“I’m a Christian man to begin with, and I’m not afraid to say that; I know that when you’re trying to do good things or great things, that sometimes you come across opposition.” 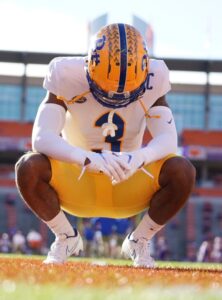 America is also learning more details about the young Hamlin who, during his college days in Pittsburgh (pictured right) just a few years ago said:

“My faith is in God so whatever he has planned for me, that’ll be it.”

This is arguably part of God’s sovereign purpose. He is using Hamlin’s life to bring glory to Himself and to get the attention of a nation that has for all practical purposes, forgotten God. For true believers who have not forgotten Him, Romans 8:28 says,

“And we know that God causes all things to work together for good to those who love God, to those who are called according to His purpose.”

The Buffalo Bill’s safety remains hospitalized while showing encouraging signs of perhaps miraculous improvement, considering just days ago CPR was administered to him for ten minutes on the football field after he collapsed. At the hospital he was on a breathing machine.

According to reports, his lungs are improving, he is “neurologically intact,” and just as amazing – his breathing tube was removed last Friday morning! This was a huge, necessary step in his “remarkable” progress to this point. He was talking to loved ones and also FaceTimed with his teammates, telling the players and coaches, “Love you, boys,” during Friday’s team meeting.

What a great reminder for everybody how precious life is, and especially for believers, Ephesians 5:15-17 states,

So then, be careful how you walk, not as unwise people but as wise, 16 making the most of your time, because the days are evil. 17 Therefore do not be foolish, but understand what the will of the Lord is.

Kudos also to former NFL quarterback and ESPN analyst Dan Orlovsky who publicly bowed his head and openly prayed on the air for Damar Hamlin the day after the game. He said lots of people simply talk about “thoughts and prayers,” but he felt compelled to do it. Here’s Dan Orlovsky’s prayer:

“God we come to you in these moments that we don’t understand, that are hard, because we believe that You’re God and coming to You and praying to You has impact. We’re sad, we’re angry, we want answers, but some things are unanswerable. We just want to pray, truly come to You and pray for strength for Damar, for healing for Damar, for comfort for Damar, to be with his family, to give them peace. If we didn’t believe that prayer … worked, we wouldn’t ask this of You, God. I believe in prayer, we believe in prayer, and we lift up Damar Hamlin’s name in Your name, Amen.”

To my knowledge, Orlovsky was not punished for praying which shows God used this event to receive glory even on the woke, leftist, Disney-owned network, ESPN.

Another former NFL player, Benjamin Watson, an outspoken pro-life Christian, snuck this in during an interview on CNN of all places:

“Life can change in the blink of an eye. Damar’s injury has made us all wrestle with this truth. It has served as a reminder of own mortality. While we pray for him as he fights for his life we also must ask ourselves where will we spend eternity?”

Franklin Graham also commented on the Hamlin story and like him, I was encouraged to see so many people praying, asking others to pray, & recognizing that at a time like this – such a public moment reminding us all of our human frailty – a watching world was reminded that God is there in our time of need.

Aside from everything doctors can do, there are times in life when God, who created our bodies and who gives us life, is the only One who can help. Graham tweeted:

The @BuffaloBills know who to call out to for help! The team dropped to their knees in a circle of prayer after Damar Hamlin was taken away via ambulance. They knew that he needed help that only God can give. Today, millions of people continue to pray for him — & I’m one of them. In this fascinating cultural moment in America, sports fans and others have been captivated by this story and compelled to pray for Hamlin’s recovery. Many have not prayed in years while others are hearing about this young man’s character, compassion, and community work.

Damar Hamlin set up a GoFundMe page last year to help support children in need. It had an initial goal of $2,500. As of a few days ago, donations blasted past 8 million dollars! What does this tell you? People’s hearts were touched by this story and many were moved to action.

As our culture slides deeper into corruption, darkness, and new levels of immorality, I hope this will be one of many needed wake-up calls to God’s people this year (and the entire sports world).

I had my own wake-up call four years ago. Prior to a heart procedure, I had to sign a consent form. Before that, I was told of all the possible risks and complications including a torn heart muscle, punctured lung, torn artery, and partial paralysis, stroke during the operation or even death.” The list of possible risks was long, but the absolute greatest risk we can take in this life is denying God by refusing to believe in His Son, Jesus, and not accepting the free offer of the forgiveness of our sins.

“And there is salvation in no one else; for there is no other name under heaven that has been given among men by which we must be saved.” Acts 4:12

I was at peace going into surgery because I had previously trusted Jesus with my life and knew regardless of the result, it would be a win-win. For believers in Christ, God promises when we die and are absent from this physical body, we will be present with the Lord!

The Bible has much to say about not taking life for granted and redeeming the time. Damar Hamlin’s story is the latest reminder. Look at James 4:13-14;

Come now, you who say, “Today or tomorrow we will go to such and such a city, and spend a year there and engage in business and make a profit.” 14 Yet you do not know what your life will be like tomorrow. For you are just a vapor that appears for a little while, and then vanishes away.

Perspective. It’s one day at a time.

It should also be noted thousands of hard, violent collisions have taken place in NFL games over many, many years. Some players get right back up and keep playing while others have concussions or other injuries. Sports is simply entertainment and sadly, millions have become desensitized to the violence. Most hard-contact plays however, have been much more vicious than the seemingly routine tackle made by Damar Hamlin in last Monday night’s game. 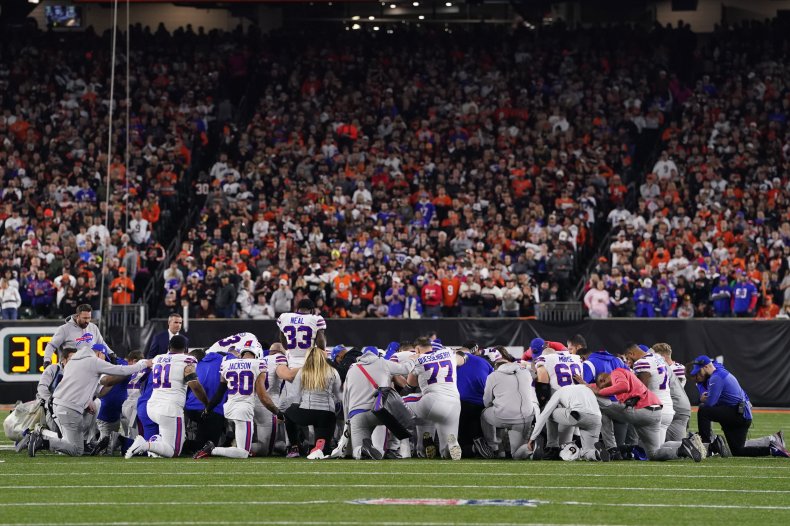 So while it’s astounding something like this hasn’t happened before, as the Lord would allow, Damar Hamlin appears to be on his way to recovery.

I must admit one of my first thoughts was to wonder if a vaccine had anything to do with the way Hamlin got back up after the play and then collapsed. We may never know – and must be at peace with that. To blurt out “conspiracy theory” or suggest as some have, that vax injury is not even a possibility is simply an attempt to shut down debate.

The point to reiterate here is we have changed as a nation regarding public declarations of the Christian faith. Prayer or references to the living God should not make headlines, be offensive, or even surprising. And yet it often is.

But what a blessing it was to see a football team and many fans in an NFL stadium bow their heads in prayer! Moments like this are what’s good about America. Though sadly rare, how refreshing to be reminded that our humanity can unite us, and our nation still turns to prayer in times of crisis.

Though the extent of Hamlin’s recovery is unknown, at this point we can conclude that God saved a young man’s life – in one of the most public ways possible – in order to save countless souls in the process.

Let’s not waste this moment.

Let us trust the Lord to encourage us to be a people of faith and prayer, committed to reach unbelievers with the gospel of Jesus Christ. Our time is short in more ways than one, and Jesus’ promised return is drawing ever so near.

So, what now? Watch and pray!

The Not So Subtle Agenda to Eradicate Christmas
Gaslighting & the ‘Gas Stove’ Strategy: Start With Outrageous, Progress on the Ridiculous