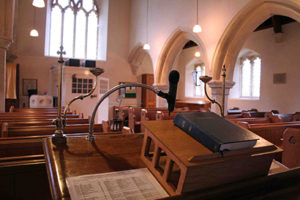 We cannot fix something until we know it is broken. And according to the latest Barna research, the American Church is in dire need of repentance, repair, and revival.

This time, the study focus is on Christian pastors, their philosophy and worldview. It’s common sense and only natural to expect your church leaders to have a proper foundation and understanding of Scripture, but the new nationwide survey of pastors shows a large majority do not even have a biblical worldview.

Yes, you read that correctly. This then begs the question, what in the world are they teaching their congregations?

I’ll get right to one of the takeaways from this new study by quoting the Director of Arizona’s Cultural Research Center, George Barna:

“It certainly seems that if America is going to experience a spiritual revival, that awakening is needed just as desperately in our pulpits as in the pews; …This [research] is another strong piece of evidence that the culture is influencing the American church more than Christian churches are influencing the culture;

The culture has more influence than the church. This is not a shock considering our moral decline over fifty-plus years.

If you’ve read any of my books and articles, you know some of us have been sounding the alarm about this compromise and decay for years.

According to the research, slightly more than a third (37%) of Christian pastors have a biblical worldview and the majority (62%) possess what is referred to as a “hybrid worldview” known as Syncretism.

Syncretism simply means having a combination of different forms of belief or practice, often representing personal preferences. Why is this so disappointing to some? Because in this context, we’re referring to pastors and spiritual leaders who should be deeply established on the truth of Scripture and sound in the doctrine they teach.

One consequence of pastors conforming to worldly influences and philosophies is that the people they lead are likely to also lack a biblical worldview. To be blunt, many churchgoers today are not even converted or they’re in contradiction between what they claim to believe and how they live their lives.

Another observation I thought was fascinating is the fact, according to Barna, “The research indicates that Americans are are more likely to experience a positive impact on their worldview by hanging out with [spiritually active governance engaged conservative Christians] than they are by being in the presence or under the teaching of pastors.” We can translate ‘spiritually active’ to mean obedience to the call to be salt and light in society. Most ‘professing Christians’, on the other hand, are not engaged in culture and are generally quite liberal.

Rather than know, study, and live out God’s Word, too many have a country club mentality or what I refer to as “cotton candy Christianity.” Love is redefined and overemphasized while biblical truth is minimized and seen as too rigid. Others seek to please man and put progressive ideas ahead of the Bible; things that may sound good or compassionate like social justice, diversity, inclusion, equity, and being “welcoming.”

Another concerning part of the new study is even more alarming: only 12% of Children’s and Youth Pastors today have a biblical worldview.

Why does this matter? It is well known that a young person’s worldview primarily develops before their teen years, after which it gets refined into their twenties.

So, another takeaway from the research is the fact seven out of eight youth pastors lack a biblical worldview. These are the so-called leaders of Christian children. This explains why according to Barna, “so few people in the nation’s youngest generations are developing a heart and mind for biblical principles and ways of life.”

Sobering, yes. Irreversible? Probably. Can this be fixed? You tell me. This all contributes to the rejection of truth, delusion, and depravity in our society over the last several decades. America is on the road to destruction and the church is not helping!

In March of this year, I reported on a similar study revealing a mere two (2%) percent of parents of pre-teens in America have a biblical worldview, but a majority of them claim to be Christian.

It is now necessary to clarify and define what it is to be a true believer and how to apply the Bible to our lives. Too many have conformed to this world and not only lack discernment, but a basic understanding of God’s Word. There is disagreement over the essentials of the faith.

Most would say and have said they consider themselves to be a ‘good person’ or Christian. The problem is they don’t have an accurate understanding of what it means to be a disciple or follower of Christ and to trust in Him alone for salvation (apart from good works).

The confusion and disconnect is in part a result of losing focus on the authority of God’s Word, syrupy sermons, topical ‘relevant’ series, a refusal to teach Bible prophecy, accommodation of sin, a fear of man, and failure to address culture, confront evil, and equip the saints.

The reason the new study from Barna is shocking to some and concerning to most is because it exposes great weakness and wokeness in the church. This is more than a chink in the armor. It starts at the top and deals with leadership, Bible ‘teachers,’ CEO pastors, youth leaders, and potential worldview shapers.

This research is disheartening and yet it helps us understand why the American church has generally caved to culture, lost influence, and declined so rapidly. And yet, thank God for the remnant. Hold the line, friends!

The Bible has much to say about men who have crept into the church as well as others who fall away from the truth.

Beloved, while I was making every effort to write you about our common salvation, I felt the necessity to write to you appealing that you contend earnestly for the faith that was once for all time handed down to the saints. 4 For certain people have crept in unnoticed, those who were long beforehand marked out for this condemnation, ungodly persons who turn the grace of our God into indecent behavior and deny our only Master and Lord, Jesus Christ. Jude 1:3-4

‘Contend’ here means to agonize or wrestle. Jude warns against the dangerous practices and doctrines that put the gospel of Jesus Christ in peril. Also, notice that these men apparently went unnoticed! This has happened today across the country in too many churches. We gave the enemy a foothold and the father of lies and of worldly philosophies diluted sound doctrine.

There is a decreasing number of bold pastors and solid men of God today. Find and support them. We now see even more clearly what happened to the preserving salt and guiding light in a nation that desperately needs Christ and was once a strong, shining city on a hill.