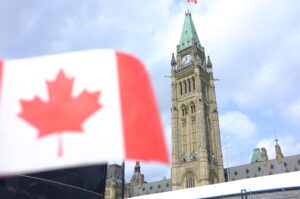 Perhaps more than most nations, Canada is a land where people have felt the heavy hand of government depriving them of free movement for nearly two years, crackdowns many describe as draconian. Justin Trudeau and the Canadian Parliament’s actions have shocked many citizens, but a new law being proposed is one of the most broad and radical to date.

Legislation known as Bill C-36 is something for Americans to keep a close eye on.

Here’s how it would work: Canadians are encouraged to report their fellow citizens to the authorities, and people could then be taken to court and penalized before they even post something online – assuming their motive to be hateful. That’s right. A person can get in trouble for something they are suspected of intending to post (what government defines as) “hate speech” online.

‘So,’ you might ask, ‘someone could be punished for something they haven’t even done yet?’ Yup.

One Canadian citizen, VP of Communications for Substack, Lulu Cheng Meservey called attention to what she referred to as “Alarming aspects” of this new law including:

1) Fuzzy and circular definition of “hateful” speech (“involves detestation…stronger than dislike”) 2) Encouraging citizens to report on one another — creepy 3) The ability to punish people for something they haven’t actually done yet (!)

The Bible refers to the heart of mankind as sick or wicked. What we see today is par for the moral relativistic course and the Romans 1 delusion of the modern, post-Christian depraved mind. Part of Trudeau’s modus operandi seems to be ‘control the opposition.’

My wife is from Toronto and her family and relatives all live there. I called my brother-in-law, Luciano Di Loreto to get his thoughts about this and the first thing he said was, “If everyone was arrested or punished for thinking thoughts that others declare to be hateful, we’d all be in jail…”

He mentioned reading a book about Nazi Germany where citizens were told to spy on their neighbors and turn them over to authorities. We all know how that ended.

Why is it we have such a hard time learning from and remembering past history? That was in the 1930s.

So in the year 2022, according to this legislation, this crime is defined as “a discriminatory practice to communicate or cause to be communicated hate speech by means of the Internet or other means of telecommunication in a context in which the hate speech is likely to foment detestation or vilification of an individual or group of individuals on the basis of a prohibited ground of discrimination.”

If a Canadian citizen “fears on reasonable grounds that another person will commit” hate speech online, or “an offence motivated by bias, prejudice or hate based on race, national or ethnic origin, language, colour, religion, sex, age, mental or physical disability, sexual orientation, gender identity or expression, or any other similar factor,” they can turn in their neighbor by giving the information to a Canadian court.

Let’s be specific here. If you believe the Bible is true, that it is God’s Holy Word, and you desire to live by it’s principles in word and deed, you would be turned in to authorities immediately and without question. Why? Some of the most intolerant people are progressives, Democrat socialists, elites, and globalist minions who are convinced that such Christians are evil, hateful, and need to be punished or re-educated.

Over at Harbingers Daily, editors quoted a guest I’ve had on Stand Up for the Truth podcast, Christian writer Samuel Sey, who recently stated: “Canada isn’t just a post-Christian nation – it’s an anti-Christian nation.” I would add that America is not too far behind. We’ve been warned.

“In recent years, this has often manifested itself through hostility toward those with alternative views regarding COVID lockdowns, vaccine mandates, sexual morality, gender, abortion, climate change, and even the definition of truth itself. It may be surprising for some to learn that often, it is Christian beliefs categorized as unacceptable by Canadian politicians and lawmakers.”

If there was any question about Justin Trudeau’s totalitarian regime and discrimination against Christians, look no further than the case of Pastor Artur Pawlowski, who has spent three weeks now behind bars – without a trial. He was recently denied bail. Having been arrested five times and jailed three times since C’v’d was unleashed on the world, you might think he was a violent criminal. Nope. But as one reported concluded: Canadian officials can’t tell the difference between a criminal and a Christian.

The Canadian pastor is apparently the first person charged with a Canadian law known as the “Critical Infrastructure Defense Act,” which authorizes government to take”extraordinary measures.” What did Pawlowski do? He went to preach at the Cootes border crossing and prayed for the Freedom Convoy. Period.

So, considering this new alarming hate crimes legislation (C-36) and warped worldview, a few changes may be in order to lyrics for O Canada! Why? Its leadership and power elites have abandoned God, reason, truth, and freedom. Oddly enough, the song refers to God as “Ruler Supreme,” and includes phrases such as, “True North, strong and free…”

Trudeau and his deputy have spent the past week introducing measures that mean that anyone who was involved in the protests and anybody who in any way supported the protests will be forced out of the economy.  They ordered Canadian banks to close or freeze the accounts of protestors and their supporters.

How did he become so radical? Nine years ago at a ladies night event, Justin Trudeau clearly indicated his allegiance and radical leftist, freedom-snuffing ideas when he openly declared:

‘There’s a level of admiration I actually have for China; Because their basic dictatorship is allowing them to actually turn their economy around on a dime and say we need to go greenest fastest…”

Let’s not be too quick to look down our noses at Trudeau when we in the U.S. had the most radical and anti-Christian regimes for eight years in Obama-Biden. You can look up quotes from those years of administration officials speaking openly about communist policies or defending the Chinese Communist Party and world dictators, for example.

Remove God and Jesus, the Truth; the Biblical worldview as well as any fixed moral absolutes, and this is what we now see in governments around the world hoping to usher in godless globalism, also known as a New World Order. It’s coming. And it’s all prophetic.

But this doesn’t mean we should turn on our neighbors, approve of evil by cheering it on, or help speed things along by electing God-haters to lead and (supposedly) serve people created in His image. Always remember Jesus liberates and saves; burdensome government enslaves. The only lasting answer is the gospel of peace.