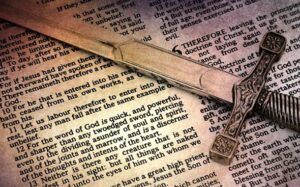 Modern Liberalism cannot coexist with biblical Christianity. Another example of placing social justice above Scripture emerged last week, this time from a Baptist church leader in Texas. In a commencement benediction at Baylor University in Waco, left-wing pastor, Dan Freemyer denounced “straight white men” and lobbied for the environment – during a prayer.

Fine. If you disagree with certain aspects of God’s Word and dislike Christian conservatives, this is a free country. But stop being a progressive pretender and admit you’re either following the crowd or creating a god in your own likeness.

Calling evil good, conforming to secular culture, and reinterpreting Christian teachings to fit an agenda is part of the cult of modern Liberalism which masquerades as Christianity.  In their rebellion against God, their values might include hyper-grace, political idolatry, boycotting Israel, feminism, socialism, sexual confusion, environmentalism, and of course, abortion.

In these last days, the Holy Scriptures too often take a back seat to pleasing man. In this case, it’s Broadway Baptist Church in Fort Worth, Texas, which proudly states they are: “fully affirming of women in lay and professional ministry roles, and fully inclusive of LGBTQ+ persons.” One Baylor alumnus proudly stated that Broadway Baptist cut ties with the Baptist General Convention of Texas long ago over homosexuality.

Affirming, inclusive. Friends in Christ, don’t be deceived by the modern use of these words. I wrote an entire book about man “Redefining Truth.”

So a few of the remarks from Dan Freemyer at the Baylor University commencement went like this:

“God, give them the moral imagination to reject the old keys that we’re trying to give them to a planet that we’re poisoning by running it on fossil fuels and misplaced priorities — a planet with too many straight, white men like me behind the steering wheel while others have been expected to sit quietly at the back of the bus,”

Misplaced priorities is right, but look in the mirror, Dan. In your rant about poisoning the planet, you missed an opportunity to honor Jesus Christ and the true gospel by encouraging the college grads to seek first the kingdom of God. You could have reminded them about the need for repentance and to walk closely with the Lord every day as they enter a very dark and worldly culture.

By alluding to environmental activism, climate change, and by subtly dissing God-ordained natural marriage, you were exposed as just another religious liberal, also known as a wolf in sheep’s clothing. Using your platform and position as cover for a secular, social justice agenda is apostasy.

By appealing to people’s love of this world and taking advantage of their ignorance, plenty of false Christian leaders are deceiving multitudes while true believers in Christ have been placed on the defensive today. The octopus of liberalism now dominates virtually every aspect of culture.

The Left practically controls education, organizations, publications, the entertainment industry, government, and especially the media. The tragedy however, is that liberalism has gained power and influence in seminaries as well as in church pulpits across the country.

One result is Americans are more divided over moral and political issues than ever before, but our greater concern should be Christians are divided as well. Research shows that fewer believe in absolute truth which tells us we aren’t much different from the world after all.

How could this be since God never changes and His Word is eternal? They do a good job of changing public opinion by emotion-driven marketing.

Some call it a revival of post modernism, liberation theology, progressivism, or social justice. Many of these leaders hold to a form of godliness but they deny the power of God (2 Tim. 3:5) and attack those who stand on the inerrancy of Scripture.

So why does all this matter and why is it dangerous? Political liberals are one thing; we know exactly where they stand; radicals on the left like Pelosi, Booker, Beto, Buttigieg, AOC, and Sanders.

But religious liberals have infiltrated churches across America and have deceived many. These men (and women) generally believe many of the same things as extremists on the left, and yet claim to be “Christian.” You will know them by the fruit they produce and by their doctrine. They are masters at twisting Scriptures.

This is nothing new and the emerging church has been gaining converts for decades. Until we acknowledge the enemy within, know God’s Word and combat lies with the truth, people will just keep on buying what liberalism has been selling. Because after all, they have a degree or a title; he’s a pastor, priest, or reverend.

The Bible is full of warnings to discern false teachings, call out deceivers, expose the darkness, and contend for the faith handed down through the ages. Put on the armor of God! The main obstacles to the left’s takeover of America are strong, biblical churches and mature, informed Christian citizens who refuse to be silent.