By David Fiorazo on May 10, 2019 in Biblical Worldview, Christianity in America, David’s Blog, Jesus Christ, Progressive Christianity, The Gospel 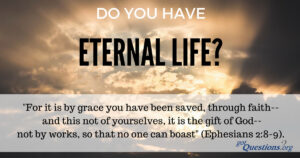 What must I do to be saved? There is no better question or a more important one that could be asked.

This question demonstrates that this man, like all people by nature, had an orientation towards earning eternal life. He wanted to know what good work or noble deed he could do to inherit eternal life. We want to achieve, to strive, to get.

But Jesus cried out on the cross, “It is finished!” What did that mean? The world and its religions proclaim, “do, do, do… Christianity says, “Done.” He completed the work; our part in salvation is to believe.

All three gospels (Matthew, Mark, and Luke) tell us this man was rich. Matthew tells us he was young, and Luke tells us he was a ruler. Think about a person today who is young and has the world’s wealth. That person doesn’t typically concern himself with the future and especially with eternal things.

WOULD YOU CONSIDER YOURSELF A GOOD PERSON?

It’s likely that four out of five people in this world would say they are a “good person.” This begs the question; can someone be good without believing in Jesus or having any knowledge of God? This is not to ask if you can do good things. Atheists can do good.

It was as if Jesus said, “You come to Me asking about what good thing you can do to inherit eternal life. But what do you really know about goodness?”

“The argument is clear: either Jesus was good, or he ought not to have called him good; but since there is none good but God, Jesus who is good must be God.” (Charles Spurgeon)

Christ shows him his error. The young man desired to know how he might “get” eternal life. Jesus tells him how he might “enter” life by faith, obedience, and sacrifice. He is the Way, He truly is our Life, and part of our journey must include sanctification as well as keeping the commandments, which is law, not gospel.

And this is His commandment: that we should believe on the name of His Son Jesus Christ and love one another, as He gave us commandment. 1 John 3:23

Verses 18-20: Jesus tests him by the aspects of the Mosaic Law that deal with man’s relationship with others. The Lord lists five of the six commandments known as the second table of the Ten Commandments.

All these I have kept… The young ruler claims to fulfill all God’s commands regarding how we must treat other people, but it isn’t enough; we must do right by God. The young man’s response appears to be prideful and show an overconfidence of his own merit.

But Mark 10:21 says Jesus loved him and had compassion on this man, who was so misguided as to think that he really could justify himself before God.

What do I still lack? This alone tells us that this man had not perfectly kept the law or was convinced he still fell short somewhere. We soon find that he loved the world.

Do not love the world or the things in the world. If anyone loves the world, the love of the Father is not in him.

Verses 21-22 – Go sell your possessions and give to the poor: Jesus was not setting forth terms for salvation here; He exposed the young man’s heart.

We often may make the mistake of assuming this applies to everyone, when Jesus never made this a general command to all who would follow Him. He addressed this one young man whose riches were clearly an obstacle to his discipleship.

“Follow Me.” Jesus used similar words when calling many of His disciples. In this, the wealthy questioner failed utterly. Money was his god; he was guilty of idolatry.

The call to forsake everything and follow Jesus is a call of inclusion, to seek God first and put Him first in all things. But the man had worldly wealth and could not let go – even for something far greater.

Here’s the principle: God may challenge and require an individual to give something up for the sake of His kingdom that He still allows to someone else.

The young man walked away “Sorrowful, for he had great riches.” Upon leaving, he is now miserable even while he possessed them! And so here’s another warning to us about putting worldly goods in the place of the supreme God.

To embrace and follow Christ, we must hold other things loosely.

WITH GOD, ALL THINGS ARE POSSIBLE!

Was Jesus teaching that riches are an obstacle to the kingdom? For some, yes. In America today, who among us would not be considered rich compared to the world? Why is wealth such a problem when it comes to eternal things? Because it tends to make us satisfied with this life, instead of longing for the age to come. Randy Alcorn stated:

In what does your security rest? A house, savings, investments, retirement plan? These will all pass away, but the word of the Lord endures forever. One problem with riches is they encourage a spirit of false independence, very much like the church of Laodicea which Jesus rebuked.

He said they were a lukewarm. Revelation 3:17 states:

Because you say, ‘I am rich, have become wealthy, and have need of nothing’—and do not know that you are wretched, miserable, poor, blind, and naked…

How much does this sound like American Christianity and ‘Your best life now’ theology? The poison of the prosperity gospel is just one of many false teachings leading us to expect or even demand God bless us – and in the way we desire.

Vs. 25 – They were greatly astonished/exceedingly amazed: The great amazement of the disciples was based on the assumption at the time that riches were always a sign of God’s blessing and favor. (Isn’t this prosperity gospel theology today?) It was common to think that the rich were the most likely candidates for heaven, but salvation is possible only through divine grace.

In a culture where a religious teacher was expected to be at least moderately wealthy, the lifestyle of Jesus and his disciples was conspicuously different. Perhaps the disciples hoped that their following Jesus would make them rich and influential, or prominent leaders in His Messianic government.

Verse 26: But Jesus looked at them and said to them,

“With men this is impossible, but with God all things are possible.”

A committed disciple of Christ can do good things with money. Consider examples of people like Zaccheus, Joseph of Arimathea, and Barnabas. These were rich men still able to put God above their riches.

It’s important to see what Jesus did NOT say here: That all poor people make it to heaven. He also did NOT say no one who is wealthy can enter the kingdom of heaven. That would exclude Abraham, Isaac, and Jacob, Joshua, David, and others.

Verse 27-30 – Peter’s blunt question: What shall we have… what do we get for following You? Note that Jesus did not rebuke Peter’s claim of leaving everything behind.

Some disciples did leave all to follow Jesus, including wives and perhaps children to provide for – so what would be their reward? Other than resurrected bodies, administration in the millennial Kingdom. 12 disciples will be the judges of the twelve tribes of Israel. The N.T. principle here is we are blessed to suffer for Christ and blessed to enter His glory as well.

After all, what have any of us to lose for Jesus compared with what we gain by him? Whatever has been given up for Him will be returned to us a hundred times over – in addition to everlasting life. The return may most likely be spiritual instead of material.

19:28 – …in the regeneration… here is a different meaning for this word. Luke writes:

Repent therefore and be converted, that your sins may be blotted out, so that times of refreshing may come from the presence of the Lord, 20 and that He may send Jesus Christ, who was preached to you before, 21 whom heaven must receive until the times of restoration of all things, which God has spoken by the mouth of all His holy prophets since the world began. Acts 3:19-21

So for Christians, a biblical attitude would be to think that there’s nothing too much to do, nothing too hard to suffer, nothing too dear to part with – for Him and for eternity.

Verse 30: “But many who are first will be last, and the last first.”

We usually believe the opposite of what Jesus said here: that the first will be first and the last will be last. The statement seems to imply that everyone ends up the same when it comes to inheriting eternal life. The thief on the cross and many others didn’t have time to study Scripture and grow in the spiritual disciplines.

Another application may be that sometimes those who are converted later in life outgain those who were converted earlier. Regarding the late bloomers out there, Matthew Henry elaborates on this, saying,

“That many who being last, and promise little in religion, sometimes, by the blessing of God, arrive at greater attainments in knowledge, grace, and usefulness than others whose entrance was more early, and who seemed more promising.”

*This idea continues in chapter 20 in the parable of the workers in the vineyard.

But what does it say? “The word is near you, in your mouth and in your heart”—that is, the word of faith which we are preaching, 9 that if you confess with your mouth Jesus as Lord, and believe in your heart that God raised Him from the dead, you will be saved; 10 for with the heart a person believes, resulting in righteousness, and with the mouth he confesses, resulting in salvation. 11 For the Scripture says, “Whoever believes in Him will not be disappointed.” 12 For there is no distinction between Jew and Greek; for the same Lord is Lord of all, abounding in riches for all who call on Him; 13 for “Whoever will call on the name of the Lord will be saved.” Romans 10:8-10

What is Eternal Life?

How can I be Saved?

Who do You Say Jesus Is?

Joel Osteen and Deceptive Prosperity Preaching
Bullying OK – if the Bullies are Liberal?