By David Fiorazo on May 14, 2019 in Abortion, Biblical Worldview, Christianity in America, David’s Blog, Planned Parenthood, Political and Moral issues

Why is there no outcry from the media on the increased bullying of pro-life Christians? Because the bullies are liberal. Godless, pro-abortion activists are more emboldened now, and cases of physical attacks are becoming more frequent.

Pro-lifers praying on public sidewalks are cussed out and mocked, displays are vandalized, liberal students joke about aborted fetuses, an 82 year-old woman attacked and hospitalized, Pennsylvania Democrat, Brian Sims bullies women praying outside an abortion clinic… The left is out of control, but we must not stoop to their level of hate, intolerance, and lack of civility. 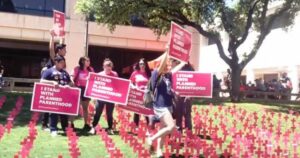 Hollywood, the media, and public schools and universities are making disciples. For decades now, they have indoctrinated and misinformed countless people to the point they’re now easily triggered by those who have a different view – especially on abortion.

Some of the loudest voices for tolerance have very little tolerance for Christians, and this hypocrisy is practically ignored.

But the good news is Christian and conservative pro-life supporters across the U.S. are not backing down. A huge rally was held last Friday in Philadelphia in response to Planned Parenthood advocate, Representative Brian Sims, harassing pro-life women outside a clinic there.

That same Philly clinic, by the way, has failed their last twenty-three patient safety inspections! Sadly, the abortion business is the least-regulated industry in America. Even with this many failures, there is no indication this clinic was ever fined, penalized or forced to closed until the failures have been remedied.

The complicit media and those who claim they care about women’s health just turn the other way.

Sims actually filmed himself berating peaceful pro-life supporters, including teenage girls. The Pennsylvania Democrat actually posted the video where he harassed a woman who was quietly walking the sidewalk outside the abortion business and praying. He called her “shameful,” “disgusting,” “racist,” and an “old white lady.”

Let’s consider Sim’s accusation of “racist” for a minute. There are now more black babies aborted than born in New York City, home of the very first Planned Parenthood clinic. We want to save black babies – as well as all the others – while Democrats want to continue disposing of them – or at least fighting for the right of others to do so. Philadelphia already had become infamous for its gruesome history involving convicted serial killer, Kermit Gosnell, whose abortion clinic killing spree was so notorious a movie was made to tell the story.

Just like the media ignored the Gosnell murder trial for fear of exposing the truth about abortion practices, they looks the other way to cover for abortion activists. We get it; it’s all about loyalty to liberalism. So all we can do is draw attention to instances of activists lashing out, and encourage others to respond with patience and self-control.

Another disturbing story took place at the University of Texas-San Antonio recently. Planned Parenthood activists showed up to mock a memorial of 911 pink crosses in the grass that Students for Life set up to represent babies who never got to live. Why? Planned Parenthood commits 911 abortions a day, affecting countless families across the country.

The protesters had signs and yelled about how they love abortion; one even pointed to the crosses and said, “Look, there’s mine right there.” One student said that she loves to have sex just to abort fetuses. Later they came and stood in the middle of the pink crosses and a girl proudly yelled, “I’ve had an abortion!” They also chanted, “Hey, stop, what’s that sound, all the fetuses are in the ground.”

Up north, a similar memorial display was created at the University of Michigan, and pro-abortion students were caught on video ripping crosses out of the ground and throwing them in a trash bag. Someone asked a purple-haired feminist, “Is there a reason why you’re doing this?” With no hesitation, she responded, ‘’because we disagree with it.”

She then insisted the crosses were garbage and continued throwing them away!

In Louisville, Kentucky, 82-year-old Donna Durning has often been praying outside the Women’s Surgical Center for many years encouraging young women and offering help if they need to talk to someone. She was recently assaulted by a woman leaving the abortion clinic who shoved her to the ground where Durning sustained a broken leg and cut on her forehead.

She was rushed to the hospital where her femur was surgically repaired. Fortunately, the attack was captured by a street surveillance camera. Describing the incident, Durning stated:

“She turned and looked at me, and I gave her a sweet little card. …I said, ‘Honey, this is for you; if you want to talk to somebody, there’s a phone number there.’ She grabbed me by both shoulders and literally threw me to the ground.”

In the heartbreaking video, the assailant simply turns away from her elderly, screaming victim and jumps into a car which speeds away from the scene.

The Left is full of equal opportunity activists who attack others regardless of age. Ask Ron, an 85-year-old who was recently attacked outside a Planned Parenthood Clinic in San Francisco during in a peaceful protest with 40 Days For Life. A young male abortion activist tried stealing the sign he was holding, and shoved Ron to ground kicking and threatening him.

Then there’s Austin Beigel, with pro-life organization, Created Equal, attacked at the University of North Carolina-Chapel Hill by still another pro-abortion activist during a campaign called “Road Trip for Life.” Just moments after setting up photos of preborn infants as well as graphic abortion images, a woman who has since been charged with misdemeanor assault, confronted him and punched him several times.

These angry people have a messed-up thought process and have been programmed to act out of emotion.

Because every one of us has a God-given conscience, they know deep down, they’re wrong. But notice how Beigel responded. After video of the incident was published on line, he went on Facebook to encourage people to pray for the woman who attacked him. Amen, brother.

Beigel said his faith motivates him to give people the grace God has given him, and that faith is an inseparable part of [creation and] the pro-life message. Though it’s important to know the facts about biology and science, we also need to explain why abortion is morally wrong. He states:

“To actually tell someone why something is wrong, I have to appeal to a standard, and the standard of where I get my morality comes from God himself, which is the ultimate standard,” he said. “So when we’re dealing with these tough issues, I use the Bible as a clarification tool to understand. I use it as my lens, through which I view the world.”

People can deny facts and reality, but always remember this: the truth is on our side.

So, how do we respond to bullying and hate? Love, grace, and forgiveness. It’s not easy, but the Apostle Peter reminds us:

…But if you suffer for doing good and you endure it, this is commendable before God. To this you were called, because Christ suffered for you, leaving you an example, that you should follow in his steps. “He committed no sin, and no deceit was found in his mouth.” When they hurled their insults at him, he did not retaliate; when he suffered, he made no threats. Instead, he entrusted himself to him who judges justly. 1 Peter 2:20-23

God will have the final say, and He promises justice in the end for all who are oppressed. But we must be ready for more of what we’re seeing – increased discrimination against true Christians in America.

Last week, Vice President Mike Pence spoke at Liberty University and warned graduates they should be prepared to face discrimination and ridicule because of their religious beliefs. “Throughout most of American history, it’s been pretty easy to call yourself Christian,” Pence said. “It didn’t even occur to people that you might be shunned or ridiculed for defending the teachings of the Bible.”

What we’re seeing is rebellion against the only living God as Christians face unrelenting attacks from abortion extremists as well as the LGBTQ mob. In the past I’d get really angry and frustrated about this, but now I really feel sorry for those who follow empty talking points and whose only hope is in this short life. They’re deceived and they need Christ; pray for them.

Just like the movie, Unplanned, even the most committed abortion activists and Planned Parenthood apologists can have a change of heart when God gets a hold of them with the truth. But to do this, he uses people like you and me.

How Do ‘Good’ or Rich People Enter the Kingdom of Heaven?
Jim Carrey, Alyssa Milano Unwittingly Help Pro-Life Cause