As I drove by what may be the only Planned Parenthood clinic in Wisconsin yesterday, on the sidewalk out front was a woman holding a “Defend Life” sign with a photo of a baby. God bless her and all those who have taken action, prayed, or raise awareness about the ongoing slaughter of life in mother’s wombs across the land.

Most of us know what the Bible teaches about the value of every human life. Heck, even the animal kingdom knows how to protect their own. And yet, according to our laws, eliminating life in the womb for any reason is legal and acceptable including late term, partial-birth abortion.

This regardless of the fact science and biology now confirm a baby’s heart starts beating 22 days after conception, and they can feel pain by at least 20 weeks.

But do we really know when life begins? This question was asked during legal arguments in the Supreme Court case, Roe V. Wade in 1972-73. Granted, they did not have the advances in technology we do today including sonograms and ultrasound. They did have the Word of God – and ignored it completely.

That was 45 years ago. What’s our excuse today and where is the church?

Also available are the many undercover videos of Planned Parenthood employee’s convicting admissions, so we can no longer say abortion is not pure evil being promoted as a choice, a right, and a service. The progressive media won’t touch news stories when they reflect negatively on their precious political party and the abortion industry.

In 2010 for example: “Little Shop of Horrors” Abortion Clinic Closed When Frozen Bodies of 35 Aborted Babies Were Found.” Abortion practitioners in Maryland were found guilty of murder and a host of other crimes. The good news is now the building that the former illegal business was using is now the home of a Pregnancy Center serving women with life-saving care.

These stories are out there and have been for a few decades, and they’re only shocking perhaps to Christians who have turned a blind eye to our culture of death and have knowingly gone on with their busy entertainment-filled lives. Remember abortionist and convicted serial killer, Kermit Gosnell? What about the dark history of Planned Parenthood’s Margaret Sanger?

This isn’t about politics; it’s about life and the right to be born. For years I’ve written about this battle and am thankful for those who also believe this is a pivotal moral issue in a country with a seared conscience. Some say a society is judged by how the most needy and vulnerable are treated. If this is true, we’re in a lot of trouble with our Maker.

We ignore the moral decline because too many Christians in America have “progressed” from accepting what the Bible considers sin to accommodating sinners or even celebrating sin in various popular forms.

There is a huge difference between accommodating and loving sinners -those who need the truth of the gospel that includes the satisfied wrath of God through the sacrifice of Jesus Christ.

One more example of our indifference is the fact a major report was done last year when the U.S. Senate Judiciary Committee published a 500-page report on Planned Parenthood. With decades of destroying human lives and of corrupt practices, the report was a glimpse into the dark, chilling world of selling human baby body parts.

It is a sick, twisted industry and federal law is very clear: it is illegal to make a profit from the body parts or specimens of fetuses or parts of any human. But the documents subpoenaed from Planned Parenthood and related companies show how the law was completely and willfully ignored.

Representative Diane Black said the report should “incense all people of conscience.”

“Over the last year, the Select Panel’s relentless fact-finding investigation has laid bare the grisly reality of an abortion industry that is driven by profit, unconcerned by matters of basic ethics and, too often, non-compliant with the few laws we have to protect the safety of women and their unborn children,”

Without getting into extensive details of the House investigation, the panel concluded and recommended Planned Parenthood must be defunded. After receiving more than $4 billion from American taxpayers over the last decade, Congress should make Planned Parenthood ineligible to receive federal tax dollars and instead, redirect those funds to the thousands of low-cost health clinics that do not sell abortions.

The panel also recommended Congress take action to protect women and infants from unscrupulous tissue procurement practices, and from the repeated failure to report the sexual abuse of young girls. By far, the abortion industry is one of the least regulated in America so it’s business as usual for them.

Plenty of statistics show eugenicist and racist, Margaret Sanger’s mission not only continues today, but truth is often buried or denied. According to the Center for Disease Control, over 35% of aborted babies in America are black.

However, more citizens appear to be changing their minds as polls generally show most people (one poll, 84%) think there should be restrictions on abortion. A majority overwhelmingly believe our tax dollars should not be helping fund Planned Parenthood. Hollywood, the government, the education system, and the media do not appear to be siding with the majority of the people on this issue.

Some former abortion clinics have turned into life-affirming pregnancy centers in recent years include two in Iowa, two in Miami, one in Toledo, Ohio, and a former flagship Planned Parenthood building in Bryan, Texas, that now houses 40 Days for Life and a pregnancy help medical clinic. Some prayers are bring answered.

There is some momentum for the pro-life movement, but this is not time to celebrate. America has blood on its hands. Much damage has been done and every other week it seems another young woman is taken to the emergency room due to a botched abortion. It’s also clear we are simply too busy to care or do much to reverse one of the most evil, unjust Supreme Court decisions in this nation’s history.

What can we do? Keep believing, keep raising awareness, keep voting for life, and keep praying; but don’t hold your breath. 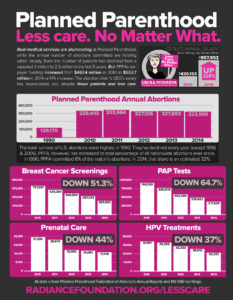 Abortion Hurts Us All, Especially Women – Part 2, The Anguish of Abortion