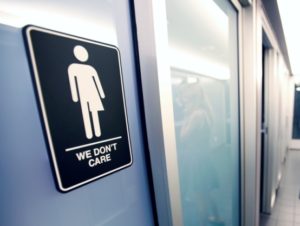 Rather than change its controversial transgender bathroom policy, Target Corporation is now planning to spend $20 million to add private single-stall bathrooms at all of its stores. The report directly cited a dramatic drop in shopper traffic, company stock, and loss of revenue partly due to the retailer’s “transgender-friendly” policy.

Then, I shook my head while watching the Olympics last night as an announcer on NBC pointed out South Africa’s Caster Semenya easily won the gold medal in the women’s 800 meter. (Note: she is not technically a transgender but apparently suffers from a very rare condition called hyperandrogenism)

Sadly, NBC used Semenya to promote transgenderism during the Olympics, including this half truth:

“It’s really a confusing issue and even scientists have not come to a consensus on it.”

Many psychiatrists and scientists however, have said it is a mental disorder and “sex change” is impossible.

Just because corporations, Hollywood, government, and the media are pushing this politically-correct immorality on America, it doesn’t mean we have to accept it into our homes and churches. But too many people; parents, pastors, and politicians have already waved the white flag.

Tired of the cultural battles, public pressure, and the narcissism we have embraced as a society, it’s easier to look the other way than to confront others with the truth. Many people who once claimed this was all about “equality” and “love” are now admitting they bought the lie. Do you think the left will back off its agenda of conquest and submission?

In addition to the silence from most Christians on these issues, we have not successfully defined the terms. In the most intense public debates and battles over words and meanings, what I’ve realized is we often use the same terminology, but have vastly different dictionaries!

After all, the Supreme Court basically decided marriage is whatever one wants it to be – as long as it is not limited to one man and one woman as God naturally ordained it from the beginning.

We are learning the hard way. No longer tolerated are moral beliefs and ideas that go against the pursuit of sexual satisfaction at any cost.

Another problem in our society is there is often one critical, glaring omission from the debate over sex, gender, birth, and biology: truth!

“Truth always carries with it confrontation. Truth demands confrontation; loving confrontation nevertheless. If our reflex action is always accommodation regardless of the centrality of the truth involved, there is something wrong.”

Are there any fixed historical absolutes we can refer to in this battle for the heart and soul of our nation? If not, anything goes, right? Many have accommodated this new religion of sex while at the same time, failing to stand up for truth, decency, and biblical morality.

For example, are you okay with the fact your children will now be learning there is nothing permanent, definite, or unchangeable about them and that every aspect of their identity is subjective? In a way, this is encouraging kids to be their own gods.

New transgender-affirming policies are about to be implemented in public schools as kids prepare to go back to school in a few weeks. As Todd Starnes reports:

…boys who identify as girls would be permitted to participate on overnight all-girl field trips. That’s a rule sure to be a hit among the 13-year-olds. Another guideline indicates parents could be left out of their child’s gender decision-making.

Soon, your kindergartner will learn he or she can choose their own gender and corresponding bathroom based on how they feel and what they’ve been told. Soon, more boys will be girls will be boys, if that even makes sense.

If you don’t believe me, there is a radical leftist group working with the public schools and ready to unleash unprecedented sexual confusion on young people. Trans Student Education Resources (TSER) has created a ‘gender unicorn’ cartoon character for kids to learn about gender identity and expression in the classroom.  They describe themselves as “an organization dedicated to transforming the educational environment.”

The make-believe character is used to explain terms like questioning, queer, cis gender, non-binary, and gender nonconforming. I wish I were making this up. These extremists even believe the terms “biological sex” are offensive and “harmful” to transgender people. Why? Could it be because the truth points back to science, the laws of nature and nature’s God?

Christian parents, be honest about this. Can you expect your children to withstand thousands of hours of liberal, LGBT indoctrination, along with the peer pressure to conform to culture and away from anything having to do with Christ? Can you expect your kids to be strong enough to resist the ridicule, attacks, and secularism in their school if they admit they are Christians?

Jesus never sent kids into the world, He commissioned adults who He personally discipled as well as true believers after them. The early disciples were taught, tested, and trained in the inerrant truth of Scripture and the persecution by leaders of that day.

I’ve heard stories of heartbroken parents saying they thought their kids were strong enough to handle it, or they never thought their son or daughter would have problems in school only to realize it didn’t take long for them to turn from God. They can go to church with you once a week, but they spend nearly seventy hours a week influenced by friends, music, teachers, Hollywood, social media and various machines.

And when a child or teenager comes home from school and tells their Christian parents they don’t believe in God anymore, don’t think they are a boy/girl anymore, or say they just want to ‘love who they want to love,’ too many well-meaning parents accommodate them.

It may take lots of effort to work with them and still there are no guarantees they would come back but it’s important to at least understand this is not just a phase they are going through: they are being converted and programmed.

And it’s not just the kids.

How many times have you heard someone say: we need to love them through it, not judge them? I agree; but how? I’m sure you’ve also heard, “we need to accept them for who they are.” The next time someone says this, please ask them what they mean by acceptance. Is sex love? Ask them to defend their position.

Moreover, do Hollywood and the National Education Association have the same definition of love as the Bible? Is it loving to let someone live a lie or to accommodate their behavior no matter what they choose even if it ends up destroying their lives? Is it wise to accept kids for who they are when they don’t even know who they are?

Every human being was created in the image of the God of love, and He gave His only Son as a sacrifice for our sins. It’s true, He loves us that much! Sin separated us from God, but Jesus was willing to bridge that massive gap by overcoming death. He said, “Greater love has no one than this: to lay down his life for his friends (John 15:13).”

If we love others we will tell them the hard truth. So please don’t be silent, there’s been enough of that and it has only led to more compromise and confusion. Speak the truth – and do it a loving way (Ephesians 4:15). It is possible and necessary to do both!

The Cult of Transgender

Transgender edict: you will be made to care

But They Said it was Not Agenda

BREAKING: Almost Everything the Media Tell You About Sexual Orientation and Gender Identity Is Wrong

Why the Fuss and Fury over Repealing the Johnson Amendment?
The Anguish of Abortion, part 1, The Cost of Our Silence excerpt

2 Responses to Accommodating Lies in the Transgender Debate