By David Fiorazo on May 2, 2016 in American History, David’s Blog, LGBTQ, Religious Freedom 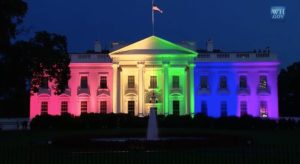 From a rainbow-colored White House to corporations proudly promoting political correctness, it is difficult to deny the spiritual and moral decline in our country. Knowing these events do not happen by chance, what are the causes of cultural decomposition and what can be done to save this nation?

Start by saving the people from eternal destruction. To do this, truth must be told. It is nearly impossible to correct America’s direction and slow the decline if enough people are not convinced that we are way off course to begin with or if we are unwilling to learn from history.

Those who understand we are in the last days know there are two major causes to the negative effects we are seeing in America today: the success of secular agendas to blot out God and eradicate Christian morality, and the complacency of we the people.

There have always been enemies of Jesus Christ in every society working to kill, steal, and destroy lives and nations; we can deny this fact or face it. We are in a war, and the most concerning thing to me is apathy among the people of God.

How many Christians do you think really want to speak up and stand up, in part by openly living their biblical values knowing we have all but surrendered the public square? Now that Christians are blatantly and purposefully criticized, mocked, and ridiculed, why should we resist the onslaught of evil?

Many believers would much rather live comfortably and avoid the earthly hassles knowing we’re living in the end times and when Christ returns, we’re out of here. But is this what we’re living for – to have smooth, stress-free, comfortable lives or should we be about the Lord’s business of saving souls and fighting the good fight of faith?

As more of us remain on the sidelines, “good” is not winning and the culture is rapidly caving in to secular humanism, liberalism, and the LGBT agenda. Author Peter Heck stated:

They know the success of their cause depends upon the total abolishing of the Judeo-Christian ethic and the Moral Authority it teaches. That is why any belief that the homosexual lobby is merely a passive group of individuals wanting to peacefully coexist with others who have different beliefs and values is naively absurd.

Perhaps we should rethink those “coexist” bumper stickers; it doesn’t work for Islam and it won’t work for the LGBT.

The Bible instructs God’s children to live with a sense of urgency knowing the time is short and yet, His patience means salvation. Regardless of the sin, we must love and have compassion on them; especially on those struggling or sincerely confused – even the activists who hate the God we believe in. Let’s reach out to sinners because we were also hopeless, lost, and most likely, someone reached out to us.

Our first priority then is to trust in, know and love Jesus Christ; the second is to preach the gospel and make disciples, not just converts; third is to impact culture for righteousness which really is a byproduct of living the first two priorities.

So why isn’t there more evidence of a preserving influence (salt) in this nation as well as a concentrated effort to expose the darkness (light) and point people to the only living God and Savior?

With a majority of American citizens professing to be Christians, we have reached a point in which Christianity is having much less impact on culture than culture is having on us. Another big problem is people don’t see this as a problem! Believers all around us have conformed to this world rather than be transformed by the renewing of their minds through God’s Word and truth. As a result, America is sick and suffering the consequences.

A pivotal difference between Christians and the opposition is those on the Left understand one major key many of us have lost sight of long ago: influence is everything.

If we don’t influence our churches, communities, and culture, someone else gladly will.

In case you missed this last week, House Minority Leader and proud liberal Democrat, Nancy Pelosi came right out and admitted what many of us already knew: they had an agenda to transform America for godlessness. In a press conference, she suggested that same-sex marriage isn’t nearly as popular as people insist it is. Huh?!

Pelosi admitted that when Barack Obama became president and the Democrats came into the majority, their goal was to make homosexual marriage the law of the land. With thirty states having protections on God-ordained, natural marriage through the votes of millions of people per state, the Democrats could not accomplish this goal “legislatively” so they worked to achieve it through “the courts.”

“We had four points – it was a four-legged stool of what we wanted to accomplish – to pass a fully inclusive hate crimes legislation… Another piece of our agenda was to promote marriage equality in our country. Legislatively, we couldn’t really succeed, but from the courts and the rest, and public opinion, of course, …that victory has been won.”

According to Obama/Pelosi/Reid Democrats, the second “leg” was the successful repeal of Don’t Ask, Don’t Tell which endorsed open homosexuality in the United States military. Pelosi confessed that “would not have happened without the president’s leadership and courage.”

The anti-Christian media played their part as well. The third leg of the perverse agenda was so-called marriage equality and the fourth leg was one that freedom-loving citizens better be paying attention to: the goal to pass ENDA (Employment Non-Discrimination Act).

Why does this matter?

Democrats held the press conference at the Capitol to further their radical agenda, announcing they have sent a letter to Robert Goodlatte, head of the House Judiciary Committee, urging him to set up a hearing for the Equality Act, or HR 3185.

Pelosi said ENDA was “a very important piece of the agenda” and since they are seeing such momentum and success in the advancing the LGBT goals, “we saw the opportunity to do something bigger.”

Do we really understand what they are saying here?

This so-called “Equality Act” would – believe it or not – amend the Civil Rights Act of 1964 to include “sexual orientation” and “gender identity” as protected classes! (The current law bans discrimination based color, race, religion, and sex.)

In his Washington Watch update, Tony Perkins of the Family Research Council called this Equality Act “the most radical piece of sexual orientation, gender identity legislation ever introduced,” and added:

Together with the media, the Left did quite a snow job on Americans on the issue of marriage. Over time, they managed to create this phony impression of support — even when the ballot boxes and state laws told a different story. Now that they’ve accomplished what they couldn’t do in the legislature in the courts, they’re owning up to the fact that they had to force the redefinition of marriage on the country illegitimately. While Americans are processing that bombshell, the Left is already moving on to the next target: a genderless America.

On a week in which over a million people already signed a protest of Target’s new transgender bathroom policy causing their stock to plummet, Tony Perkins warned that Christians and others who object to any of this liberal sexual or gender agenda would be severely punished! This would mean laws protecting religious liberty would cease to exist and the LGBT activists would have free reign.

We must raise awareness The Equality Act (sounds good, doesn’t it?) is political correctness on steroids. This November’s national elections will have major consequences as control of the Supreme Court is just one issue at stake. Many Christians, conservatives, and uninformed citizens fail to recognize the importance of protecting religious freedoms in America. We cannot afford another act of judicial terrorism on unsuspecting Americans by unelected justices.

I am not a conspiracy theorist, but what if this LGBT movement is part of a much larger agenda?

Back in 1963, the United States House of Representatives went on record and listed 45 Communist Goals that were being enacted across America. I first heard of these in a book, The Naked Communist, by Cleon Skousen. To some, this is old news but others may find some of these Communist goals extremely interesting:

11. Promote the U.N. as the only hope for mankind.

15. Capture one or both of the political parties in the United States.

32. Support any socialist movement to give centralized control over any part of the culture–education, social agencies, welfare programs, mental health clinics, etc.

40. Discredit the family as an institution. Encourage promiscuity and easy divorce.

You could probably put a check mark by each one of these and many more on the list, but as Christians, we are not surprised and should not lose heart because Jesus overcame the world and so can we.

It must be restated our struggle is not against flesh and blood, but against the devil and his minions out to wreak havoc on as many souls as possible. We must examine our own faith and repent if necessary, then cultivate and keep an eternal perspective every day! We must understand, combat and overcome these anti-Christian agendas, our tendency toward comfort and self, lukewarm churches, watered-down gospels, and the decay of biblical morality.

This world is flipping upside down and sin is openly promoted while too many Christians choose to look the other way. Will you answer the call to be a soldier of Christ, resist the agendas, and help expose the darkness? Will you encourage others to understand the times and recognize this foundational battle for truth in the face of moral relativism?

No matter what happens, the Lord is on His throne. He does not change and we have a secure hope that anchors our hearts and minds in Christ. We have assurance of eternal life in Heaven; our opposition does not. God’s Word is perfect, His promises are true, and if God is for us who can be against us?

7 Sure Signs America Has Declared War On Our Faith

It Could Never Happen in America

John Dewey and the NEA Agenda

Get ‘Em While They’re Young

When Tolerance is a One Way Street
What’s Happening To Our Heritage?

One Response to But They Said It Wasn’t An Agenda!