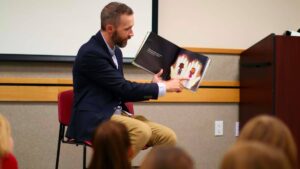 Christians often seem to be playing defense in efforts to respond to unbiblical, non-stop immoral agendas as forces of darkness work to promote wickedness throughout our culture. I’ve warned about many times about the anti-Christ spirit behind Drag Queen Story Hour and its spread across the country, so I’m delighted to report on two men that found a creative way to not only push back but play offense.

Pastors Dale Partridge (Prescott, AZ) and Michael Foster (Batavia, OH) have joined forces to create “Pastor Story Hour” which is their ground-breaking library project. The goal is to teach children a biblical worldview in children as opposed to pushing ideas that mock the God of creation.

Pastors, Christians, church leaders, conservatives, and concerned parents; take note and do likewise. This is a great idea! 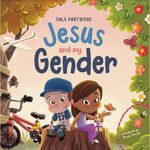 “I went down to the local library and I scheduled a time to do Pastor Story Hour,” Partridge said. “It happened to work out, because I just wrote a new book called, ‘Jesus and My Gender’ … a kid’s book that really amplified discussion.”

Likewise, Foster stepped up, understanding the need for strong community leaders. “Talk is cheap,” he said. “I got a room, set a date, and made a Facebook event. It was easy.”

What a novel idea. Use public libraries, funded by our tax dollars, to promote biblical, clean, truly family-friendly content. Can you imagine if Christians had been doing this for decades to present gospel opportunities as well as combat the growing hostility toward God in culture?

Partridge and Foster live in different states but connected over social media about joining arms — and Pastor Story Hour became a reality. They said their first effort was a great experience. These men are exhorting fellow believers to bring Pastor Story Hour to their local public libraries.

But this is key. What was one of the catalysts that led these men to embark on such an undertaking? Tough questions the church needs to answer. Partridge, who also heads up the digital ministry Relearn.org stated:

“Why are drag queens seemingly more interested in influencing the children in their community than pastors? Why are the lost more committed to the systematic and cultural evangelization of the public than American Christians are to evangelizing the gospel?”

Foster added that the problem today with fatherless homes as well as many dads failing to protect their kids, and appealed to men to be more vocal on these issues;

But isn’t there a lot of red tape and other opposition to use the public library for a “religious” event? It took just five minutes to go to the local library and fill out a form to request a room. A few days later, around 35 kids showed up to hear him read.

We can allow strange and disturbed men in women’s clothing to reach more children or we can try rallying the church to take action. That became the driving force behind Pastor Story Hour. Foster continues:

“It’s an opportunity for us to be out there and lead the way,” he said. “These corrupting influences are out there … because we’re not pushing back on it. This is a very simple way … to push back on evil in our day.”

This idea is one way to resist Satanic agendas and put Christians in the driver’s seat for once. Moreover, this is a good, modern-day example of storming the gates of Hell, a principle Jesus taught in the gospels. He said the gates of Hades shall not prevail against the church (Matthew 16:18).

Think about it. Gates don’t attack, they are defensive! Believers in Christ, the church, must be on offense.

These two men of God hope to do Pastor Story Hour monthly. Perhaps even more important is the goal to inspire other pastors and leaders around the U.S. to impact their communities this way. Getting biblical truth and the Gospel in front of children will encourage families. 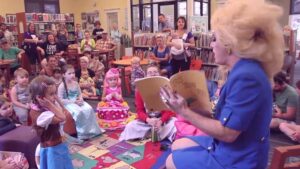 Foster and Partridge say their measures push back on the silence that has permeated the church around controversial issues of the day. Christians have been discouraged and bullied into not speaking up, but Partridge said, “Passivity is not working.”

The left and its minions have been very effective with the propaganda and demoralization campaigns through big tech/social media, Hollywood, the corporate world, ‘education’ system, the news, and more.

Let me put it this way: the godless are grinding down public morality and dragging children down with them. Lord have mercy!

Jesus sent his church on a mission to save souls and equipped believers with the Holy Spirit to get the work done. Paul wrote about the importance of prayer and putting on the full armor of God, using our offensive weapon, the sword of the Spirit which is the Word of God.

Silence hasn’t worked. Ignoring evil in society has not caused it to go away. The church has lost important battles and the country is teetering in many ways. Assuming we truly love our neighbors and believe in protecting children from evil, we have work to do. They need us to take biblical stands and speak up as often as necessary.

The enemy is evangelizing children and working to gain converts. Look at how successful they are at making disciples who reject Jesus and the Christian worldview. Having the God of the universe and the truth on our side, why shouldn’t we be working even harder to proclaim the good news of eternal salvation?