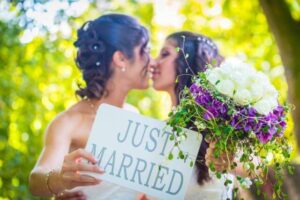 Because if you watch TV or listen to the (Left) mainstream media, Hollywood, Democrats, public schools, corporations, sports leagues, government, big tech and social media, the average person would think this country is overwhelmingly dominated by LGBTQ individuals and couples.

I saw a man on the street interview several years ago, and most people seemed to think between 20 and 40 percent of the entire population was gay. That’s effective marketing! That spoke volumes about who and what has been influencing the culture.

Tragically, it’s not the Christian church in America. We desperately need a moral and spiritual awakening or we will lose the culture completely.

We’re now at the point where we’re seeing the purposeful saturation of culture with all things LGBTQ. We have reached the non-stop promotion of what’s known as ‘queer all year.’

The reality is there are about 1.2 million same-sex couple households in the U.S. according to the recently released Census Bureau data. The country’s total population is over 332 million.

In addition to K-12 ‘education,’ one of the major change agents has been government. The home of most federal employees and politicians, the District of Columbia, exceeded all states for the highest percentage of same-sex couple households, 2.5%.

CNS News points out that though Washington D.C. leads the way, none of the 50 states had a number of same-sex couple households that accounted for more than 1.4 percent of their total. The average is under one percent!

It’s also interesting that “roughly 710,000 of the same-sex couple households were married and about 500,000 were unmarried.”

Wait a minute. Why aren’t the homosexual marriage numbers much, much higher? You know why. Because it was never about marriage. It was about rejecting God’s design. It’s about sex and special rights, not equality.

Moreover, in the build-up to the Supreme Court striking down all state bans on same-sex marriage in 2015, Americans were promised that’s all they wanted; it would end there.

For decades, the godless left has pushed the limits. They realized there was such a lack of resistance to the promotion and expression of sin, perversion, and the marketing of evil that they rapidly gained ground they never thought possible.

It’s been a gradual grinding down of morality over a hundred years as haters of God carried out Antonio Gramsci’s Marxist march through  the institutions.

In their arsenal of weapons, words have been most effective. Accusations and labels of hate, homophobia, intolerance, fascism, and even racism have somehow been used as a battering ram to silence into submission those who dare publicly oppose the agenda.

Few are now allowed to debate LGBTQ ideology or refute propaganda presented as fact. One would think those who believe in God and biblical values such as two genders, the traditional family, and natural marriage between one man and one woman are outnumbered. Again, not even remotely close.

And yet here we are.

The radical left has been lobbying, pridefully parading, infecting legislation and infringing on religious freedom, spreading its poison nationwide.

The Washington Stand’s Ben Johnson declares “one of the most pervasive lies insists that Americans support same-sex marriage by ever-increasing margins.” He refers to the lifestyles of those in gay relationships and notes by their own admission that the average gay couple begins having sex with other people within an average of 5-6 years.

“As decades of polls show, virtually all Americans do not respect marriages built on a foundation of perpetual, mutual adultery. (Why not simply remain single?) Indeed, nine out of 10 Americans still find any single instance of adultery “morally wrong.” Legislation compelling the American people to “respect” such marriages simply seeks to shut down opposition…”

He’s referring to the so-called “Respect for Marriage Act” which was passed by the Senate Tuesday. Attempts by conservatives to amend the new bill and protect religious freedom and rights of conscience were struck down. The Democrat’s new Act writes gay marriage into federal law and repeals key parts of the 1996 Defense of Marriage Act (DOMA) solidifying same-sex unions and repeals natural marriage protections.

Americans clearly do not support this – at least the majority of citizens – but today’s government is no longer about the people’s business. It’s about pushing an agenda. The minority with the loudest voices and their depraved Hollywood/big tech/media allies enforce mob-rule to gain power.

But they are truly tone deaf. For example, Hollywood completely bombed at the Box Office over Thanksgiving weekend, the lowest numbers since 1994!

Hollywood’s first LGBTQ romantic comedy, “Bro’s” tanked dramatically at the box office in October and its writer blamed homophobia for the film’s dismal numbers. Could it be Americans are getting tired of the gay and woke agendas being shoved in their faces?

“If I want to teach my children about sex and or sexual preferences at 7 and 8 I would do it in my home. I don’t need a Disney movie to help me out with it. STOP making everything sexual, it’s unbelievable.”

Another reviewer tweeted, “First Lightyear and now Strange World. Disney and Pixar releasing woke flops, one after the other. How many box office bombs before Disney learns?”

Just like Hollywood, Disney is not going to learn. The agenda is entrenched in its brand as well as the entire entertainment industry. Back in April, I reported on the fact Disney’s depravity and moral decline have been going on for many decades. Sadly, some folks are just now finding this out.

Parents have been warned. LGBTQ activists want to force their morality upon the entire population. They demand there be no restrictions on sexual behavior and one primary goal is to destroy marriage, the most sacred and foundational institution in human history.

The forces of darkness will never stop because evil never sleeps. It will be interesting to see what they do next. We just need to be reminded these are souls needing to be saved and not every one of them is an activist. They are however, ignorant of the judgment to come. They’re lost, they’re anti-Christ, they hold and promote the wrong worldview.

Pray for the protection of children and a revival of the American church.