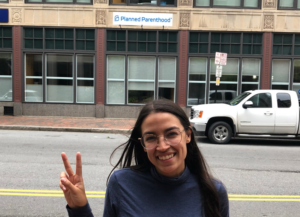 According to radical Democrat Socialist Congresswoman, Alexandria Ocasio Cortez, it’s better not to be born than to be alive if you’re poor. She sent out another tweet last week that we’re going to dissect.

Even sadder than her callous comments, many of her liberal followers chimed in and agreed with her twisted, eugenic views on Twitter. Remember, these people are allowed to vote. And they openly vote for pro-death candidates.

In the warped worldview and Marxist-driven ideology of AOC, one sees the world through the lens of class struggle, there are oppressors and those who are oppressed. She recently said that “forcing” women to give birth “against their will” is a “profound economic issue.”

Ah. There it is. Eugenics also rears its ugly head. We’ll get to that in a minute.

“Abortion rights are a class struggle too.

When the powerful force people to give birth against their will, they trap millions into cycles of economic setback and desperation. Especially in a country without guaranteed healthcare.

And desperate workers are far easier to exploit.”

First, there is no such thing as a “right to abortion” in the true meaning of the words “right” and “abortion.” In her world however, a pagan government gives you the right to murder those alive in the womb, and to decide which human lives should be allowed to be born.

If God gives us inalienable rights beginning with life, then why would it be permissible for man (or woman) to murder of a pre-born human being – or millions created in His image? Is it compassion to eliminate those who are seen as weak, unfit, or unable to be provided for?

The Bible teaches us to defend the weak and disadvantaged:

In all things I have shown you that by working hard in this way we must help the weak and remember the words of the Lord Jesus, how he himself said, ‘It is more blessed to give than to receive.’ ” Acts 20:35

Blessed is the one who considers the poor! In the day of trouble the Lord delivers him; Psalm 41:1

God is no respecter of persons. Killing the disadvantaged, less fortunate, or weeding out the weak is discriminatory, sinful and ungodly.

It is pre-meditated murder, not compassion.

Follow the science, the verifiable facts of life in a pregnant a mother’s womb. Follow the truth, and do not make abortion a ‘political’ issue.

If you follow AOC’s line of reasoning, if you can call it that, then there should be laws and penalties against ‘unapproved’ people having sex. At what income level do you draw the line against starting a family and having sexual intercourse, even in the context of marriage?

Planned Parenthood founder, Margaret Sanger once insisted married couples be required to obtain a license to have children. Quite China-esque, don’t you think?

This demonic ideology is part of the legacy of Sanger, who wanted to limit or even prevent black babies from being born. Selective breeding of fellow humans. Have you ever heard about the “Negro Project”? Look it up. It’s no mistake that today, approximately 79% of Planned Parenthood businesses are in minority neighborhoods.

Sanger, who would truly be called a “white supremacist” if she were alive today, laid the foundation for this liberal feminist social agenda that has left millions of post-abortive women in anguish, grief, pain, and regret after Planned Parenthood’s century in business.

Writing for Newsbusters, Jason Cohen reminds us that being poor in America is far better than having an average income in many other countries. He adds:

Per AOC’s logic, should poor countries stop having babies and abort all the unborn ones? According to the radical left, this would help mitigate climate change because it would fix the so-called overpopulation problem. So if they keep going in this genocidal direction, perhaps they will eventually be advocating for this.

Sounds like leftist elites playing god since they have rejected Him. The patience and mercy of the one true, living God will not last forever.

Young girls in classrooms today and young women in modern culture have been groomed to be rebellious, God-denying activists. They’ve been sold lies that sex without any restraints is freedom, and a baby is just a problem to be dealt with rather than a gift from God!

Like Margaret Sanger who regarded the weak as “feeble minded,” progressive elites such as Hillary Clinton, Nancy Pelosi, Michelle Obama, Elizabeth Warren, Stacy Abrams, and AOC, are openly rebelling against their Creator. And their followers have joined the death cult.

This whole subject should grieve us and we should not tolerate this evil.

How offensive it is that AOC seems to be implying for those below a certain income level or class status, their lives are simply not worth living. Is the only solution to murder more unborn babies? What ever happened to love your neighbor? How about (the church and) more fellow human beings helping these women and their babies?

Forget what you’ve been told, and reject the propaganda of the liberal media, Hollywood, academia, and Democrats (redundant, I realize). Believers in Christ, don’t be deceived by their rhetoric. Are you willing to be a voice for the voiceless?

As for the silent pulpits, encourage your pastors to take the lead and speak about this issue because it is literally a matter of life and death.

Thankfully, righteousness will ultimately prevail because the Bible is true and Jesus, who was Himself born in poverty, wins in the end.