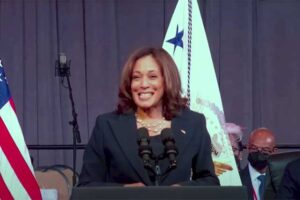 Nancy Pelosi recently said it was sinful to restrict abortion and called it unjust if a woman couldn’t do whatever she wanted with her body. They’re framing arguments by appealing to emotion while changing both language and meanings of words. Ironically, her comments came during a roundtable discussion on “reproductive health.”

To the left, it’s better not to reproduce, to prevent parenthood rather than protect a pre-born baby, carry out a pregnancy and allow a baby to be born.

The problem is that those who are ignorant of God’s Word and who bought the lies are falling for it. Vice President Kamala Harris spoke at the National Baptist Convention in Houston, Texas, last week and received plenty of applause. From Christians?

But it was quite a confusing speech – IF you pay attention to her actions and policies.

She denounced pro-life “extremists” working to outlaw abortion. We better understand what a divisive, secular progressive politician who openly opposes the biblical worldview is doing speaking at a Christian event. Harris told the crowd that for her and Joe Biden, “faith guides our work every day.”

Faith in what, exactly?

Don’t fall for it, friends. Kamala Harris supports more extreme, unbiblical policies than any other VP in American history. Sure, she uses Christian lingo, telling the audience to “fight for light over darkness,” even though she’s the one promoting deeds of darkness according to the Bible. Expose them! (Ephesians 5:11) The crowd applauded Harris when she claimed extremists “take away the freedom of women to make decisions about their own bodies.”

Baptist Convention. Confused? She also questioned the legitimacy of the Supreme Court in light of overturning Roe V. Wade.

Simply reading some of her words from the speech, many of us would agree. If we didn’t know it was from her speech, many of us would even say, “Amen.” However, she has proven herself to be hostile toward true Bible-believing Christians, and yet has been trying to portray her and Biden’s views on socialism, transgenderism, and abortion as Christian by telling people she went to church as a child. So?

The media is doing the same thing. Are people that easily confused?

“As a Southern Baptist, I grew up reading the Bible — maybe a backslidden Baptist, but I still know the Bible. Jesus never once talked about abortion, never once! …Never once mentioned it, and for people perverting the gospel of Jesus Christ down to one issue, it’s heresy.”

So according to theologians in the godless media and in the totalitarian Biden administration, if we quote Scriptures that support human life in mother’s wombs, we are perverting the gospel? Calling evil good.

They likely don’t know what the gospel of Jesus Christ even is.

Jesus said if we love Him we will keep the commandments. One of those commandments is not to murder. We are to value every life made in the image of God. Also, Jesus, Himself is the Word who became flesh. The New Testament affirms the Old Testament and the Bible is one cohesive story of redemption through the sacrifice of Jesus Christ for our sins.

While it is true that Christ fulfilled the law, He said He did not come to abolish it, and the New Testament is clear that believers should obey God’s moral law.

God spoke through Jeremiah saying, “Before I formed you in the womb I knew you (Jeremiah 1:5),” and the Bible says He formed us in our mother’s wombs (Psalm 139:13). Not only that, God knows the number of our days before we are even born (Psalm 139:16)!

Here’s another thing, Joe and Kamala. The Bible calls child sacrifice an abomination. Democrats may call it a “choice” or about “women’s health,” but to the Lord God it is murder.

“And they built the high places of Baal which are in the Valley of the Son of Hinnom, to cause their sons and their daughters to pass through the fire to Molech, which I did not command them, nor did it come into My mind that they should do this abomination, to cause Judah to sin.’

You shall not give any of your children to offer them to Molech, nor shall you profane the name of your God; I am the Lord.

Who was Molech? Molech (or Moloch) was a pagan deity who was worshipped in sexual rituals as well as by “passing children through the fire.” These idols of Moloch were giant metal statues of a man with a bull’s head. Some of these had holes in the abdomen.

A fire was lit in or around the statue and infants were placed in the statue’s arms or in the hole. When parents sacrificed their firstborn, they believed Molech would ensure financial prosperity for the family and future children.

What’s the difference between a preborn baby and a firstborn baby? Location; just a few inches. Human life is not defined by size, level of development, environment (location), or degree of dependency! [S.L.E.D.]

Some have responded and refuted the lie Kamala Harris is pedaling to a biblically illiterate American people saying things like “one does not have to abandon their faith or deeply held religious beliefs” to defend abortion. Okay, one  may not have to “abandon” your faith to endorse abortion, you just have to contradict or ignore it.

When He says “thou shalt not kill” is that a suggestion that we should follow if we feel like it, but disregard if we don’t like the suggestion?

I also agree with Dungy saying he had a problem with Harris’s comments being made in a “church environment.”

One fan said to “leave your religion out of my government,” but it was a government official, Harris, who brought up abortion as part of her fake religion.

As for her boss, Joe Biden supports abortion medication, even sent to people’s homes. Murder by mail. This is called finding new ways to do evil.

The lust-for-death Democrats also support the removal of all abortion restrictions as well as taxpayer funding the murder of pre-born babies – both of which go against the approval of a majority of citizens according to polls. And in case you’re interested in knowing where some of our tax dollars go, Planned Parenthood received $633 million dollars in U.S. taxpayer funding and committed 383,460 abortions in 2021 alone.

I’ve warned about Kamala Harris before in much detail. She has been redefining radical for years, similar to leftist progressives and social justice apostates who have redefined love, truth, gender, and the gospel. (See 1 Corinthians 15:3-7, Ephesians 2:8-9).

Many have been deceived so watch out for deceivers and test the spirits to see if they are in Christ or if they are anti-Christ. The Bible instructs true, born-again Christians, “do not believe every spirit,” and 1 John 4:5 warns about the spirit of error and false teachers, saying:

Don’t listen to them and by all means, don’t fall for the lies, propaganda, and government-approved talking points no matter how many compassionate, convincing, or flowery their words sound! Contrary to the Marxists, humanists, media sycophants, leftist politicians, and  O’Biden progressives in power, they in fact are the ones who are a threat to the soul of America. Not the rest of us.

They will continue their ‘divide and conquer’ diversion, but we must resist and unite with those who align with true biblical values and worldview. Pray, press on, and after having done all, stand firm.

55 Years Later: Paul Harvey Was Right!
Alfred Kinsey — A Pioneer Of Perversion Who Paved The Way For Today’s Sex ‘Education’