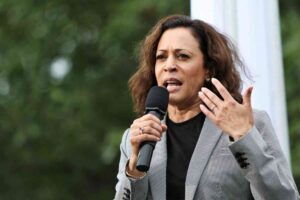 Kamala Harris, the woman that, if Joe Biden becomes president, would be a heartbeat away from the most powerful position in the free world. Who is she? Harris is one of the most liberal senators in the U.S. – and in 2020, that’s saying something! She proudly supports abortion on demand – through birth, and not only that, she wants to force taxpayers to fund the slaughter of pre-born babies.

She has redefined “radical.” And so has the Democrat Party, in case you hadn’t noticed!

Last year, she touted Medicare for All. Harris plans on forcing taxpayers to fund transgender surgeries, but she’s really a political chameleon; an opportunist willing to do and say whatever will help her gain power. Don’t be fooled by some of the Democrat media saying she’s a moderate. Harris may be even more progressive than Bernie Sanders.

Kamala Harris is just one election away from becoming president, I mean, vice president.

She was raised Hindu and her husband is Jewish. Her mother, Shyamala, is from India; her father, from Jamaica; they met as graduate students at, drum roll, the far left University of California, Berkeley. The name, Kamala, means “lotus” in Sanskrit, and is another name for the Hindu goddess of wealth and prosperity known as Lakshmi.

It’s common knowledge that Kamala Harris began her career in an adulterous affair with former San Francisco Mayor, Willie Brown, who then appointed her to at least one position in government. Brown was 60 years old and Harris was just 29 at the time.

So Kamala Harris, the strong, outspoken feminist candidate talking about the ‘year of the woman’ had a little help early in her career. Interesting.

Many faith leaders are speaking out in the hopes of informing voters that the 2020 Democrat ticket of Biden/Harris is the most pro-abortion presidential campaign in history.

President of Samaritan’s Purse, Evangelist Franklin Graham said as a follower of Jesus Christ, he is pro-life and believes every life is precious to God, and that the extreme abortion-on demand ticket of Biden/Harris should be a great concern to all Christians.

“Democrat extremism doesn’t end with abortion. In this election, voters will choose between a free market or socialism; prosperity or a ruined economy; a secure nation or open borders; the Constitution or judicial tyranny.”

Kamala Harris has even gone so far as to compare ICE to the KKK, and seems to be unapologetically catering to her hard left, anti-Christian base. She supports the Green New Deal and mandatory gun buy-backs. It almost makes sense that Biden picked her as a running mate at this time in political history.

During a Democrat debate last year, Harris responded to a question saying that as president, she would use the Justice Department to strike down state pro-life laws. That means she would abolish laws that were enacted by legislators – who were duly elected by the people.

When she announced her run for president, journalist, David Daleiden of the Center for Medical Progress (CMP) tweeted :

It’s a bad joke for @KamalaHarris to say she’s running for “truth, justice, decency, equality, freedom, democracy” when she weaponized the powers of law enforcement to attack my 1st Amendment civil rights as a citizen journalist at the bidding of her @PPact donors and backers.

In 2016, as CA Attorney General, Kamala Harris personally met with executives from Planned Parenthood and ordered a search warrant to steal David Daleiden’s videos and documents. CA law protects citizen journalists, but the heavily-armed raid was carried out anyway – at his home at six in the morning.

The lead investigator under Harris at the time testified that he did not examine the evidence, but simply did what he was instructed to do by the AG’s office. And here’s your takeaway: Harris launched an investigation – not into the trafficking of aborted baby body parts which is a federal crime– but into the citizen journalists who exposed the corruption!

Harris has received over $81,000 from Planned Parenthood so far, and the abortion giant is spending $45 million dollars to help elect Democrats in November. It’s astounding they still receive federal funding.

If it wasn’t bad enough that Kamala Harris was a ringleader in the character assassination attempt of Justice Bret Kavanagh, she also believes that Catholics and Christians are unfit to serve in our nation’s courts. In 2018, Harris attacked a district court nominee from Nebraska, Brian Buescher, about his membership in the Knights of Columbus, which has been an important charity in the U.S. for more than a century.

In one of her questions to him at the time, Harris stated:

Harris kept pressing him, criticizing biblical teachings on basic moral issues and asked  Buescher whether he was aware that they also opposed “marriage equality,” – same sex “marriage” – when he joined the organization.

Harris also co-sponsored the so-called “Equality Act” to score points with Nancy Pelosi. For one thing, that horrible bill would force public schools to allow transgender athletes to play the sport of their preferred gender. Translation: biological boys who identify as girls would compete on girls’ teams and be free to use their locker rooms.

In Connecticut for example, two boys have already won 15 track state titles. Is this fair?

Next, Kamala Harris said in an interview last year she would legalize prostitution as long as it was consensual. How does this protect women and young girls who are afraid to speak up against their abusers? Wow.

Having no problem discriminating against Christian businesses, Harris filed a brief with the U.S. Supreme Court asking it to refuse Hobby Lobby’s request to deny women coverage for contraception because of the store owner’s religious beliefs. In the landmark decision, the Court ruled that family-owned corporations can’t be forced to pay for insurance coverage for contraception under the Affordable Care Act if it offends their religious beliefs.

Even the liberal Associated Press reported Harris was silent on the Catholic Church sexual abuse scandal when she was San Francisco DA and California Attorney General. Why? She received tens of thousands of dollars in campaign donations from PR firms linked to the Jesuit order of the Catholic Church in San Francisco. Harris then sealed records of sex abuse victims and refused to investigate pedophile priests.

One victim ignored by Harris was Joey Piscitelli. He said she never responded to him when he wrote to tell her a priest who had molested him was still in ministry at a local Catholic cathedral. Other survivors abused by Catholic priests say Harris resisted requests to help them with their cases and she refused to release church records on abusive priests.

Ironically, when running for president she often tried using the gospel parable of the good Samaritan. She endorses social justice activism and said she hopes America will overcome injustices, but every time you put a word in front of ‘justice,’ you’re probably talking about something else.

Last year at a Democrat fundraiser she stated:

Justice for children – from a woman who has no regard for life in the womb.

In 2015, you may remember Mexican national, deported felon Jose Inez Garcia Zarate, shot and killed Kate Steinle on a San Francisco pier. What did CA Attorney General Kamala Harris do? She defended the sanctuary city policy.

Then, Syed Farook and Tashfeen Malik killed 14 people and wounded 22 in San Bernardino, CA. A year later, Harris finally issued a statement on what she called a “devastating and tragic terrorist attack,” but failed to name the Islamic terrorists and their motive for the mass murder.

Kamala Harris has yet to denounce the violence and rioting in many American cities, the more than two dozen deaths now since the Floyd murder in Minneapolis, and the mob intimidation carried out by the protest arm of the Democrat Party.

Harris recently referred to November’s election as “a moment of real consequence for America.” I agree, because we all know elections have consequences. Harris stated:

“The president’s mismanagement of the pandemic has plunged us into the worst economic crisis since the Great Depression, and we’re experiencing a moral reckoning with racism and systemic injustice that has brought a new coalition of conscience to the streets of our country, demanding change,”

The contrast is incredibly clear in November: law and order or lawlessness; religious freedom or discrimination against Christians and churches, support of righteousness or endorsing godlessness, support Israel or oppose our great ally; tax cuts or high taxation and regulation.

She now considers herself a “Black Baptist,” and in past speeches, Harris has invoked liberation theology, which emphasizes social concern and political activism to liberate oppressed people. It’s Marxist in nature in assuming oppressed people and oppressors.

Black liberation theology focuses on the plight of poor, African-Americans in particular being liberated from social, political, economic, or religious bondage and injustice, whether real or perceived.” It is the belief that black humanity are victims of white supremacy and must be freed. It is a highly selective interpretation of the Gospels in an attempt to co-opt Christianity to promote a form of Marxism.

Democrat deconstructionists are dismantling America’s heritage and contaminating our culture in order to keep on radically transforming this republic under God. Don’t let them! We have a say. Vote. Pray. Share this, and trust the sovereign Lord with the results! Only you can prevent soul pollution, communism, Marxism, Democrat socialism, and the destruction of America.

Time to Unplug? Screen Time is Taking a Toll
Those Racist Republicans?