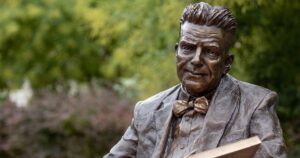 Indiana University recently put up a life-size bronze statue of radical sex-researcher, Alfred Kinsey to celebrate the 75th anniversary of the Kinsey Institute at the college. The flawed theory of childhood sexuality based on his unmonitored, unscientific research paved the way for today’s sex education taught in public schools. [graphic content warning]

If you’re unfamiliar with Alfred Kinsey or you’ve only heard the Hollywood version, some of the buried truth is that Kinsey and his associates performed their sex “research” on hundreds of children and infants, prostitutes, and sex-offenders.

Even a former director of the Kinsey Institute confessed that all of Kinsey’s data concerning children and adolescents came from a single pedophile who kept a diary of his experiences with 317 pre-adolescent boys. John Bancroft said that one individual man had “incredible numbers of sexual experiences on which he kept very careful notes.”

We’ll get to that in a minute.

Kinsey’s promotion of sexual activity at any age laid the groundwork in the 1940s for the normalization of adultery, homosexuality, and transgender movement today, and could logically lead to destigmatizing pedophilia. People need to understand the facts and history about Kinsey that have been downplayed, denied, or whitewashed.

In his attempt to measure the range of human sexuality, Alfred Kinsey included two alarming tables documenting pre-adolescent experiments in his 1948 book, Sexual Behavior in the Human Male. Kinsey wrote that his findings were “an important substantiation of the Freudian view of sexuality as a component that is present in the human animal from earliest infancy.”

Human beings aren’t much different than animals according to his warped worldview. Kinsey reportedly stated:

“The only unnatural sex act is that which you cannot perform.”

According to author, researcher, historian, and educator Dr. Judith Reisman (1935-2021), Kinsey said his mission was to remove the Christian influence in America and eliminate the sexually “repressive” legacy of Judeo Christianity.

In her exhaustive study of Alfred Kinsey, Dr. Reisman went on to conclude:

“In large measure, Dr. Kinsey’s mission has been accomplished, mostly posthumously, by his legion of true believers – elitists who have systematically brainwashed their fellow intellectual elites to adopt Kinsey’s pan-sexual secular worldview and jettison the Judeo Christian worldview upon which this country was founded and flourished.”

Americans have generally been uninformed about several key individuals who have proven to be both influential and detrimental to our culture and the family.

Around the same time Planned Parenthood founder and eugenicist, Margaret Sanger was advancing her immoral and racist abortion movement, and Humanist John Dewey was pushing his anti-Christian, socialist agenda in government schools, evil was unleashed on a level previously unseen in the U.S.

Zoologist and sexologist, Alfred Kinsey is referred to by some as the Father of the “Sexual Revolution” in America. He likely inspired Playboy’s Hugh Heffner as well as the open “free love” sexual rebellion of the 1960s. Others refer to Kinsey as the most influential bisexual pedophile and child molester in this nation’s history.

The University of Indiana has unveiled a statue honoring Alfred Kinsey. Kinsey was a degenerate pedophile lunatic who conducted “research” on the orgasms of children and babies. One of the most prolific groomers of the 20th century. No wonder the Left honors him.

Kinsey’s research was funded in part by the Rockefeller Foundation, which also funded Margaret Sanger’s birth control efforts as well as population control ideas today. In fact, Dr. Herrmann Muller, one of Kinsey’s colleagues at Indiana University was actually a member of the American Eugenics Society.

One goal of Kinsey’s research was to prove that humans are sexual beings, and the earlier in life we start to experience sexual pleasure, the better. Kinsey fed his perverted sex drive by selling his theory that there was “widespread ignorance of sexual structure and physiology.”

Kinsey also believed the unbiblical idea that waiting to have sex, especially until getting married, was psychologically harmful. Early on, Kinsey reportedly conducted his research in the attic of his Bloomington, Indiana home. He truly inspired the future trend of pornography that has since destroyed countless lives, marriages, and families.

But that’s not how liberal Democrat elites see his sex work.

When Hollywood released Kinsey, starring Liam Neisen, writer and columnist Selwyn Duke published “The re-whitewashing of pedophile Alfred Kinsey.” He said the movie portrayed Kinsey, not as the criminal he was but merely as a “conscientious but persecuted scientist whose only ambition was to push back the frontiers of ignorance.”

The film completely glossed over Kinsey’s perversion and damage he caused to America. In real life, he padded and skewed many of his sex survey results. Duke blasted those who conceal the truth about Kinsey being complicit in crimes against humanity:

“It is absolutely unconscionable that useful idiots, perverts and social-engineers would perpetuate one of the most pernicious lies ever foisted on the American public. To create any kind of work about the life of Alfred Kinsey and not place his deviance, criminality and wickedness front and center is akin to making a movie about Hitler and omitting mention of the Holocaust.”

Defended and honored by the Left, Kinsey flew under the radar for decades and yet, he may be one of the most prolific groomers of the 20th century who somehow deceived people into thinking his research was scientific. 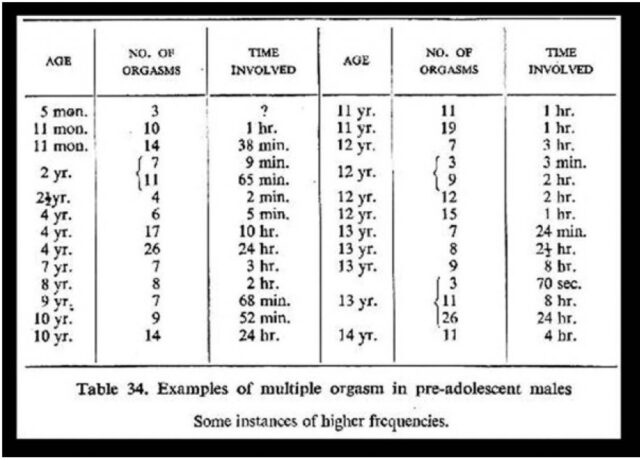 But what is known as “Table 34” in Kinsey’s aforementioned book, along with his 1953 book, “Sexual Behavior in the Human Female” contains disturbing documentation of children’s orgasms and have drawn concerns of child abuse. How was the data collected? Notations indicated the use of a stop watch to record the orgasms of child subjects.

The evidence suggests Kinsey’s so-called “scientific research” was in fact child molestation. Harsh accusation? What young child in the 1940s or anytime would have given consent to such invasive and shocking experiments? Perhaps just as bad, what parents in their right mind would have allowed this to be done to their child?

This is criminal sexual abuse of minors. Kinsey’s perverse work seems to have revealed more about adults and the depravity of the human heart. (‘The Children of Table 34’ video)

Research scientist, Gordon Muir emphasizes that what is taught in academia today is based on Kinsey’s theory of childhood sexuality and development based on the extremely controversial tables mentioned here. He said it is astonishing people use Kinsey “as the basis of what we understand to be normal childhood sexual development.”

It’s also hard not to connect Kinsey’s influence with sexual abuse of children by Catholic priests, covered-up for decades. In a 900 page report in 2018, a PA grand jury alleged over 300 priests abused more than one thousand children in that state alone. In most cases, predators guilty of criminal conduct were never brought to justice. Studies have shown 85% of the victims were boys. This led to a Roman Catholic Church representative to admit they have “a very grave problem of a homosexual culture in the church.”

Sadly, many girls were abused as well. Stories out of Pittsburgh in particular are horrific. Children were raped in places of worship, in schools, and according to the report, other children were groomed for sex through programs and retreats. This is some fruit of wicked human hearts and years of sugar-coating sexual activity outside of God-ordained marriage.

Dr. Judith Reisman declared that if the general public learned the actual truth about Kinsey, “the sexperts in the field of human sexuality and the sex industry will be shaken to its foundations,” and entire shelves of books in libraries and schools would have to be removed or rewritten. Sex Ed courses thrown out, and “lucrative public grants will dry up.” 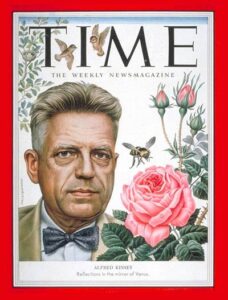 In part of the description to her 1990 book, Kinsey Sex and Fraud: the Indoctrination of a People, Reisman explained his surveys were done on (a non-representative group) hundreds of sex offenders, prostitutes, prison inmates, and exhibitionists.

“Because of this fraudulent research, Kinsey’s brand of social ‘science’ has led to one of the greatest hypocrisies of all time: the pretense of providing safe-sex instructions to children while in reality advancing Kinsey’s agenda, including indulgence in high-risk lifestyles and behaviors.”

Think about what teenagers and very young children are being taught today in schools under the guise of “health” or sex “education.” Depending on what side of the worldview aisle you’re on, you can either blame or thank Alfred Kinsey for our modern hyper-sexualized culture.

He was truly a pioneer of perversion, the man who regarded humans as animals, yet is well respected today in colleges, universities, media, and by the left in general. After all these years, they even gave him a statue proving the truth has not changed people’s minds.

Understand that tragically, there may be no bigger and more damaging influence in America on sexual promiscuity, expression, and experimentation than Alfred Kinsey.