If you claim to represent God, but refuse to live by His moral laws, please leave the church and stop lying to everyone! Enough. This story is both heartbreaking and disturbing, but darkness must be exposed, and wicked men must finally be held accountable. Those who commit or condone evil have again given Jesus a black eye.

Tragically, the Roman Catholic Church has known all about it: decades of sexual abuse and yet, they covered-up extensive abuse by its leaders – abuse that has robbed children of their innocence, further tarnished the church’s image, and destroyed countless thousands of lives. This is a gut-wrenching and sickening story.

Our purpose as Christians is to know and obey God, to make disciples and make Him known by preaching the gospel, and to be light in the world – essentially to transform culture. The Catholic Church however, has again cast a thick, dark veil over the cross of Christ and the truth of His resurrection.

In a report 900 pages long, a grand jury in Pennsylvania alleges over 300 priests abused more than one thousand children. Predators guilty of criminal conduct were never brought to justice even in some cases going back seventy years. Many priests have died, others retired, but none will escape the justice of a holy God whom they have mocked. 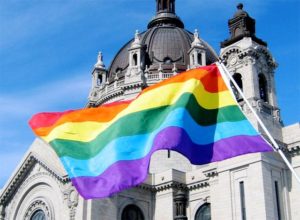 Studies have shown approximately 85% of the victims were boys. In fact, Cardinal Raymond Burke, a member of the highest court at the Vatican, stated:

“We have a very grave problem of a homosexual culture in the church.”

Sadly, many girls were abused as well. Stories out of Pittsburgh in particular are horrific. Children were raped in places of worship, in schools, and according to the report, other children were groomed for sex through programs and retreats within the diocese.

A statement from the Vatican reads:

“There are two words that can express the feelings faced with these horrible crimes: shame and sorrow.” …The abuses described in the report are criminal and morally reprehensible,” the statement read. “Those acts were betrayals of trust that robbed survivors of their dignity and their faith.”

Shame on who? It’s bewildering the same story continues repeating itself within this powerful church. Sixteen years ago after one of many Roman Catholic Church scandals, Pope John Paul II said:

“The abuse of the young is a grave symptom of a crisis affecting not only the church but society as a whole.”

Where is the accountability? You may remember the 2015 movie “Spotlight” took home the best picture Oscar for its drama about the Boston Globe investigation of the Roman Catholic Church covering up sexual abuse by multiple clergy.

To be sure, abuse occurs worldwide by all kinds of people because the heart of man is sick (Jeremiah 17:9). But evil is even more horrific when committed by those in positions of authority who should know better.

The Catholic Church has added to centuries of rules and traditions set up by men, things that are not required by Scripture; that conversation is for another time. But hypocrisy and legalism of religious leaders is nothing new. Jesus confronted them in Jerusalem.

“And He said to them, “Rightly did Isaiah prophesy of you hypocrites, as it is written: ‘This people honors me with their lips, but their heart is far from me; in vain do they worship me, teaching as doctrines the precepts of men.’ Neglecting the commandment of God, you hold to the tradition of men.” Mark 7:6-8

According to the new grand jury report out of PA, the “real number” of children abused by priests could be “in the thousands” due to missing records, or other victims who feared coming forward and speaking about the allegations. Some senior church officials, including the current archbishop of Washington, D.C., systematically covered up the abuse.

The report listed what earlier church investigations around the country also did, describing widespread sexual abuse while Catholic leadership concealed the truth. One priest abused five sisters. Another impregnated a minor, and then helped pay for the abortion. Another priest assaulted at least a dozen boys, and the list goes on.

In the Gospel of Luke, Jesus said:

“It is inevitable that stumbling blocks come, but woe to him through whom they come! It would be better for him if a millstone were hung around his neck and he were thrown into the sea, than that he would cause one of these little ones to stumble. Luke 17:1-2

When will the Vatican and church leadership do the necessary housecleaning? Another sad consequence of this sin epidemic is the countless victims who no longer trust, not only a tainted church, but the God who is being misrepresented.

Hypocrites and deceivers must be rooted out of the church. Just thirty years after the resurrection of Jesus, the apostle Jude was compelled to warn believers to contend for the faith. He listed a few traits of apostates such as: ungodly, morally perverted, self-destructive, self-seeking, and worldly minded to name a few.

Author and evangelist, Ray Comfort said one reason the Catholic Church is filled with homosexuals and pedophiles who molest little boys is because they deny the need to repent and be born again. Being baptized as an infant doesn’t cut it. Comfort states:

Another contributing factor is that the Roman Catholic Church denies the biblical revelation of the sinful nature of mankind; they claim that even atheists don’t need God’s forgiveness—that they will make it to Heaven without the new birth.

One thing we can do is to share this story, as disturbing as it is, and pray for God’s comfort and healing for the victims, most of whom haven’t had justice for their entire lives. Catholic Bishops have acknowledged more than 17,000 people nationwide have reported being molested by priests and others in the church going back to 1950.

Decade after decade, priests, bishops, and high-level leaders tried to shield the church from bad publicity and financial liability. They failed to report accused clergy to police, used confidentiality agreements to silence victims, and sent abusive priests to so-called “treatment facilities,” which later “permitted hundreds of known offenders to return to ministry,” the report said.

Where’s the outcry over this?

To abuse children—and then to cover up the abuse of children—while acting as a representative of Christ, is a sin that puts all of us in remembrance of the reality of Hell. …It’s a sin that will cost us all—Catholic and evangelical alike—credibility in this culture we can’t afford to lose. 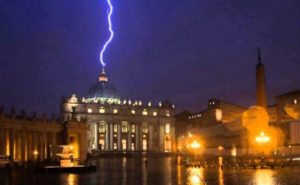 There is a righteous God that will judge the living and the dead. Yes, He is loving, forgiving, and patient, but He is also holding back His wrath. And one day God will unleash His justice and vengeance. The Bible refers to this part of His character as a “consuming fire.”

Church leader, priest, or lay person, every one of us will stand before God. And unrepentant sinners will be held accountable. Come out from among them!

Make sure you are born again into a living hope, and are following the true gospel of salvation by grace alone through faith in Christ alone. Then, make sure you are living a life set apart for Jesus.

Are you seeking the approval of God or man? Yes, it does matter. Stop conforming to this world!

“…it is time for judgment to begin with the household of God; and if it begins with us first, what will be the outcome for those who do not obey the gospel of God?  1 Peter 4:17

JUDE: Defend the Faith, Warn the Church about Ungodliness Within

Cardinal Burke: ‘We Have a Very Grave Problem of a Homosexual Culture in the Church’

The Devil Resides at the Vatican