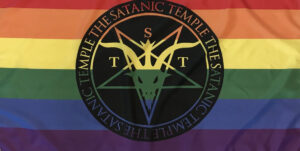 The Satanic Temple (TST) Idaho, originally a sponsor of a Pride Month event last weekend withdrew from the event at the last minute after a few other sponsors dropped out du to their involvement. A local news outlet first reported on the temple’s intention to offer renunciations of Christian baptisms at the “family-friendly” gay-pride event.

A TST spokesperson said they pulled out because of ‘spineless, opportunistic corporations.’ Apparently, corporate sponsors are fin with homosexuality, sexual immorality, and the denial of God as Creator of mankind, marriage, and family. But they draw the line at the sin of occultism and Satan-worship.

What’s ironic is according to the Satanic Temple, more than half of its membership is LGBTQ. Think about that.

Their plan was to hold so-called “unbaptisms” for those wanting to renounce their faith and shake their proverbial fist at God. But nonetheless, “Pride in the Park on Saturday was held at the Coeur d’Alene City Park and Bandshell.

Let’s take a closer look at some of the radical activists groups behind this extravaganza. According to local KBOI, along with The Satanic Temple, also involved with the event was the ACLU of Idaho, Everytown for Gun Safety, Citizens’ Climate Lobby, Ecumenical Catholic Communion Church, Idaho State Police District 1, and a local public library.

As mentioned, a highlight of the fest was the opportunity for LGBTQ allies and Idaho Satan worshippers to publicly renounce their faith in the true, living God. They call it “unbaptism.” Prior to the event, TST posted this now-deleted rant on Facebook.

“We are so excited to announce that we will have a booth and be participating Coeur D’Alene’s ‘Pride in the Park’ event… June 11th from 10am-3pm!” “We will have merchandise for sale, be offering support to our community and performing unbaptisms for those interested! Just know, Satan loves you for you! Hail Satan!”

But what about baptism and can it be undone?

In God’s Word, new believers are encouraged to be baptized by being submerged in water which (Matthew 28:19, Mark 16:16, Acts 8:36-37, Colossians 2:12, 1 Peter 3:21) symbolizes the death, burial, and resurrection of Jesus Christ. Baptism after conversion represents the washing away of sin that comes by placing faith in Jesus and most importantly, identifying with Him.

The act or sacrament of baptism also publicly acknowledges the individual’s complete trust in Jesus, confession of that faith, repentance from sin, belief in future resurrection, and in some cases signifies the addition of the believer to a local church.

“Unbaptism” is defined as a ceremony or ritual performed to undo a baptism.

The Satanic Temple in Austin, TX held an “unbaptism” ritual in 2019, promoting it as “an opportunity for religious liberation and self-worship.” Making yourself out to be a god.

Some of the worst advice you could receive in life is to be true to yourself, please yourself, worship yourself, and ‘follow your heart.’ Sounds eerily similar to ‘Do what thou wilt.’

This satanic mantra was created by the early-1900s occultist, Aleister Crowley, who was arguably one of the most evil men who lived in the 20th century. As the world turns to self-centered lawlessness, it’s no shock that satanic chaos reigns supreme as mobs destroy America.

The Bible teaches that the heart of mankind is sick and beyond cure (Jer. 17:9) apart from Christ. And in John’s Gospel, Jesus states:

“Join us in casting aside the shackles of religious tyranny and embracing the self,”

Religious tyranny. Got it. Serving Jesus is oppressive to those ignorant of true freedom.

Regarding those who take part in Pride events – and all they represent – some are deceived while others are purposeful deceivers.

Parents, are you listening? They want to recruit your kids and are gearing these events toward children. Do you know what happens at some of these drag dance parties? Moms, dads, and their young children cheer immorality and even stuff dollar-bills in the G-strings of perverted men (scantily dressed as raunchy women).

If you haven’t been paying attention, these shows are often sinister and highly sexual in nature. Most Christians would consider them completely inappropriate for children. So why have LGBTQ activists have been virtually unhindered, openly performing these shows in government schools, small town libraries, and sadly, even some so-called ‘churches’ of apostate denominations?

One thing we’ve been seeing is too many parents are finding out after the fact. News about a “family-friendly drag show” or similar event for students had already taken place and low and behold, someone failed to inform parents in advance.

If you’re sick of the promotion of pride and perversion, you’re in good company as most Americans are tuning it out according to recent polling. People see this for what it is: an attack on God, on children, on the Christian church, on family, purity and goodness, and on the truth itself.

So then, what changed? The Bible says the Lord never changes. Jesus, the Truth, is the same yesterday, today, and forever (Heb. 13:8).

Believers in Christ are to trust God in all things. Those pursuing righteousness will live by faith and because the Lord is returning, we need to persevere “so that when you have done the will of God, you will receive what he has promised (Heb. 10:36-38).”

There is nothing new under the sun. The difference in today’s culture is far too many people just turn the other way, do nothing, and say nothing. Silence in the face of evil is itself evil. If we love others we will tell them the truth, whether it’s the gospel or confronting the evil that holds people captive.

May you and I not be counted among those who are accommodating sin, ignorant, or complicit.