On May 21st, United Church of Christ (UCC) in Naples, Florida hosted a “Youth Pride Conference,” a free event for kids as young as 12 and featured a “drag show.” Several things are very wrong here.

First, in these days of blatant apostasy, we now must clarify and define what a “church” is and what it means to be Christian. It is well known to discerning Bible-believers and true Christ-followers the UCC left the reservation of sound doctrine decades ago. Second, the LGBTQ church event was initially going to use local Middle Schools as pickup points to bus kids to the conference. Third, Scripture as well world history teach the evils of “pride” and in fact, it is one of the sins God hates. 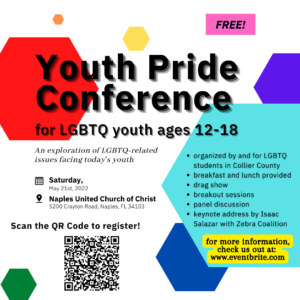 Attendees were asked to register and enter their pronouns, the name of their school, and then enjoy free shuttle transportation at Immokalee and Golden Gate Middle Schools. Wait, what?

So prior to the event, Florida’s Voice reached out to Collier County Schools on why transportation from school property was provided to an LGBTQ drag show. They said,

“The District was never informed nor contacted about this event. CCPS [Collier County Public Schools] is not a sponsor of the event, which is being held at a private facility. CCPS also neither authorized nor approved the transportation of CCPS students to and from district school sites by the event organizers. Any inference to the contrary is fully rejected by CCPS,”

But let’s address the even more disturbing issue here: the “church” that hosted and blesses perversion under the guise of ‘social justice.’

Naples UCC is led by Rev. Dawson Taylor. Their website says Dawson became Senior Minister in 2016 and holds a B.A. in Political Science. Please show me in the Bible the book, chapter, and verse that say one of the requirements to lead, teach, and shepherd God’s flock is to have a degree in politics and secular government.

Remember, we’ve established over the years we cannot say every group with the label of “church” is in reality a Bible-believing, Jesus-preaching fellowship of believers. And just because a man has a title of pastor, reverend, or minister doesn’t mean they are serving under the traditional roles and requirements outlined in the Bible.

Counterfeits must be exposed and warned to repent and step down. These days, you just need to be a progressive, liberal, socialist, or a friend of the world in order to be a leader in some of these so-called churches. A biblical education, accountability, and proper application of Scripture are often not even necessary for today’s post-modern denominations.

Case in point: the good “reverend” Dawson tried hosting a gay prom at the church last month – for children! He also describes himself as being a proud “progressive.” In his Twitter BIO which has since been removed, he boasted “#BLM” in support of the Marxist-driven, anti-Christian activist organization that spreads hate, victimology, and racial division.

It’s also not a shocker that Dawson stands with big abortion business, Planned Parenthood. A few months ago, he tweeted this:

We are all Ukraine. We are all Transgender young people. We are all women who need access to healthcare without government interference. Let us pray especially for those oppressed by bullies with power.

I’m just wondering who or what god he is praying to. It’s no wonder the latest Barna research I reported on last week found 62% of pastors lack a biblical worldview. More tragically, only 12% of youth pastors and children’s leaders have a biblical worldview. What does that say for our future regarding spirituality and faith in America?

Churches today justify twisted theology under the guise of popular, redefined code words and language: compassion, diversity, inclusion, “love,” progressive, and this one boasts about being one of “many UCC churches that advocate for personal and social responsibility.”

There you have it. Not biblical or Christ-centered, but a social gospel. Some declare this is ‘another gospel’ that is warned against in the Bible.

Author and pastor, Lucas Miles, responded by saying true Christian churches “should be leading the way to protect young minds from explicit materials and behaviors, definitely not approving of them, or God forbid, hosting an inappropriate event that appears to have been planned without the knowledge of parents—or even the school.”

“This isn’t about politics or policy anymore. It’s a battle for retaining basic moral truths and protecting a vulnerable generation of young persons from being groomed and indoctrinated by corrupt thinkers and damaging ideologies,” he continued.

We will likely see more compromise and headlines featuring professing churches and so-called pastors involved with and supporting all things LGBTQ culture. Red State recently provided a few headlines as reminders of the falling away of churches:

They are in blatant rebellion, no longer satisfied to “live and let live,” so they are openly pushing it on the rest of the country. The LGBTQ cannot reproduce so they must recruit – and they’ve been making social justice disciples of American children for decades.

How far can the radicals and extremists of the Democrat Party push these agendas. Has not the LGBTQ overplayed their hand? Apparently not, because many parents of young children seem to be just now understanding what is happening to their culture, schools, and government.

Only time will tell.

Meanwhile, Disney is doubling down on its radicalism, and thumbs their nose at concerned parents. They just launched an LGBTQ-themed apparel and accessories line called “Disney Pride Collection” of course. All profits will be donated to groups that support “LGBTQIA+ youth and families.” No commentary needed because we also recently reported on Disney’s long decline and depravity.

There is however, a growing remnant of bold, biblical Christians in America and we will gladly convert as many as we can to the truth of Christ. Calling more truth defenders and proclaimers! Let’s pray more will join the resistance and confront evil, especially when it lies within our churches.