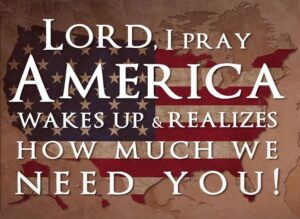 The National Day of Prayer is coming up in a few weeks, and a school board is apologizing because the true God was referred to and the name of Jesus was mentioned. Also, Joe Biden hosted the Easter Bunny at the White House, had an egg hunt, and ignored Christians by refusing to acknowledge God.

But Franklin Graham is calling on Americans to repent and turn back to God.

There are plenty of examples of the hyper-sensitivity we’ve seen when it comes to offending anyone except those who adhere to the biblical worldview. First, just over a week ago, large numbers of Muslims gathered in Times Square in New York City to openly pray and celebrate Ramadan.

But in Florida, a school board decided to commemorate the National Day of Prayer coming up Thursday May 5, and caused a controversy when one member of the board had the audacity – in America – to make an exclusive claim, stating that Jesus Christ is the one true God.

Miami-Dade County Board member Christi Fraga, who introduced the resolution, said its purpose was to unite people of all faiths and encourage those who want to get together and pray to do so. Dozens of community members attended the school board’s meeting and spoke in favor of the resolution.

Board member Lubby Navarro shared about the power of prayer helping her through a difficult time last year when her daughter was in a coma. She said by having schools recognize the National Day of Prayer, students and administrators going through hard times might be encouraged to pray and seek the Lord’s help.

But then she went too far. When Navarro referred to God as creator and said He is Jesus Christ, some were offended. The Bible states that believers have redemption through Jesus, the forgiveness of our sins, and adds:

For by him all things were created, in heaven and on earth, visible or invisible… Colossians 1:16

A 17-year-old Muslim student was offended and told the Miami Herald “the whole discussion was disheartening.” But I actually agree with what she said next:

“The fact that they just said we could all just pray together was ignorant. We all pray differently, so it’s not practical to just assume we can all come together and pray.”

Christians touting ecumenism or unifying with other religions, take note. It’s not unity that they want, it’s uniformity. And in most cases historically, Christians are the ones who often willingly compromise and neutralize the gospel.

Let’s face it, we pray to the only living God. Others pray to false gods and idols. Some pray to inanimate objects, others pray to dead people, to nature, or to the universe.

What say you? Jesus is either a liar, a lunatic, or Lord and God. If the resurrection is true and Jesus is who He said and taught that He is, then the tomb is still empty and He is alive.

Sadly however, recent research shows 94 percent of young American parents hold what is known as “Syncretism,” a blending of multiple worldviews in which no single life philosophy is dominant, producing a worldview that is diverse and often self-contradictory. I wrote about this in a recent article:

A similar and hugely popular worldview today is religious pluralism. This view can be defined as “the belief in two or more religious worldviews as being equally valid or acceptable.” This goes beyond the anti-Christian idea of tolerance, “Coexist,” or non-judgment. Religious pluralism “accepts multiple paths to God or gods as a possibility” and is usually contrasted with “exclusivism,” the idea that there is only one true religion or one way to know God.

We’re not surprised in today’s biblically illiterate society that people object to the truth of the gospel. Another example, a parent at Miami-Dade Schools was also offended by the mention of Jesus. Carrie Feit, an attorney who is Jewish, said hearing a board member evoke Jesus’ name made her feel excluded and in her words, “invisible.”

Naturally, she had no problem with uniting people of all faith backgrounds as long as theology isn’t brought up, and said about the mention of Jesus, the “final point that was put on it” was upsetting.

I get it. People hate change and pride often prevents us from admitting we’re wrong. The overwhelming evidence for the resurrection of Jesus demands a verdict. The eye-witness testimonies, the archaeological discoveries, Greek and Jewish historians through the centuries, supernatural signs Jesus performed, and more.

A decision must be made by every person regarding who Jesus is and whether or not to believe Him or reject the truth of God.

Jesus fulfilled specific messianic prophecies, He said His kingdom was not of this world, appeared to hundreds after rising from the dead, spoke of His return, said that He and the Father are One, and declared, 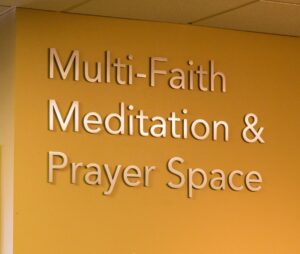 So it’s understandable the Miami school board chair emphasized the anti-Christian “Co-Exist” philosophy of religious pluralism and said their vote to recognize the National Day of Prayer shows “a sensitivity toward all groups, all religions, all creeds, all colors, all races, all people, all children.” In other words, keep God and the gospel out of it!

They’ve been keeping God out of it since He was expelled from government schools decades ago; so was the Bible and so was prayer. Did you know that on June 25th, it will have been sixty (60) years since the U.S. Supreme Court handed down its horrific Engel v. Vitale decision? That made school-sponsored prayer unconstitutional.

Did you also know that the case focused on a benign, 22-word nondenominational prayer encouraging students to recognize the authority and supremacy of God in their lives? (hat tip Decision Magazine) It simply read,

“Almighty God, we acknowledge our dependence upon Thee, and we beg Thy blessings upon us, our prayers, our teachers and our Country.”

Offensive? This is what we have allowed in part because we bought the lie of a “separation of church and state” which, by the way, is nowhere in the U.S. Constitution or any of our founding documents! And because Americans have rejected the God of Scripture and have allowed practically anything else, Franklin Graham often warns about God’s judgment and recently stated:

“Our educators have taken God out of schools. Our politicians have taken God out of politics; “All of this trash and all of this filth that the left is pushing on our students—that can be turned around if Christian men and women ran for school boards. “Our entertainment industry pushes violence. It pushes sex; The only answer… is to turn back to God and embrace Him and His Word.”

God can do all things and His mercy endures forever, but I do not see the necessary signs of repentance or revival to preserve this country a bit longer. So pray, yes, but make sure you believe in and are praying a God who can hear you, to the one true God. In the Book of Colossians, the Apostle Paul wrote to believers about prayer:

We always thank God, the Father of our Lord Jesus Christ, when we pray for you, 4 since we heard of your faith in Christ Jesus and of the love that you have for all the saints, 5 because of the hope laid up for you in heaven. Of this you have heard before in the word of the truth, the gospel.  …that you may be filled with the knowledge of his will in all spiritual wisdom and understanding, 10 so as to walk in a manner worthy of the Lord, fully pleasing to him: bearing fruit in every good work and increasing in the knowledge of God; Colossians 1:3-5, 9-10

May we conduct ourselves in a worthy manner, know Jesus more, and bear fruit that will last! At this point however, rather than to ask the Lord to bless our nation, we should pray that “God save America.” For this to happen, it has to start in and with the church.  ##