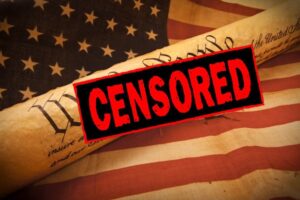 On a federal website dedicated to preserving the nation’s historical documents, a trigger warning has just been placed on the U.S. Constitution – by our own government. How many Americans do you think heard about this story?

There is an unrelenting secular-progressive agenda behind this.

British Prime Minister, Winston Churchill once said, “A nation that forgets its past has no future,” while others have paraphrased this idea and say that those who fail to learn from history are doomed to repeat it.

But this disturbing story goes beyond simply forgetting history. This is about the left in America despising our history. They hate our country so much they harshly criticize our past and their only solution is to deconstruct America. And they teach generations of children rewritten history about our ‘flawed, evil, racist’ country including how it was founded.

They redefine and tout diversity, equality, equity, inclusion, and of course, tolerance. But they conveniently ignore the fact that the realities of 18th century America include social conditions that no longer exist! You might argue ‘maybe they didn’t know.’ If that’s the case, then shame on the liberal education system!

Every September 17 is and was Constitution Day, which was a day set aside to remember the brave men and their families who risked their lives to establish a country of religious freedom, and then gathered in 1787 to improve the Articles of Confederation.

Fortunately, rather than try to improve the Articles of Confederation, they came up with a brand-new governing document — our US Constitution. Yes, the very same document about which you can now find a trigger warning at the National Archives. Why?

It is part of the attack on the biblical Christian worldview by those who oppose it and want a very different nation. They would rather frame our entire history in a negative light and blame [white] Christians than acknowledge the truth about the overwhelming good Christians have done for America (and the world) through the centuries.

Some of these life-changing advancements and achievements resulting from teachings in the Bible include:

the value and sanctity of every human life, the abolition of slavery, dignity and respect given to women, the stability of the family, advances in science, hospitals and health care; labor practices, economic freedom, educating the poor, feeding the hungry, caring for the sick, reforming laws to protect the weak, art, literature, architecture, education, philosophy, compassion, charity, justice, and equality.

In my new book, Canceling Christianity, I was compelled to write an early chapter on “The Historic Impact of Christianity” to help lay a foundation because most people have forgotten our history.

Christianity and the church are and were absolutely essential to the preservation of  America! Since this is no longer taught in government schools, how can we expect people today to know the truth, especially when they’re bombarded by lies and propaganda? As Christians, we must not be ignorant like the world.

The Bible states in Hosea 4:6a:

My people are destroyed for lack of knowledge; because you have rejected knowledge…

Those men who gathered in Philadelphia in 1781, just a decade after the War for Independence were farmers, lawyers, military men, and leaders in their respective states. Most were married and had children. A couple of them had even signed the Declaration of Independence.

The National Archives and Record Administration (NARA) is a federal agency that basically acts as a keeper of government documents for legal or historical reasons. If you’re looking for the original Constitution, for example, you can go to the National Archives Catalog and view it. And now, right there at the top of the page you’ll now see this warning: “Harmful Language Alert.”

Of course, they provide a helpful statement on what they consider potentially harmful language.

In an article at The Daily Citizen asking why the federal government put a warning on the U.S. Constitution, they list the offenses you might suffer by reading it. The famous historical document may:

Is all this necessary? Apparently, woke government minions decided that we needed a trigger warning in order to read the documents that helped establish the foundation of our exceptional country. A committee was formed at the National Archives to identify problematic issues, you know, things most students on college campuses are also concerned about.

One of the recommendations by the committee is to “create a road map for correcting harmful language” and correct descriptions on many of our historical documents. This begs the question: what are their plans after the proposed “road map” is created, and can these people be trusted to use accurate and honest descriptions of our documents?

Ironically, this story broke the very same week Constitution Day was supposed to be remembered in America. I checked a few of my calendars and it’s not mentioned. Of course, this doesn’t change what the documents say or mean, but these apparent efforts to criticize, minimize, or sanitize this country’s history – based on the biblical worldview – must be noted here.

Don’t trust the government, schools, media, or the movie industry to portray or teach the truth about our history, especially when the left wants to change, dismantle, or “reset” our nation – due in part to the godly principles we were founded upon.

With the current state of the church and culture it may be too late at this point, but as long as we’re here, it’s still up to concerned citizens, church leaders and parents to take seriously the honor and responsibility of passing down the great Christian heritage of America to our children.

Get the book, Canceling Christianity today!

Power – By Any Means Necessary
Biblical Worldview Being Cancelled, The Soul of America at Stake (excerpt)