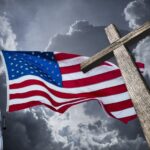 It didn’t happen overnight. While we were sleeping, the enemy of our souls and enemies of America have worked overtime over the last 75-100 years to cancel Christianity. I often refer to these minions as “forces of darkness – both human and demonic.” Truth be told, God will never be nor can He be cancelled, but His children and the influence of His church have been under increasing attack. The enemy is relentless, and it appears he has planted more weeds than we have seeds.

We are living with the consequences today.

[This is an excerpt from the 2021 book, Canceling Christianity; the following is from a chapter called, “Epic Battle for the Soul of America.”]

Pastor Jack Hibbs said it is imperative that “The church needs to get back to the Bible, and the country needs to get back to the Constitution.” I agree! And yet, many of us are wondering if it’s too late. Last year, George Barna released another one of many disturbing studies we’ve seen in recent years. This one found that fewer people in America today believe in or support Christianity. The alarming title was:

“U.S. Moving Toward Elimination of Biblical Worldview as Cornerstone of Society”

Stop for a few seconds and consider the word, “elimination.” It took time to reach this point. There has been a furious conflict in the spiritual realm over the United States since its inception. And the battle has never been more intense or misunderstood than it is today.

Like the spiritual warfare over the souls of men, there are battles in heavenly realms over nations because of what
they stand for as well as over the people in those nations. The enemy hates America because of the God we were once united under and the believers who represent Him. Part of the epic battle manifests as hatred directed at Christians.

There are also cultural conflicts about worldview; heaven and hell, good and evil, righteousness and unrighteousness, freedom and bondage, truth and lies, but it all comes down to three words: God or man.

This is why we see the intense, moral battle for America’s soul and over whether or not to uphold the US Constitution as the law of the land. Though not perfect, America made it this far in history because we once sought to glorify the Lord, obey His commands, and there was no resistance to advancing the Christian faith…

The left has used Hollywood, for just one example, to accomplish much progress for godlessness. They censor believers out of television programs while adding LGBT characters to most primetime shows. They only portray LGBT people in the best possible light while depicting Christians as narrow-minded, bigoted, and ignorant. They use TV and the media to ridicule God and the Bible, and almost never show Christians in a positive light such as giving to charity, praying for others, going to church, helping those in need, doing charity work, etc.

Barna also said most Americans are oblivious to the “real civil war ravaging the nation.” When we disagree about foundational issues such as God as Creator, gender—male and female, marriage, family, and the personhood and sanctity of preborn lives in mothers’ wombs, where can you go from there? Moral relativism and cultural chaos.

“Of all Americans surveyed in general, 58% agreed that “identifying moral truth is up to each individual; there are no moral absolutes that apply to everyone, all the time.” One third, or 32%, disagreed, and one out of ten adults said that they do not know.

“The typical American believes, ‘Truth is what I say it is, and no one can tell me otherwise,’ ” the Center mourns. “Americans believe that right and wrong can only be discerned by each individual, based upon their feelings and circumstances; and that what is right for one person might be wrong for another but each must have the freedom to make those choices without external judgment.”

Note the emphasis on our feelings. No absolutes, no judgment, it depends on the person. There is nothing new under the sun, and the rapid decline we are seeing shouldn’t surprise us. It is just so disappointing for those who know Jesus, history, and the kind of country this used to be.

…We are Christians first, American citizens second. But it is our duty to use the privileges we were given to move the country toward God, not away from Him! Since we dropped the ball and practically backed out of the public square over a half-century ago, here are some tragic repercussions:

… This is not about politics nor about left or right; it is a worldview war. One with God, and the other, without God. What kind of country do you want to live in? Remember, the enemy of our souls hates America and the foundation she was built upon. That Rock was Christ. All other ground is sinking sand.

I realize it is difficult for many people to comprehend why people within our own borders would want a godless, global society and want to sink this great nation. This battle is first, spiritual. We have lived as if we’re on a cruise ship when we are actually on a battle ship. There is a war on the Truth of Christ!

Therefore, a big part of the solution must be the awakening, repentance, revival, and strengthening of the church. How should pastors and everyday Christians respond? I came across this quote from John Calvin:

“A dog barks when his master is attacked. I would be a coward if I saw that God’s truth is attacked and yet would remain silent.”

And yet, in America, God’s Word and His church have been under constant attack, along with our faith, freedoms, and the US Constitution.

Some have heard the alarm bells! There are more patriot pastors standing up for the truth across the country. There is also a growing movement of godly leaders, influencers, and believers actively living out their faith in every aspect of society.

If we love our God and our neighbors, we will naturally want to preserve the country we live in. The bigger task, however, is to spur into action those on the sidelines – in many of our churches – who claim the name of Christ. We must repent, confront evil in our nation, focus on Christ, and prepare for what is up ahead. Jesus is returning and judgment is coming.

The Lord has been patient with us, but His patience will not last forever.

*As I wrapped up this blog post, the following reminders came across my desk:

America is saturated in ungodly sin and God has turned His face away from us (Romans 1; Proverbs 1). Consider that:
How long do you think God will tolerate this evil rebellion and hold off His judgment?
Good question. Come, Lord Jesus!

Christianity, Church ‘Essential’ to the Preservation of America