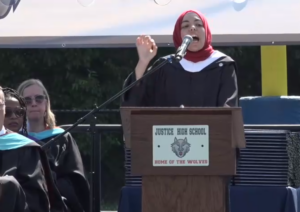 It’s one thing to cancel the Pledge of Allegiance in many American schools across the U.S. It’s another thing to lead students in pledging allegiance to a false god. But this is what happened recently at a VA high school graduation. One nation under – Allah?

Also during the same woke ceremony at recently renamed “Justice” High School, over 500 graduates gathered to hear a Muslim member of the Fairfax County School Board mention jihad, warn about white supremacy, and rally for social justice.

First, the class president recited the Pledge of Allegiance and referred to it as “the nation’s anthem” by inserting the phrase “one nation under Allah,” which caused a bit of a controversy. Naturally, the school had no idea where such ideas came from and stated it did not pre-approve the change in wording to the pledge of allegiance.

But what did she mean that our nation’s allegiance should be to the Islamic god, Allah?

I think there might be a theme here because in the keynote address from Abrar Omeish, she told graduates that they’re entering a world full of “racism, extreme versions of individualism and capitalism, [and] white supremacy.” She also spoke in Arabic and mentioned the “struggle” which is translated from the word, “jihad.”

To be clear, the word Islam means “submission” and Omeish made it clear that the graduates were expected to be good social justice activists. She warned them not to be neutral in the fight for justice.

There’s that word again. If truth has been redefined as we know it has, it’s not surprising that equality and justice have also been hijacked by the left.

But wait, there’s more to this story.

The Daily Wire reported the student government president introduced Omeish by praising her for being “Virginia co-chair for the Bernie Sanders campaign.” Hmm, the plot thickens. And if that weren’t enough:

…her father, Esam Omeish, was a “leader and a board member of the Dar al-Hijrah Islamic Center” who “raised his daughter to be an outspoken woman.” Omeish noted that her dad was in the crowd; The outlet added that two 9/11 hijackers and the 2009 Fort Hood killer attended the Dar al-Hijrah mosque — and that its American-born imam was Anwar al-Awlaki, an American who was killed under former President Barack Obama for his connection to terrorism.

As the saying goes, the apple doesn’t fall too far from the tree.

Omeish also recently tweeted about Israel being a colonizing state that “desecrates the Holy Land” and “kills Palestinians.”

So what should be think about this? Well, it is Virginia and near D.C. But please understand Islam and Christianity are completely incompatible and are contrasting worldviews, and we warned about this two years ago.

Those who are naïve might suggest this kind of radicalism and rhetoric is happening only at a few select schools. Let’s not have our heads in the sand when it comes to the godless, anti-American agenda of the left and the secular-progressive government controlled “education” system in America.

They have been successfully deceiving young people into thinking Christians and Jews are to blame for the world’s problems. These lies must be refuted and replaced with truth. If more American citizens don’t get involved, we’re in deep trouble.