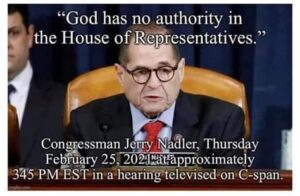 Democrat Leaders Cancel God from Congress. That’s the headline. It’s no surprise the left continues to blot out God in America, but notice that very few seem to object.

New York Democrat, Jerry Nadler slammed the Bible and its author last week during a debate over the destructive and demonic “Equality Act,” once again proving liberal Democrats aren’t interested in God or biology… or science… or truth!

I reported on this two years ago when the Pelosi Democrats tried pushing The Equality Act, but failed due to a lack of votes and no public support. Sadly, it’s back. For Democrats who do not support this insane social experiment, you voted for it.

But what must be noted today is that once again, the hatred toward God and Christians is exposed for all to see. At least Democrats are being honest about their view that if you don’t submit to progressive ideology, you have no voice regarding public policy.

For those of you who don’t believe Jerry Nadler actually said that they could care less about God’s will, check out this exchange:

Democrats were upset that someone had the audacity to refer to God and the authority of the Bible, and several of them shamed the Republican for being transphobic and intolerant. But it was Congressman Nadler’s response that makes headlines today for saying,

“Mr. Steube, what any religious tradition describes as God’s will is no concern of this Congress.”

In other words, take your God and your Bible and leave them out this. If you’ve been paying attention in recent years, it’s not surprising Nadler and the Democrats would attack someone standing up for the truth, but take note that they are now emboldened and unashamed to do so.

Nadler was responding Florida Republican Greg Steube who said that passing a radical bill like the Equality Act goes against what is laid out in Scripture. He pointed to the ultimate authority of the Bible and said transgender individuals are basically suggesting God didn’t know what He was doing when He created mankind.

Steube made the case that gender is biologically assigned at birth and it is a lie to think we can “reassign” our sex. He also quoted from Deuteronomy 22:5 which simply states:

“‘A woman must not wear men’s clothing nor a man wear women’s clothing, for the Lord your God detests anyone who does this;”

This isn’t just about clothing, but rejecting the Creator. During the debate in Congress, there were powerful arguments against dangerous and extreme legislation, but the Biden Harris Democrats are committed to the godless cause. Steube added his concern for the soul of America saying:

“The gender confusion that exists in our culture today is a clear rejection of God’s good design. Whenever a nation’s laws no longer reflect the standards of God that nation is in rebellion against him and will inevitably bear the consequences,” he said. “We are seeing the consequences of rejecting God here in our country today.”

Notice the lack of defense of the Equality Act and instead of having a good argument, they attack God and Christians. Expect more of this.

Jerry Nadler essentially reflected the Democrat worldview to banish from the halls of Congress the Almighty whose laws our Constitution is founded upon. This will not end well. Ironically, all sessions of the House begin with a prayer as did this session.

One more point, and we are seeing a parallel of this alarming reality throughout our culture. Think about the reaction to Nadler’s thumbing his nose to the will of God. Or should we say, the lack of objection from his peers? Apparently, not one Democrat defended the truth of Scripture or had any desire to keep God in Congress.

Over in the public square, Christians are attacked, discriminated against and mocked as the Bible warns. Conservatives and freedom-loving Americans are cancelled or censored. This country has changed; and the O’Biden administration will continue fundamentally transforming the United States of America.

Think about this: if you like or love something, there’s no reason to change everything about it like Democrats are doing to the country. President Biden has openly proclaimed their mission to oppose the God of the Bible, religious freedom, and followers of Christ.

If you’re not convinced the left is banishing debate in big tech, Congress, and culture, Amazon and others have now removed author, Ryan Anderson’s book, When Harry Became Sally: Responding to the Transgender Moment. His and other books with views opposing the radical left were banned, many without explanation.

Unless we become more engaged and raise awareness about this pivotal battle in our free republic, they will turn this country into something most of us will not approve of. Should the so-called Equality Act pass the Senate, special rights will be given to LGBT individuals while God and orthodox religion will be forced out, not only from Congress, but schools, businesses, social media, charities, medicine, and soon, even churches.

The left abandoned God long ago. Wake up! Speak up! And don’t allow them to force the entire country to abandon Him as well.