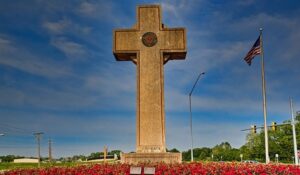 I just got back from a pastor’s conference in Dallas, Texas and I’m happy to report a growing movement of godly men are committed to speaking the truth, refusing to back down and be silent about what’s happening outside the walls of our churches. There’s a sense of urgency among the remnant to mobilize Christians to engage, vote, and help preserve this great republic under God.

Where does your pastor stand? Some of you think we shouldn’t be discussing issues dealing with government and elections and politics in church. The truth is someone’s morality will be legislated in Washington that will affect our lives – and we have a say.

We’re just 8 weeks from a huge election at a pivotal time in our history!

E-Day is exactly two months from today! Thanks to the American Family Association, Family Research Council and many others, there are serious efforts to reach Christian leaders across the country and encourage them to understand the times, to prepare and rally their congregations.

In addition to the gospel and teaching the whole counsel of God, if your pastor isn’t talking about the importance of liberty, cultural impact, worldview, the role of government, and politics from the pulpit, please encourage him to do so.

We’ve got work to do because many have been deceived. They fell for the lie that we must keep church and state separate, but that’s a misunderstanding – not only of the U.S. Constitution but of the truth. Christians are to infiltrate culture, not isolate from it!

Don’t believe rewritten history that suggests America’s founders and pastors didn’t intend to live in a country influenced by God and Judeo-Christian values. That’s what our Constitution is based upon – the Laws of Nature and Nature’s God! But millions of professing religious Americans don’t seem to care – because they don’t bother to vote.

And we’re now in danger of losing this republic.

In this nation, we are blessed to have a voice. We have the right, privilege and responsibility to engage in the process of electing leaders to represent us – who in turn pass legislation that will affect nearly every aspect of our lives.

Christian, you are commanded in Scripture to love the Lord, love your fellow citizens, and do good; to shine the light of Christ in society, and to be a flavoring and preserving salt in culture. So why is morality in America decaying? We have not done a good job in these things and will one day answer to God for what we did and did not do.

Never be ashamed of the good news of salvation through Christ alone! Get back in the game. Remember, social and “political” issues ARE moral issues, and the Bible has much to say to guide Christians about what to believe, what to support, and yes, even about what to look for in electing leaders.

In less than two months America will be deciding the direction of the country as citizens get to exercise our God-given opportunity to vote. Think about this: millions of Christians did not show up to vote in 2012, and you know what happened in the last election. Close call!

Some of those are merely professing Christians and may not even be converted, but here’s the point: if true, Bible-believing Christians voted in elections, results wouldn’t even be close and we’d have more godly men in office! Why?

When we hold a true, biblical worldview, the choices are incredibly clear because the party platforms show two sharply different versions of America. One platform rejects God, family, moral absolutes, and self-restraint; man and government are god. The other platform understands God is our authority, and society functions best with healthy families and religious freedom; we live our lives loving God and our neighbor, and by biblical morality and the rule of law.

But sadly, culture has influenced too many Christians rather than the other way around, and liberalism has infected the church like a virus. Since we dropped the ball and backed out of culture over a half-century ago, here’s the residual effect:

Truth has been redefined, God is mocked, prayer and the Bible expelled from public schools, God’s Laws from the public square; but sin is celebrated, pleasure exalted, abortion legalized; we’ve seen the increase of adultery, divorce, homosexuality, rampant promiscuity; intolerance of Christiaity;

And this is an abbreviated list! But you still have a say.

Like many across America have observed, it is stunning the speed with which our history, spiritual strength, economy, and very way of life has been dismantled.

Let’s admit we took much for granted and became comfortable. In this blessed nation, believers let down our collective guards and today’s church resembles the lukewarm church of Laodicea that Jesus warned in Revelation chapter 3.

In order to have a healthy nation, we need a healthy, vibrant, influential church committed to preaching the gospel of repentance. But even though the church has done some good things, we haven’t been a truly healthy nation for quite some time.

Maybe you’ve heard about the following historical concept on the cycle of freedom, about how great nations have risen and fallen through the centuries. As you hear this, think of how America was founded – and where we are today. Here’s how it works:

The people generally go from bondage to spiritual truth which leads to great courage; from courage to liberty, from liberty to abundance and prosperity; from abundance to selfishness, from selfishness to comfort and complacency, from complacency to apathy, from apathy to dependence, and from dependence back into bondage.

Our problems in this country are more daunting than one election could possibly fix, but it would be a start.

Why do you think there have been constant opposition and attacks on the Trump administration and anyone who doesn’t toe the tyrannical leftist line? There is a very real enemy of our souls who hates America and the foundation she was built upon. That Rock was Christ. All other ground is sinking sand.

But why would some people within our own borders want to sink this great nation? Understand this battle is spiritual; so part of the solution must then be the revival and strengthening of the church. At the same time we must fight for the blessings – including freedom of religious expression – that have been pillars in our history.

The opposition has been relentless. Here are some of the groups and entities who want a very different country:

On the surface, they’re against President Trump, of course, because he ruined their plans to coronate Queen Hillary with power in 2016. But they’re also opposed to our history, the Constitution, capitalism or what the United States represents.

So basically, they’re anti-American. The Pledge of Allegiance is offensive, in God they do not trust, and the National Anthem is not their anthem.

Enemies of Truth almost seem possessed to achieve their goals no matter the cost. They justify destroying life, property, and authority to gain power for their evil lords. It’s demonic at its core, and as we are seeing, they will hold nothing back.

I reported a month ago on globalists who have been working on breaking down the American system in order to form a one-world government, and some of them are gladly using the corona-virus to re-set the country and free market system.

If you still don’t think voting is vitally important, you may be part of the problem.

We can only speculate what will happen in November, but the chaos we’re seeing on the news and in our cities is all part of a smokescreen meant to distract and prevent people from seeing the truth about what’s really going on.

Christians must again recognize how precious and even vulnerable our freedoms are. You’ve heard it said politics are downstream from culture meaning culture influences government. Ideally, faith and religion should be shaping culture which in turn shapes politics.

Do you love God and the country you live in? Then believers must mobilize! Pray! Decide now to encourage as many people as possible who claim the name of Christ to speak up, get off their butts and out of their house and vote to preserve liberty.

God has shed His grace on us, but the Bible says his patience won’t last forever. It’s up to you, me, and the church. And in November, we the people will decide.