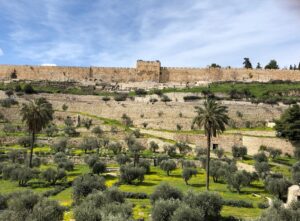 As Palm Sunday 2020 approaches, let’s look at this historical event that represents the determination of Jesus to make it to the cross of Calvary to die for the sins of the world. So how does that historical event impact us today and give us hope?

Jesus planned it all out in detail before He was even born. After thirty years on earth, His time had come. Just days before He was arrested and crucified, He rode into Jerusalem – on a donkey. Why did the multitude shout and lay coats and palm branches on the road some 2,000 years ago?

Why were they celebrating, and what were His followers thinking while the people roared with joy as Jerusalem rocked with excitement?

The King was coming.

Palm Sunday will be here in a few days which means Resurrection Sunday is just one week after that. In this crazy, fascinating, unprecedented time we find ourselves in due to COVID 19, many Americans have been watching on line church services and practicing social distancing.

As predicted by the Prophet Daniel, the exact day of Jesus’ grand entrance into Jerusalem was very different. Expectation filled the crowds during the Jewish feast of Passover as stories about Jesus spread across the entire land.

In the Old Testament, Zechariah 9:9 predicts a sign of the Messiah, and states:

Rejoice greatly, …Shout in triumph, O daughter of Jerusalem! Behold, your king is coming to you; He is just and endowed with salvation; Humble, and mounted on a donkey; Even on a colt, the foal of a donkey.

Jesus fulfilled this prophecy which was a sign to all those who knew the Holy Scriptures. The King was coming, and He would enter the city riding on a donkey.

Picture the scene. Author, doctor, and gospel writer, Luke explained that as Jesus approached the Mount of Olives the whole crowd began to praise God joyfully with loud voices for all the miracles they saw Jesus do.

The Apostle Matthew stated most of the crowd spread their coats in the road for Jesus to ride over, and others cut branches from the trees and put them in the road. He wrote:

The crowds going ahead of Him, and those who followed, were shouting,

“Hosanna to the Son of David;
Blessed is He who comes in the name of the Lord;
Hosanna in the highest!”

10 When He had entered Jerusalem, all the city was stirred, saying, “Who is this?” 11 And the crowds were saying, “This is the prophet Jesus, from Nazareth in Galilee.” Matthew 21:9-11

They knew what was written about the Messiah. We, too, have the Scriptures to confirm so many prophecies including some yet to come. Check out what John wrote in the Book of Revelation about the future Millennial kingdom following the Great Tribulation:

“After this I looked, and behold, a great multitude that no one could number, from every nation, from all tribes and peoples and languages, standing before the throne and before the Lamb, clothed in white robes, with palm branches in their hands, 10 and crying out with a loud voice, “Salvation belongs to our God who sits on the throne, and to the Lamb!” Revelation 7:9-10

The Lamb of God took away the sins of the world! We just have to believe. The King had conquered. He had a mission to accomplish – which He did – because if you recall some of the last words of Jesus after being executed on a Roman cross were:

The writer of Hebrews put it this way:

“[L]et us run with endurance the race that is set before us, 2 looking to Jesus, the founder and finisher of our faith, who for the joy that was set before him endured the cross, despising the shame, and is seated at the right hand of the throne of God.” Hebrews 12:1-2

This is a God worthy of our worship. The King of Kings and Lord of Lords. All others are counterfeits and copycats. Jesus is the way and His Word is truth! Make no mistake: all religious pathways do not lead to the living God.

So this Palm Sunday, wherever you worship, think about that historic entrance of Jesus through that Eastern Gate in Jerusalem. And when He returns and His feet touch down on the Mount of Olives, He will enter the city through that same Eastern Gate!

The cross had to come before the kingdom, and He is returning to judge the living and the dead, and to take us to be with Him forever.

As Jesus said, “I am with you always, even to the end of the age (Matt. 28:20).” He is our hope; He is our peace; He is our salvation. In this world we’ll have trouble, but Jesus overcame it all and destroyed the last enemy of mankind: death.

Have a meaningful Palm Sunday. God bless you, stay healthy, and keep speaking the truth about things that matter.

What Pandemic? Abortion Still Open for Business
The Historic Impact of Jesus’ Triumphal Entry into Jerusalem