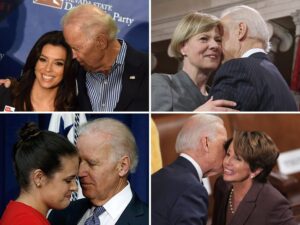 What a difference a political party makes. A few years ago, CNN published more than 700 articles on Christine Blasey Ford and aired hundreds of hours of televised discussions in the face of a complete lack of evidence that Justice Brett Kavanaugh sexually assaulted her.

Why now the silence from Hollywood celebrities and the media over sexual assault accusations against former VP, Joe Biden? Where’s the #MeToo movement? Is Biden off limits? Or has the glaring media hypocrisy and double standard now been accepted as normal?

Unlike Blasey Ford, Tara Reade told multiple people at the time that Joe Biden sexually assaulted her, not three decades later. Reade worked for him in the U.S. Senate and actually has friends from that time who recall Reade talking about the assault.

But since when does truth matter to the Democrat media complex? This is sickening.

What about ABC, CBS, and NBC? Immediately following the report of accusations against Kavanaugh, they were all over it. In those first twelve days of Ford’s claim, the morning and evening news shows churned out 305 minutes of coverage – all assuming Ford was telling the truth and Kavanaugh was a guilty, lying, misogynist.

Three hundred five minutes. In just twelve days! So how many reports, articles or interviews were done by the liberal media in the first twelve days of Tara Reade’s sexual assault charge against Joe Biden? Zero. None. Goose egg. Silence!

When Christine Blasey Ford accused federal judge Brett Kavanaugh of nearly killing her and trying to rape her when she was in high school, she was unable to provide any evidence that the two had even met. That didn’t stop media outlets from doing everything they could to destroy Brett Kavanaugh’s life and keep him from becoming a Supreme Court Justice. When Tara Reade accused her former employer Joe Biden of sexually assaulting her when he was a United States Senator, media outlets buried the news.

Then there’s NPR, aka National Progressive Radio. Almost a month after Tara Reade accused Joe Biden of a 1993 sexual assault, and a week after the nation’s top newspapers finally touched the story, NPR issued a report on Sunday morning. This is slow for NPR, which was the very first to champion the unproven sexual-harassment charges of Anita Hill against conservative Justice, Clarence Thomas in 1991!

Speaking of the disgraced Washington Post, columnist Ruth Marcus wrote a book called “Supreme Ambition,” about the sexual assault accusations against Justice Kavanaugh, and naturally defended Christine Blasey Ford at the time. Guess what Marcus says today? The “#BelieveAllWomen” and “#MeToo” movement are “dumb” — because a credible sexual assault allegation has been leveled against former VP Joe Biden.

Are you beginning to see the problem here? Friends of Tara Reade say they remember her speaking about the assault around the time it happened, as well as a willingness on Reade’s part to approach law enforcement with the claims.

So, where’s the Women’s March? You know, the same mob that kicked out Christian, pro-life women because they didn’t meet liberal standards? Have you heard an activist or feminist say anything at all since the allegations came out a month ago against Joe Biden? I didn’t think so.

Where are the elite Hollywood celebs? Where’s Lady Gaga? She even did a PSA with Biden about sexual abuse. I know, awkward.

And when the former Vice President appeared at the 2016 Oscars to discuss sexual abuse, the fawning Hollywood Democrats gave him a standing ovation.

Alyssa Milano was one of the main social media drivers of the mob fury toward Justice Brett Kavanaugh, so when she remained silent about the Biden sexual assault, fair-minded people began calling for her to address it.

Then, when she finally did, not only did she endorse Joe for president in 2020, but apparently she has changed her mind about due process and thinks Biden should be given the benefit of the doubt.

But proving we should not put all of Hollywood into the same hypocritical basket, kudos to actress Rose McGowan who called out Milano addressing her directly via Twitter:

You are a fraud. This is about holding the media accountable. You go after Trump & Kavanaugh saying Believe Victims, you are a lie. You have always been a lie. The corrupt DNC is in on the smear job of Tara Reade, so are you. SHAME

Biden has done plenty of interviews in the last month, and out of nearly four dozen questions, not one person asked about his newest accuser, Tara Reade. But do you know what irresponsible hosts like NBC’s Chuck Todd invited Biden to do? Trash Trump of course and comment on the coronavirus outbreak:

“Do you think there is blood on the President’s hands?”

Then, Brooke Baldwin at CNN gave Biden another 6 minutes of free airtime, with no questions about sexual assault charges, and asked three times:

“Mr. Vice President, do you think President Trump is responsible for the deaths of Americans?”

We’re learning a lot during this time. In an NBC News poll, people are split over trusting what President Trump says related to COVID 19. But NBC ignored their own results that only 26% of Americans trust what Joe Biden says. Now that’s pretty inconvenient when the poll is done at a liberal entertainment outlet like NBC.

Finally, in the former VP’s own words during the Brett Kavanaugh hearings, he immediately stood up for Christine Blasey Ford, saying:

“For a woman to come forward in the glaring lights of focus, nationally, you’ve got to start off with the presumption that at least the essence of what she’s talking about is real.”

This is one time I agree with Joe Biden. So finally, a political correspondent mentioned the story, but what angle did CNN take? Was there any concern for the woman who came forward? Nope. Democrats are worried about how to handle the incident, so rather than factual reporting, the media is wondering how they’re going to fix this inconvenience. Sad.

Media malpractice is on full display on this story as well as the current so-called “reporting” on the coronavirus, exposing the agenda of the media to take down Trump even if it means destroying the economy or in this case, covering up abuse.

Americans can demand the media tell the truth and report fairly – and we should – but they are too far gone and cannot be trusted. They just can’t help themselves and it’s clear they no longer serve all American citizens. Don’t watch, listen and by all means, don’t believe them.