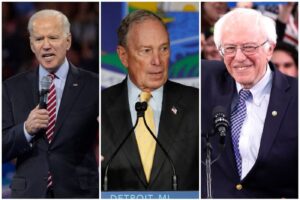 UPDATED: In U.S. political news this week, old Joe Biden has been revived by the Democrat establishment, and marching orders to support him went out early this week.

As for the relevant candidates, professional Scripture twister, Mayor Pete ‘Blasphemer’ Buttigieg took his cue and left the race to get his supporters behind Biden. There’s also one less billionaire running. Hedge fund manager, Tom Steyer dropped out after having spent hundreds of millions and failing to be competitive in a single state.

Millionaire, Senator Elizabeth Warren also threw in the towel after staying in the race just long enough to play spoiler for Sanders on Super Tuesday or maybe lobby for a VP spot with whoever gets the nomination. Warren is in her early seventies and was quite irrelevant throughout the campaign. But hey, she’s a woman, so it’s not as bewildering she lasted this long.

And maybe the most competent candidate, MN Senator Amy Klobuchar stepped down as well, most likely pressured by the Democrat leaders and controllers.

What is both fascinating and ironic is up to now, the Democrat media and party leaders have been preaching their tedious talking points about how “woke,’ diverse, young, and inclusive their party is today.

THE AVERAGE AGE of the top candidates? 78. (While Warren was still in, 76) And get this: the top three front-runners are filthy rich old white men! I guess they can no longer use this angle to attack Trump. Get the popcorn ready, we’re in for a wild ride!

So out of the top four contenders, three were three millionaires and one billionaire. And they’re old. Sanders would be 80 his first year in office as president (God forbid)! Bloomberg is 78, Biden is the spring chicken at 77 years old.

The reality the Democrats find themselves confronted with goes completely against the rhetoric they’ve been spewing for years about being the party of youth and diversity.

Victor Davis Hanson of the Hoover Institution summed up thier weak candidate problem by saying the current field is the worst we’ve seen since Walter Mondale lost in a landslide to Ronald Reagan.

In an interview last night with Tucker Carlson on Fox News, Hanson added:

After a year of all this “woke-ness” and diversity, what did we end up with? We ended up with three old white guys that are 77 and 78 with a neo-Marxist as the presumptive leader. And all of them have a history of insensitive remarks about women or things they’re written. So it’s the complete antithesis of the whole premise of the Democrat Party.”

I find this fascinating for many reasons. Do you remember when progressives and the liberal Democrat media mocked the idea of Donald Trump being elected president because of his age?

And you’ve probably forgotten how they blasted John McCain in 2008. One of the many Hollywood actors who think they have all the answers, Matt Damon, once said in an interview that McCain probably wouldn’t survive his first term and then we’d have President Palin.

Hmm. All these doomsday proclaimers are pretty quiet about the old age argument all of a sudden!

BREAKING: Mayor Mike Bloomberg drops out to endorse Biden! The New York billionaire laid out roughly $550 million in just over three months of campaigning, all to get a paltry 44 delegates; Bloomberg spent a mind-boggling $5.4 million a day! In California alone, Bloomberg spent $41 million, enough money to give every homeless person in the state $271.

And to those of you who are part of the ridiculous “Never Trump” movement who say we need to be concerned about character, morality, and principles, are you seriously willing to be so hypocritical as to rally behind one of the candidates who support abortion on demand, are against religious freedom for Christians, or one that supports some level of gun control, another who compliments communist regimes?

Do you really support a candidate, Joe Biden, who said transgender equality is the great civil rights issue of our time, and was part of the administration that began the push for socialized medicine in the United States?

Another takeaway is the fact there may not have been a single moderate Democrat running who had a realistic chance to win the party nomination. This should tell us a lot about the downward spiral and leftward sprint of politics in America. And of course, Buttiegieg and Klobachar have been strongly encouraged to endorse bumbling Joe Biden.

So what do we make of all this? To my Christian friends especially, please read and know what the Bible teaches. Please don’t be silent, but engage in culture and be the preserving salt and the shining light Christians are instructed to be. And please vote your conscience.

Please don’t support government over God, don’t endorse infanticide or the slaughter of innocent children. Please don’t condone by your vote, gay rights or the lie of “progressive” or “gay Christianity,” the moral relativism of transgender ideology, socialist theft, climate alarmism, or the endless attacks on our constitutional rights to worship Jesus Christ, live freely, and share our faith.