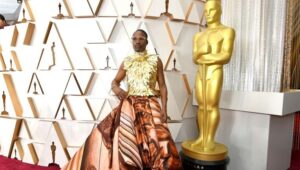 Either Hollywood elites are in denial – or they just don’t care that, year after year, awards show ratings keep hitting record lows. Either way, high numbers of viewers have tuned out.

The Oscars night of narcissism kicked off Sunday with singer, Janelle Monae opening the show by declaring herself a ‘proud’, ‘black queer artist telling stories.’ The awards show also included shout outs to communism, feminism, and Black History Month, as well as the typical Republican bashing, and cracks about climate change deniers.

Hmm. I wonder why Americans are fed up with Hollywood.

When Jennifer Lopez was recently told that her Super Bowl halftime sex show offended millions of families, she said ‘that’s just silly.’ We basically get the same reaction from celebrities and the most powerful people in entertainment as they deny there’s a connection between celebrities spewing extreme liberal views and rapidly declining TV ratings.

Twenty years ago, the Oscars had 44.6 million viewers. Sunday night, it fell to an embarrassing low of 23.6 million. (Still way too many people watching if you ask me.)

By comparison, the decline for this year’s Golden Globes includes a 10 percent drop in the 18-49 year-old demographic, while the Grammy’s dropped 6 percent in average viewers. The Emmy Awards last September saw a staggering ratings decline; a 32 percent fall in viewers.

This year’s Oscars lasted more than three and a half hours and suffered a 20 percent drop to a new record low. TO be fair, part of the reason could be millions of Americans haven’t seen or heard about many of the nominated movies, and people don’t go to the theater as much anymore. Then there’s the obvious and tedious Hollywood hypocrisy when we get lectured by award winners.

Brad Pitt won Best Supporting Actor for his role in Once Upon A Time in Hollywood, and explained how he thought President Trump’s impeachment trial should have gone.

‘They told me I only had 45 seconds up here, which is 45 seconds more than the Senate gave John Bolton this week.  I’m thinking maybe Quentin (Tarantino) does a movie about it and in the end the adults do the right thing,’

Adults. So, Republicans and those who agree with them are children who just don’t know any better. Got it. Oh, and Pitt is one of the many stars who flies around the world in private jets and then blame average, hard-working Americans for polluting the planet.

In case you missed it, Marxism also made an appearance at the Oscars. This is the year of the feminist and, as Sigourney Weaver confirmed, “all women are superheroes,” in the spirit of diversity, I’m going to score a few points now by mentioning a female winner.

The best documentary award went to Obama-endorsed American Factory and co-director Julia Reichert , who quoted, ready – The Communist Manifesto. She said, “we believe that things will get better when workers of the world unite.”

More people are working than ever before in the U.S. and unemployment is at record lows across the board. What does she mean? Is this a call to take down America? I remember hearing that from union leaders campaigning to elect Barack Obama twelve years ago. Expect more radicals to be emboldened with Democrat Socialist, Bernie Sanders, one of the top 2020 presidential candidates.

Next, before quoting the pro-cow speech of the night from vegan of the year, it was unclear why the Oscars failed to mention actor Luke Perry during the 2020 segment, “In Memoriam.” The montage snubbed actor, Luke Perry, who suffered a stroke and died last year. Perry was best known for his role on Beverly Hills 90210 in the 1990s.

Finally, as if we need to demonstrate how out of touch wealthy elites in Hollywood are, Joaquin Phoenix accepted the Best Actor award for Joker, and here’s part of what he said:

‘I’ve been thinking a lot about some of the distressing issues that we are facing collectively. At times, we feel or are made to feel that we champion different causes but for me I see commonality.

Not exactly what’s on the average American’s mind each day unless we’re listening to the media constantly telling us what to think about and who we should hate. We should all be against injustice – in the truest meaning of the word, but many times, injustice is redefined by those accusing others of being unjust in some way.

It’s easy to pick on rich people whose lives revolve around themselves and those who serve their needs. But Mr. Phoenix said these issues are “distressing.” Why the fight for ‘equality’ when every human being was created equal by God and has value?

It’s not equal rights they demand, it’s special rights; and you know it. Those gender or queer rights will then logically infringe on the lives and rights of those who believe the Bible is true and who simply want to live according to their faith. Christianity is in the way of many of these agendas which is one reason they look down at us with disdain.

Whether you acknowledge it or not, sin is the biggest problem human beings have on this earth. All the rest is temporary; it’s about money, power, control, and influence.

The truth is that God is just, His coming judgment will be swift, and we need to pay for our sins. The good news is Jesus stepped into human history and paid the price for all of us, making a way for us to be forgiven and saved.

Whether you’re in Hollywood, small town USA, or anywhere else in the world, it’s a universal offer: repent and trust in Jesus Christ because He is the only answer and the only way. Abundant life doesn’t come from  an idol or from winning an Oscar, it comes from believing in the One who gave His life for us and was raised from the dead.

Contending for the True, Biblical Faith: Jude Sermon
The Day of the Lord, His Judgments and Promises; 2 Peter 3