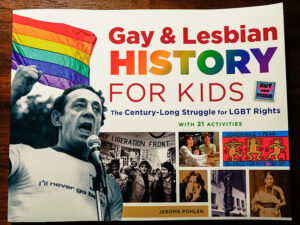 Public schools in three states so far have decided to teach elementary school children LGBT history in multiple subjects. It began in California last year, the trend-setting state, and others are jumping on board with the latest being New Jersey and Illinois.

According to reports, school districts in Rockland, CA, require students in kindergarten through fifth grades to learn about the contributions of LGBT individuals in history and social studies curriculum, and many parents are upset there is no opt-out for their children.

This is just the beginning, and this is what happens when radicals are in control of the education machine in America.

How can such a small percentage of people influence the entire curriculum of a school district, a state, and eventually a country? California parents protested, urging the school board not to push this curriculum through, but they did it anyway.

But check out the response. When the board approved the new curriculum that includes LGBT history, parents of more than 700 students kept their children home in protest. Concerned parents in other states should take their cue from these parents.

At the time, a spokeswoman for Informed Parents of Rocklin, Rachel Crutchfield stated:

“We believe that anyone who has made a significant contribution to society should, of course, be included in our history textbooks; however, the concept of sexual orientation is far too complex of a topic for elementary-aged children to be introduced to at school. … Let’s let kids be kids.”

But that’s part of the agenda, isn’t it? Reach and indoctrinate kids at the youngest ages possible to condition them against God, mom and dad. Amy Bentley, a math teacher in Rockland argued in favor of the new gay history and wants it taught at the elementary level because, “Many students enter middle school already knowing they’re different…”

What? Define ‘different.’ So, is she suggesting because these young children think they might be gay, lesbian or transgender, they must be conditioned and reaffirmed? The truth is God created them, male and female, in His image, unique, and yes, different.

But how do children know or understand they’re different unless adults teach them what to believe and what to think?

Family groups rightly say the LGBT history contradicts biblical teachings on creation and sexuality, that it will be taught in multiple subjects, and the scope of the changes will impact every subject in school.

When Illinois joined the party deciding to implement the curriculum, the Family Policy Alliance of New Jersey launched a petition to urge the governor and legislature to allow parents to opt their children out. They object, as we all should, to tax dollars being used for what is basically an assault on religious liberty as well as the promotion of a controversial worldview.

At a January 4 conference in Flemington, New Jersey, parental rights activists from grassroots group, Protect Your Children, were there to testify against the new law. But get this – the president of the NJ State Board of Education, Kathy Goldenberg, told parents the board was not empowered to make any policy changes with regard to the curriculum focused on lesbian, gay, bisexual, and transgender issues!

“The law was enacted by the state Legislature, and it did not grant the board a policy-making role with this law,”

So progressive politicians are making decisions which cannot be challenged? Hopefully, you’ve been praying for America’s children, especially for the majority of families who disagree with our children being taught not only LGBT history, but the radical sex education and perversion that’s been in schools for decades.

Prayer is good. But now it’s time to take action. You CAN opt-out by homeschooling, of course. The issue of parental rights will continue to be one of the many education battles across the country.

But what about Bible history? The Scriptures have been proven by archaeology, science, and secular historians to be accurate, reliable, and true. There is so much evidence for the resurrection of Jesus Christ, for example, but you won’t find teachers opening up the Bible and teaching about Christianity in government-run public schools.

Once again it seems Christians are the ones left out. In fact, one of the new school LGBT history lessons is “about the memoir of a boy forced into conversion therapy.” That’s code by the way, for ‘Christians are bullies, intolerant, they should leave people alone, and God has no power to change anybody.’

One more thing. The New Jersey LGBT group behind the enforcement of the policy actually has someone in a position called, “safe schools and community education manager.” Safe schools? They’re teaching young children things they should not have to hear about and process, and more importantly, it’s against the family values and the will of most parents. So what do they mean by “safe”?

It’s time for Christians and all concerned parents to speak up, get involved, and try to slow down this madness and indoctrination.

What is Your Firstborn Worth?
Mayor Pete: Pro-Life Democrats Unwelcome