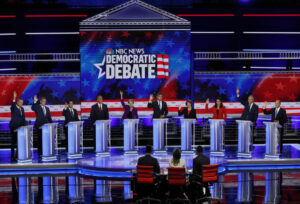 Democrats in America have a dilemma going into the 2020 presidential election. That is, if protecting human life in the womb is important. The top twelve Democrat candidates seeking the nomination appear to be in a competition to see who can be more extreme on abortion – and who can make the most persuasive argument for our culture of death.

In recent debates, not one candidate acknowledged the scientific truth that a baby in the womb is a human being who deserves the basic right to life. Some want to abolish state’s rights and remove any restrictions on abortion whatsoever. They’re out of touch with a majority of Americans, but most Democrat hopefuls think voters side with them on this issue.

‘Leave that living, crying baby to die on a table’, they say. This from so-called ‘compassionate’ Democrats. This is a fact. Every candidate who had the opportunity in Congress to support lifesaving medical care for babies who survive abortions has refused to do so. Let that sink in.

They have repeatedly voted to support late-term abortions, abortion on demand or however you prefer it described. It’s evil. And understand that they all want American taxpayers to fund abortion – whether you believe it’s wrong or not.

But then he takes a leap – and people bought it – when he said this:

“The public is already there. Things have changed. … Reproductive rights are a constitutional right. And, in fact, every woman should have that right.”

We’re not talking about allowing women to reproduce, families to procreate, to have as many children as they want. The new definition of “reproductive rights” is the right to eliminate life, to prevent parenthood, or at least put it off until having a baby is convenient by removing the baby from the equation.

Elizabeth Warren parroted the same deception saying they now have support from across the country, claiming:

Yes, the country is divided in terms of being pro-choice and pro-life. But the truth is many Americans are confused or ignorant of what the abortion procedure actually does as well as about who or what is living and developing inside a pregnant woman. Some surveys might suggest sixty percent of the public generally supports Roe v. Wade. But wait! They also strongly back some major restrictions on abortion.

According to Gallup, only twenty-five percent of adults say abortion should always be legal, and most Americans oppose legalized abortion in the second and third trimesters. Did you get that? You won’t hear this during a debate of Democrats.

Polls by Rasmussen and others reveal that support for Roe v. Wade drops dramatically when people are informed that babies’ hearts start beating as early as six weeks in the womb!

Next is Corey Booker. Several months ago, he laid out a comprehensive pro-abortion plan and promised to hold a litmus test for judicial nominees, supports codifying a “right” to abortion in federal legislation, and repealing the Hyde Amendment (restricting taxpayer funding of abortion). But the most bizarre part of his plan was the creation of an “Office of Reproductive Freedom.”

I’m not making this up. Booker stated:

“On day one, I will create a White House Office of Reproductive Freedom, charged with coordinating and affirmatively advancing abortion rights and access to reproductive health care across my Administration ,”

This from professing Christian, Corey Booker, who actually thinks people who have a biblical worldview are unfit to serve our country. Remember the confirmation hearing for Secretary of State when Booker grilled Mike Pompeo? It wasn’t about foreign policy or the most pressing national concerns; it was on Pompeo’s beliefs about homosexuality.

Then there’s Kamala Harris who, as a State Attorney General launched an investigation into the citizen journalists who exposed Planned Parenthood harvesting aborted baby body parts. Harris has received over $80,000 in contributions from the abortion giant.

Think about this: if Planned Parenthood was harvesting the body parts of puppies, the public would be outraged! They would have been shut down years ago.

During a recent Democrat debate, Harris responded to a health care question saying, as president, she would use the Justice Department to strike down state pro-life laws. That means she would abolish laws that were enacted by legislators – who were duly elected by the people.

Next, dreaming of being the first homosexual president, Pete Buttigieg said Americans aren’t free without the right to abortion. He lines up with the pro-abortion Left and refuses to name a single abortion restriction he would support.

Mayor Pete is on the record stating:

“I must say that I don’t think that you are free in this country if your reproductive health can be criminalized by government,”

More states are now passing laws to protect the most vulnerable since research shows preborn children in the womb can feel pain prior to twenty weeks after conception. Rep. Tulsi Gabbard and many others have repeatedly voted against the Pain-Capable Unborn Child Protection Act, a moderate limit on abortion after five months.

If these candidates weren’t radical enough on the issue of abortion, former Obama administration official, Julian Castro not only reiterated his support for legislation to codify a “right” to abortion in federal law; he took it up a notch. Ready?

Castro would also force taxpayers to fund abortions for transgender individuals; that’s right, you and I would help pay for women claiming to be pregnant men who want abortions.

Will this madness of moral relativism ever stop? Not without God changing people’s hearts, and not without concerned citizens, truth proclaimers, and voters making our voices heard.

A preborn baby is not a body part of a pregnant woman: Saying, “My body, my choice” is like saying, “My house, my rules.” It still doesn’t give you the right to kill anyone inside the house.

A baby is not just a “choice.” It’s a human life. Let’s pray that Americans will stop ignoring their God-given conscience and stop denying the facts.