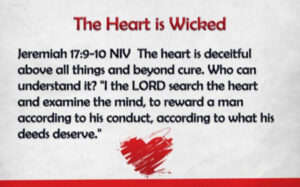 Two more mass shootings over the weekend in Ohio and Texas sparked another frenzy as liberals in the media renew their campaign for gun control. Others demand solutions to the mental health crisis, still others say shootings occur because of the alienation of young men today or fatherless homes. Progressive politicians – including former president, Barack Obama as well as many 2020 Democrat hopefuls blame President Trump. CNN and MSNBC concur, and falsely accuse Trump of promoting white supremacy.

There may be reasonable solutions to be considered and I don’t mean to oversimplify a very complicated issue, but few seem to suggest let alone address man’s greatest problem: sin. The heart of the matter is a matter of the heart.

In a culture where discipline and respect for authority is lacking, where people have bowed to the god of self-fulfillment, where narcissists abound, and where young people are coddled and not given healthy boundaries, it’s no wonder darkness and violence are increasing.

But there is a natural and spiritual law that affects every human being, like it or not: you will reap what you sow.

In the Old Testament of the Bible, the Prophet Jeremiah said,

“The heart is more deceitful than all else and is desperately sick; Who can understand it? “I, the Lord, search the heart, I test the mind, Even to give to each man according to his ways, according to the results of his deeds. (Jeremiah 17:9-10)

One glaring problem in our society is the rejection of any fixed moral anchors with which to guide and govern people. Chaos and godlessness are the result. Another clear consequence of removing the one true God from public places is that the culture of death spreads like a disease.

For example, abortion is the number one killer in the world today. More lives are eliminated under the guise of “choice” than from cancer, heart disease, accidents, and of course, gun violence.

Planned Parenthood alone commits over 900 abortions every single day (that’s one death every 95 seconds) and as a whole, all abortion clinics, businesses, and providers in the U.S. commit about 3,600 abortions a day.

This year marks the 50th anniversary of the Woodstock movement, a rebellion aimed at eradicating God and moral authority using music as an escape from reality. Those same ideas and philosophies are popular today: spirituality without religion, sex without consequences, relativism without moral absolutes, and salvation without repentance.

The ongoing, residual affect is hopelessness. The Apostle Paul warned:

“But realize this, that in the last days difficult times will come. For men will be lovers of self, lovers of money, boastful, arrogant, …disobedient to parents, ungrateful, unholy, unloving, …without self-control, …haters of good; conceited, lovers of pleasure rather than lovers of God;” (2 Timothy 3:1-4)

Sounds like American culture and the world today, doesn’t it? The truth is human beings were born with a sin nature and we all fall short of God’s standard.

Monday, Tucker Carlson of Fox News quoted author and cultural observer, James Howard Kuntsler on the recent mass shootings and violence he believes results in part from isolation and the modern void of lacking social interaction:

“[T]his is exactly what you get in a culture where anything goes and nothing matters. Extract all the meaning and purpose from being here on earth, and erase as many boundaries as you can from custom and behavior, and watch what happens, especially among young men trained on video slaughter games.”

Last year in the first weekend of August, 66 people were shot, 12 fatally, in Chicago. Shootings across the city this past weekend have left seven people dead and another 52 people wounded. This is the unreported new normal for Chicago and many inner cities in America.

When we forget the value of life and what’s important, apathy and hopelessness result.

Depression and suicide rates among teenagers continue to climb, and it seems answers are difficult to come by. According to the Pentagon, military suicides reached an all-time high in 2018.

And now, a majority of Americans support physician-assisted suicide. You can lawfully murder an elderly person in five states so far. It’s time to expand our discussions about mass shootings and guns to include abortion, suicide, euthanasia, and we need to go deeper than mental health.

Author and apologist, Ravi Zacharias elaborated on the problem in his article, “Bloodshed“:

“The power of the individual to kill with words or weapons is used to expose the hate that we nurture in our godless times. We took the Bible out of schools. We took prayer out of schools. We punish people who mention God in public graduations. We mock the name of Christ with profane delight. We have lost all definitions for everything and sound pathetic while trying to give answers for the cruelty of our time. It is easier today to preach the gospel in once hostile countries than it is in America, which has now celebrated the absence of God.”

Evil is something God neither intended nor created. But we’re not robots. If we are truly free, then we have the free will to choose moral evil rather than good. This is why we need laws and morality. There also needs to be punishment and consequences for breaking laws.

The things we see increasing in America should be a warning for Christians who have found lasting peace and salvation through faith in Jesus Christ. We shouldn’t deny or ignore what’s happening. The Bible says, “because lawlessness is increased, most people’s love will grow cold.” (Matthew 24:12)

Godlessness and lawlessness will increase, but we must not allow our hearts to be troubled, be overwhelmed by death and destruction, or become indifferent to the suffering of others. Control what is within your control. We can’t allow our hearts to grow cold because without love, it is impossible to show compassion to those who are suffering and to obey God’s command to love our neighbor.

As for those who commit lawless deeds such as murder, there will be a day of reckoning.

Solutions aren’t easy, but in the book of Ecclesiastes, one of the wisest men to have lived on earth put it this way:

“The conclusion, when all has been heard, is: fear God and keep His commandments, because this applies to every person. For God will bring every act to judgment, everything which is hidden, whether it is good or evil.” (Ecclesiastes 12:13-14)