Those who hope in the Lord will renew their strength. They will soar on wings like eagles; they will run and not grow weary, they will walk and not be faint. Is. 40:31

Two famous people took their own lives last week, and the same week, 850 others committed suicide in the U.S. alone. Every human being is equally valuable and created by God for a purpose, so how many more deaths will it take for us to admit we have an epidemic of hopelessness? Maybe it’s time we address it in a different way.

In less than twenty years, suicide rates in America have increased more than thirty percent in half the country; it’s on the rise in almost every state. Nearly 45,000 Americans died by suicide in 2016, and unlike the rich and famous, you will never know their names.

TV personality Anthony Bourdain and designer Kate Spade took their own lives, and both were famous and wealthy.

Why are we surprised when things of this world fail to satisfy?

Suicide is the 10th leading cause of death in the U.S. – and according to the Centers for Disease Control and Prevention, it’s one of only three causes of death (Alzheimer’s, drug overdoses) that are increasing. Worldwide, someone dies by suicide every forty seconds! This is beyond tragic.

A recent CDC study suggests more than half of those who commit suicide did not have a mental health condition. Over half. Some had problems involving relationships, finances, health, stress or substance abuse while others didn’t have any of these. But the end result was the same. Suicides, in fact, are the second leading cause of death for people ages 15-34.

Books and articles have been written, studies done, articles published. I don’t mean to over simplify a very serious and complicated issue here, but as important as it is to diagnose and treat (counseling, meds, etc.) mental illness, it’s even more important to acknowledge the often ignored spiritual aspect.

There’s a reason we can be in a room full of people and still feel lonely. We’re just passing through this life, and as believers, our true citizenship is in Heaven (Philippians 3:20).

“If we find ourselves with a desire that nothing in this world can satisfy, the most probable explanation is that we were made for another world.”

You’ve heard the saying, ‘there’s a God-shaped hole in all of us’ which means we have a void only our Creator can fill. The Bible says God has set eternity in our hearts (Ecclesiastes 3:11), and we were made to be in a relationship with our Maker, to love others and be loved by Him.

Author and blogger, Matt Walsh wrote a though-provoking article saying discussions about suicide need to go much deeper than mental health. He did not say ignore them; he added:

“I think we live in an empty culture. We have fled from God, from meaning, from purpose, and the suicide epidemic is a direct result. People are wallowing in despair, believing there is no transcendent truth or beauty to be found in life.” 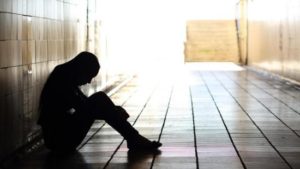 In a culture that has embraced narcissism and moral relativism in which there are no fixed absolutes, we end up seeking our own happiness and meaning. Most of us end up living by a morality of shallow self-fulfillment and temporary pleasure.

Some insist the suicide rate is climbing due to a mental health crisis, but how do they explain only a fraction of people committed suicide decades ago when family and society was more stable, and mental health was not a known issue?

Whether it is depression, hopelessness, loneliness, or one of the many other reasons people attempt suicide, they all have to do with suffering. And one of man’s solutions to physical pain and suffering is euthanasia, also known as “mercy killing” or even “death with dignity.”

Even the American Medical Association (AMA) has described physician-assisted suicide as a serious risk to society and “fundamentally incompatible with a physician’s role as healer.”

Four states have physician-assisted suicide. Oregon has permitted it since 1997. Even more tragic, 68 percent of Americans now support the idea – including 4 in 10 professing evangelicals – saying it it’s okay for doctors to help terminally ill patients end their lives. Opposition to assisted suicide is dying which indicates our civilized society doesn’t trust God and is unwilling to stand for life.

So today, when a person commits suicide themselves, some ignorantly use words such as courageous or inspirational. Is this really the message we want to send those who may be considering ending their lives? Too many have been duped into thinking this life is all there is and their only future is a grave. They accept death when they could choose life!

People turn to anything but God when they feel despair and emptiness, failing to realize we all live forever. Following God’s judgment of mankind, our spirits live on in either one of two destinations, the slums and torments of Hell being one option I would not recommend.

From the unborn, the disabled, and the elderly to the addict, the jobless, homeless, or hopeless, every human being is worthy of dignity and respect. It’s time we address the problem God’s way.

We are half-hearted creatures, fooling about with drink and sex and ambition when infinite joy is offered us, like an ignorant child who wants to go on making mud pies in a slum because he cannot imagine what is meant by the offer of a holiday at the sea.

We don’t deserve mercy so it’s hard to believe the Gospel is true. But it is! Jesus died for our sins, and if we repent and believe, we can have everlasting life. The offer is for everyone, and we each must decide whether to accept or reject it. A permanent, eternal holiday with the Lord sounds pretty good to me.

Do not let your heart be troubled; believe in God, believe also in Me. In My Father’s house are many dwelling places; if it were not so, I would have told you; for I go to prepare a place for you. If I go and prepare a place for you, I will come again and receive you to Myself, that where I am, there you may be also. And you know the way where I am going.” Thomas said to Him, “Lord, we do not know where You are going, how do we know the way?” Jesus said to him, “I am the way, and the truth, and the life; no one comes to the Father but through Me.  John 14:1-6

“For indeed while we are in this tent, we groan, being burdened, because we do not want to be unclothed but to be clothed, so that what is mortal will be swallowed up by life. Now He who prepared us for this very purpose is God, who gave to us the Spirit as a pledge; For we must all appear before the judgment seat of Christ, so that each one may be recompensed for his deeds in the body, according to what he has done, whether good or bad; and He died for all, so that they who live might no longer live for themselves, but for Him who died and rose again on their behalf. Therefore if anyone is in Christ, he is a new creature; the old things passed away; behold, new things have come; we are ambassadors for Christ, as though God were making an appeal through us; we beg you on behalf of Christ, be reconciled to God.” 2 Corinthians‬ ‭5:4-5, 10, 15, 17, 20‬ ‭

The Lord is close to the brokenhearted and saves those who are crushed in spirit. The righteous person may have many troubles, but the Lord delivers him from them all; Psalm 34:18-19

Come to me, all you who are weary and burdened, and I will give you rest. Take my yoke upon you and learn from me, for I am gentle and humble in heart, and you will find rest for your souls. For my yoke is easy and my burden is light. Matthew 11:28-30

So do not fear, for I am with you; do not be dismayed, for I am your God. I will strengthen you and help you;I will uphold you with my righteous right hand. Isaiah 41:10

He will wipe away every tear from their eyes; and there will no longer be any death; there will no longer be any mourning, or crying, or pain; the first things have passed away. And He who sits on the throne said, “Behold, I am making all things new.” And He said, “Write, for these words are faithful and true.” Then He said to me, “It is done. I am the Alpha and the Omega, the beginning and the end…  Revelation 21:4-6