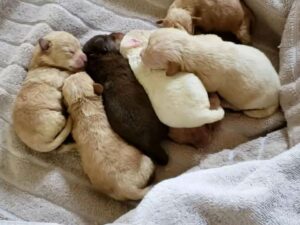 A woman in California dropped a bag full of newborn puppies into a dumpster in Riverside County a few months back and the verdict is in: a year in jail for animal cruelty and abandonment. The pups were days old and their eyes weren’t even open.

Infuriated that someone would leave puppies to die, people reacted with righteous indignation. If only we had such compassion for human babies in mother’s wombs.

Did you know if a baby is born alive and survives a botched abortion, most state laws say they must be left to die? It is against the law to provide care for those babies. In Planned Parenthoods across the nation, baby parts are either sold for research or they end up in the trash.

At least the puppies were found, given immediate care, and were saved. No such luck if your mother is human and planned to have an abortion because babies are not protected.

Over in Iceland, they abort all babies with Down Syndrome. But they did just hold a funeral for – ready – a melting glacier! Save the ice! A geologist said:

“…We made the decision that this was no longer a living glacier, it was only dead ice, it was not moving.”

In Canada last year, a report came out showing that more than 800 babies were born alive after failed abortions – and were left to die. It was the will of the mother, after all.

Another new report shows in three U.S. states alone, forty babies were born alive after botched abortions. These are the documented cases, from only three states, which means the numbers could be well in the hundreds if all states kept records. Currently, nearly twenty states still have no laws protecting abortion survivors.

Animal abuse and neglect should be punished. But we look down our collective noses at the woman who dumped the puppies while ignoring the elephant in the room: our human death culture fed by selfishness, sexual promiscuity, and a complete lack of self-restraint or self-respect.

Riverside California Animal Services said what the woman did was “a shameful act” and added, “There is no excuse for dumping puppies.” Agreed.

If you truly value all life, don’t you wish we could say this about people? In this allegedly civilized society, we’ve heard many excuses for abortion, BUT, if a fetus is in fact a living human being, are any of those excuses acceptable?

“My body my choice, reproductive freedom, right to privacy, confidentiality…” The right to end a life?

Isn’t it interesting the animal kingdom will fight to protect a pregnant mother. At least animals know better than to kill their own offspring, but, where moral relativism reigns, evil is called good and good, evil (Isaiah 5:20).

Celebrating infanticide, New York Governor, Andrew Cuomo even lit up the top of One World Trade Center and several bridges in pink lights on the anniversary of Roe V Wade earlier this year after passing a law eliminating any abortion restrictions whatsoever.

The bill actually states that it’s a basic right to kill a child in the womb. Check out this wording:

“[E]very individual who becomes pregnant has the fundamental right to choose to carry the pregnancy to term, to give birth to a child, or to have an abortion.”

Legislation in both New York and Virginia expanded abortion access well into viability—all the way through the end of the third trimester and up to the day of birth.

This is an evil, demonic worldview being driven by those with a lust for power in Washington, Hollywood, and the media. In fact, Democrats running for the 2020 presidential nomination have already backed federal legislation that would override state restrictions on third-trimester abortion.

Money was also the motivation behind America’s biggest convicted serial killer, Kermit Gosnell, who killed thousands of babies in his long career, but ended hundreds of pregnancies by severing a baby’s spinal chord. This became standard procedure at the filthy Philadelphia clinic.

But one figure I think is staggering, according to the Abortion Survivors Network, is there are tens of thousands of people living in the U.S. today who survived abortions. That’s why legislation has been introduced called the “Born Alive Abortion Survivor’s Protection Act.”

One such pro-life hero, abortion survivor, Gianna Jessen testified before congress about the reason she is alive today when her mother underwent a saline abortion:

Doctors take an oath promising to do no harm, but of course, they’re only human – just like the babies they are aborting.

Since we live in a society that generally believes we should protect animals, should we not also value and defend every single human life created in the image of the only living God? Let’s have these conversations to confront this disconnect and hypocrisy. And in order to do this, more of us need to get off the bench.