This is how the enemy advances – book excerpt from Redefining Truth (2017).

Be of sober spirit, be on the alert. Your adversary, the devil, prowls around like a roaring lion, seeking someone to devour. Resist him; 1 Peter 5:8

Growing up in the 1970s, my dad used to turn on the AM radio every morning in the kitchen as we all sat down to eat breakfast, and one of the programs we listened to was Paul Harvey. (1918 – 2009) Elected to the National Association of Broadcasters National Radio Hall of Fame, Harvey had also been named Commentator of the Year and American of the Year.

Paul Harvey often pointed to biblical values, morality, and seemed to discern and foretell specific threats to America’s Christian heritage. He seemed to understand the spiritual dynamic in play as the satanic assault on God and family would gradually infect every aspect of our culture. More prophetic than we like to admit, the following text is from his 1965 radio broadcast:

So I’d set about however necessary to take over the United States. I’d subvert the churches first—I’d begin with a campaign of whispers. With the wisdom of a serpent, I would whisper to you as I whispered to Eve: “Do as you please.”  To the young, I would whisper, “The Bible is a myth.” I would convince them that man created God instead of the other way around. I would confide that what is bad is good, and what is good is “square”. And the old, I would teach to pray after me, ‘Our Father, which art in Washington…’

And then I’d get organized.  I’d educate authors on how to make lurid literature exciting, so that anything else would appear dull and uninteresting. I’d threaten TV with dirtier movies and vice versa. I’d infiltrate unions and urge more loafing and less work, because idle hands usually work for me. I’d pedal narcotics to whom I could. I’d sell alcohol to ladies and gentlemen of distinction. I’d tranquilize the rest with pills.

Within a decade I’d have prisons overflowing, I’d have judges promoting pornography—soon I could evict God from the courthouse, and then the schoolhouse, and then from the houses of Congress.  And in His own churches I would substitute psychology for religion, and deify science. I would lure priests and pastors into misusing boys and girls, and church money. 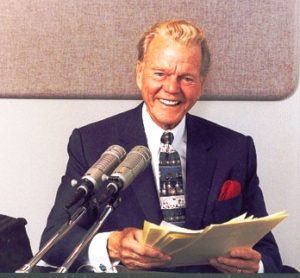 If I were the devil I’d take from those who have, and give to those who wanted until I had killed the incentive of the ambitious. What do you bet I could get whole states to promote gambling as the way to get rich? I would question against extremes and hard work, and Patriotism, and moral conduct.  I would convince the young that marriage is old-fashioned, that swinging is more fun, that what you see on the TV is the way to be.  And thus I could undress you in public, and I could lure you into bed with diseases for which there is no cure.

In other words, if I were to devil, I’d keep on doing what he’s doing.

Though this 1965 commentary was ahead of its time, it is a vivid description of how the father of lies works to deceive people. He plots and plans, seeking to steal, kill, and destroy (John 10:10), and he will use and abuse anyone gullible or wicked enough to do his dirty work.

If we don’t know and study the word of God, how can we understand His plans and discern the schemes of the enemy? How do we guard against conforming to the world or being deceived by false teachers?

Millions of Americans have apparently disregarded the faith they once held dear and have fallen away from the Judeo-Christian values that previously permeated this nation. Many in the Church have been duped by the cult of liberalism and politically correct movements that basically say practically anything is permissible except biblical Christianity. We have stopped standing against evil and speaking up in defense of the Gospel for fear of offending someone. And when Christians are silent, truth is lacking, light is squelched and darkness wins.

So what can you and I do? Arm ourselves with God’s Word, speak the truth in love, and prepare for daily battles.

Finally, be strong in the Lord and in the strength of His might. Put on the whole armor of God, that you will be able to stand against the schemes of the devil; Stand therefore, having fastened on the belt of truth, and having put on the breastplate of righteousness… Ephesians 6:10-11, 14

It’s interesting to note that truth is part of the believer’s armor. Truth is both our best defense and most effective offense. Truth not only defends us, but since Jesus is the Word, (remember, the Word is alive and active and sharper than any double-edged sword, Heb. 4:12), and since the sword of the Spirit is the Word of God, truth gives us an overwhelming advantage over the enemy.

The enemy advances when Christians become comfortable. It is difficult to deny the moral and spiritual decline in America. If there’s any hope of slowing the decaying culture, truth must be told.

Basically, the left is promoting sin as normal, natural, and healthy – and too many Christians have acquiesced. This leads to more people calling evil good – even in the church. The rise of apostasy is a sign of the times as more churches and leaders preach accommodation rather than conviction of sin, and the benefits of grace rather then obedience, responsibility, and repentance.

Godlessness is increasing through our country, culture, and even many of our churches because we have surrendered much ground and have not made preaching the truth top priority.

It’s up to us how we live this life – and prepare for the next. Keep fighting the good fight! Christian author and apologist, Don Stewart encourages us to stay strong and keep an eternal perspective:

While believers are living in this world-system, and battling the attacks of the Devil, it is possible to achieve temporary victories over this foe. These victories can only come through faith in Christ. Though victory is always possible, occasional defeat will occur, if the believer fails to do their part. Though these defeats do not affect the final outcome, they can hinder a person’s Christian testimony, as well as their spiritual growth.

Excerpt from “How the Enemy Advances,” chapter 2 from Redefining Truth by David Fiorazo

Sign of the Times? Pastor Forced Out for Speaking Truth
Exploiting Children: Part of the Left’s Agenda