Last weekend, organizers in New York hosted an event for actual witches to put a hex on Supreme Court Justice, Brett Kavanaugh; the latest in the Halloween movie series made a killing at theaters, and Americans will spend $9 billion this year celebrating Halloween. Common denominator? The occult.

What’s with our fascination with death, the supernatural, witches, zombies, and the occult? What about Halloween? Should we take the history and meaning of the tradition seriously or is it harmless and innocent? And why should we care about the practice of hexes and casting spells?

To some, it’s a game while others are seriously trying to harm people, and today’s witches are getting organized. Their Facebook group is 13,000-strong, and since the 2016 presidential election, witches have apparently been casting spells in attempts to “Bind Trump.” Christianity and Judaism regard the practicing of witchcraft, astrology, and the occult as very real – and very demonic.

The Left has unraveled as some in the #MeToo movement have now joined the radical feminist wing of political activists as we approach Mid-term elections. Since they didn’t get their way in the Kavanaugh ‘Witch Trial’ (Supreme Court nomination hearings) a few weeks ago, a ritual was held to hex the new Supreme Court Justice.

The spell was livestreamed on Facebook and Instagram on Saturday, and organizers at the Catland occult shop in Brooklyn said the hex was an act of resistance.

Their plan was to place:

“a public hex on Brett Kavanaugh, upon all rapists, and the patriarchy at large which emboldens, rewards and protects them,”

A hex on the patriarchy at large? This rebellion against God as Father and Creator denies the natural, divine order of things. The spirituality behind today’s feminism includes the quest for power over men, the goal to overthrow male leadership in society, and a belief that every woman possesses an internal god.

New Age proponents teach that Wicca, paganism, and witchcraft are all centered on a religion involving the mystery and sexuality of the female. To accomplish dominance in society, they must invoke certain spirits to help destroy the Judeo-Christian religions which are led by rabbis, pastors, and priests. 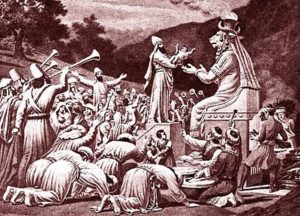 Not surprisingly, the black magic occult ritual aimed at Justice Kavanaugh was also a fundraiser. Organizers said money raised is going to charity, to an LGBTQ youth center, and to Planned Parenthood, America’s richest abortion provider, receiving $545 million in taxpayer funding each year.

There’s even a pagan political organization called WitchTheVote that focuses on feminist causes like child sacrifice – uh, I mean, abortion. Molech would be pleased.

Jesus came to offer us life in Him; Satan came to bring death and destruction. Don’t think the spirit behind the abortion industry is evil? Just look up Margaret Sanger and eugenics, or watch our expose on #Gosnell from last week.

These emboldened witches have built communities online by attracting followers by presenting a glorified, softer female face to the Wiccan movement. They now openly practice the Craft, and there are young people following their example and looking up details on how to gain power and cast spells.

According to Pew Research, the number of Wiccans and pagans in the U.S. has grown to over 1.5 million. From an estimated 8,000 Wiccans in the early 1990s, the number of practitioners then jumped to 340,000 in 2008. It’s hard to ignore the massive influence Harry Potter books and movies had during that time. Today the numbers of [admitted] occult practitioners is five times higher.

In a Newsweek article five years ago called, “Hexing and Texting,” one college professor admits we’re in the middle of an occult revival, and kids are not just wearing black lipstick, nail polish, and dark clothes while merely watching witches hex each other on movie and TV screens; they’re practicing it themselves. Some young women turn to tarot cards and astrology when things get difficult in life. If only they would turn to the Maker of the stars and read the truths in the living Word instead!

Just on Amazon, kids can find nearly 2,000 books on witchcraft, and hundreds of websites are dedicated to selling it specifically to children. Millions of public school kids have heard readings from Harry Potter books, watched the movies during class, and have even discussed details of casting spells. Some schools have Harry Potter curriculum options.

With the help of Hollywood, occult proponents have effectively repackaged witchcraft by promoting not only spiritual power, but ‘free thought’ and ‘understanding of earth and nature.'” Demonic ideas are now presented as glamorous and exciting – kind of like the thrill we seek with certain Halloween celebrations. The bottom line is witchcraft has become one of the fastest-growing religions in the U.S. 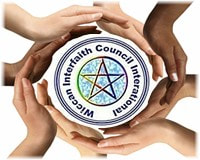 You might be thinking, ‘now wait just a minute. Wicca and witchcraft is a religion?’

The Church of the Wicca (Wiccan Interfaith Council International) describes itself as a “nonprofit religious, educational, and charitable organization” holding a 501(c)(3) status with the federal government as a “church or conventions or association of churches.” Yup, they’re tax exempt.

Public schools openly discriminate by allowing anything except biblical Christianity. Given current trends toward godlessness in an increasingly postmodern society, the rejection of Christianity continues to leave a void that must be filled with something. The promotion of the LGBTQ movement as normal and natural has influenced millions of American children; interest in the occult has also filled the gap. 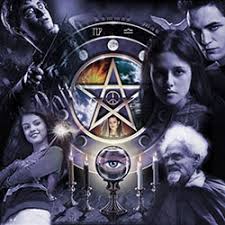 For decades now, schools have not allowed truth about Jesus Christ, the only living God, and Christianity to be taught or promoted, even though they openly accept many ideas from and references to:

Atheism, Humanism, evolution, environmental extremism (earth worship), Buddhism, Islam, and of course the religion of Wicca – the practice of witchcraft.

With young and old alike falling for false gods, idols, and religions, it’s no wonder the Christian faith has taken a hit. To add to disturbing findings which should alarm Christian parents, according to Pew, the percentage of people ages 18–29 who “never doubt the existence of God” has fallen to just 67 percent. Ten years ago, it was 81 percent. (Remember, kids today begin doubting God during middle school years!)

I don’t mean to oversimplify part of the explanation, but over the past few decades, it is hard to ignore the glorification of zombies, vampires, death, the occult, and the supernatural. Witchcraft has gone mainstream; casting spells is cool, black magic is exciting, fortune telling is fun, and killing zombies is sport.

But there’s more. According to Market Watch, the psychic services industry is now worth approximately $2 billion.

The modern spirits behind the ideas, practices, and products of Hollywood and the gaming industry certainly are not acknowledging Jesus as Lord and God. Witchcraft is satanic, and is a counterfeit of the power available to believers through the Holy Spirit.

There are clear warnings in Scripture about everything from astrology and fortune telling to casting spells and sorcery:

There shall not be found among you anyone who makes his son or his daughter pass through the fire, one who uses divination, one who practices witchcraft, or one who interprets omens, or a sorcerer, 11 or one who casts a spell, or a medium, or a spiritist, or one who calls up the dead. 12 For whoever does these things is detestable to the Lord; Deuteronomy 18:10-12

This brings us to Halloween. Does the history behind the holiday matter and is it detestable to God? Is it harmless or, like witchcraft, is it something we should avoid? Christians in America continue to debate the issue.

Halloween is a combination of pagan superstition and traditions associated with witchcraft and the occult. Its roots can be traced back about 2,000 years to the Celts of Europe, who occupied parts of Ireland, the UK, and northern France. It was a pagan festival called “Samhain” during which the dead were honored and sacrifices of animals and crops were made to appease the spirits.

Death is a reality for all mankind and a tragic result of sin and should not be celebrated. But we just love to be entertained and scared. For example, forty years after the original Halloween movie came out, the 2018 version just sliced up the box office with a $77 million dollar opening weekend. The National Retail Federation estimates we’ll spend a whopping $9 billion this Halloween, with $3.2 billion of that being spent on costumes.

The retail industry may love Halloween, but many police officers and insurance companies dread it. Evil acts such as vandalism, fires, destructive pranks, sacrifices, glorification of sensuality, death, and demons are in strong opposition to the Holy Spirit.

There is a living God that exists and is sovereign over all He created. He has authority over all powers in the universe, and He is a personal Being of infinite love, wisdom, and power. Scripture also teaches:

I will set my face against anyone who turns to mediums and spiritists to prostitute themselves by following them, and I will cut them off from their people. Leviticus 20:6

He sacrificed his children in the fire in the Valley of Ben Hinnom, practiced divination and witchcraft, sought omens, and consulted mediums and spiritists. He did much evil in the eyes of the LORD, arousing his anger. 2 Chron. 33:6

Entertainment can open us up to evil spirits and move us away from the truth of Jesus Christ. Satan will take every opportunity to fill us with the things of this world as he masquerades as an angel of light, which is why Christians must be discerning and guard our hearts.

According to the Bible, God is light and in Him, there is no darkness at all. Christians are instructed to not participate in these things, but to expose the darkness (Eph. 5:11). Spiritual warfare is not a game, and we need to be more discerning and guard our hearts. Witchcraft is real, and it’s a sad reflection of our culture that the godless are now emboldened and open about demonic practices.