Over the years, irresponsible reporting has destroyed trust in the news media as well as our society, and they just keep stirring the hornet’s nest of division. Education and entertainment are lost to the left, but when the institutions of journalism and justice are corrupted, prepare to say goodbye to a free republic.

The consequences of caustic, one-sided news reporting are obvious. And it’s not just the usual suspects at CNN, MSNBC, NPR, and the main networks. The politically-charged climate is being cultivated in cities across the country.

I was in Southern California last week and noticed local headlines promoting everything from illegal immigration and transgender rights to student walk-outs protesting guns and gun ownership.

In contrast, I didn’t see much about the growing plight of the homeless there which is an overlooked problem, poverty, higher taxes or failed government policies.

My wife and I visited Santa Monica pier and saw the resist movement, alive and well-organized with liberals selling buttons, souvenirs, and of course, “Resist” bumper stickers. “Impeach Trump” was a hot seller, but my favorite hypocritical slogan is, “Love trumps hate” in rainbow colors, of course. 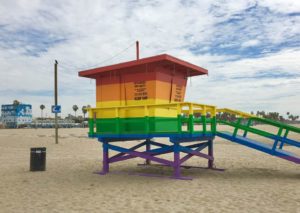 Check out this lifeguard stand on the beach with “VENICE PRIDE” on the back.

Speaking of hypocrisy, the Democrat media gave Joe Biden a pass for wanting to “beat the hell out of” Donald Trump. Don’t miss the irony: Biden talks about assaulting Trump – while speaking at a rally against sexual violence! Imagine if a Republican said the same thing! 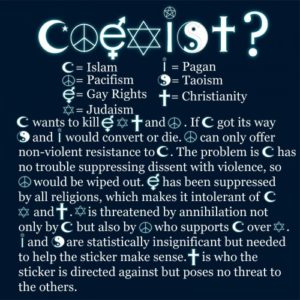 Many cars in Los Angeles had “Coexist” bumper stickers, the anti-Christian slogan created to oppose the exclusive claims of Jesus Christ as being the only Way of salvation.

The fact is we have coexisted for centuries, but their idea of peace and tolerance is: no moral boundaries, not having to answer to God, and no Christian influence in culture.

In other words, anything goes.

The media effusively supported and reported on the liberal Women’s March as well as the Planned Parenthood-backed “March for Our Lives” anti-gun protests, but they practically ignore the annual March for Life. Notice a pattern?

Since the 2016 election there has been a relentless barrage of negative headlines on the Trump administration. I’ve never seen it this bad; a media so collectively committed to bringing down a president, they’re not even hiding it anymore. Through misinformation and Saul Alinsky tactics, they blame President Trump and the Republicans for any perceived problem.

With over 90 percent of the news coverage of the Trump administration being negative, I think we’re a little out of balance. Not only do they insist on opposing conservatives and disagreeing with them; but on censoring them as well.

Unfortunately for U.S. citizens, liberal bias has become the new normal. Research shows fewer than ten percent of journalists are conservative – and that may be a generous estimate.

Not letting a good crisis go to waste, the alleged media professionals practically boycott the truth if it doesn’t fit their narrative. They censor students who support the 2nd Amendment while prostituting Florida teenagers on the ‘gun reform’ tour.

Over 85 percent of the elite media support abortion and same sex marriage; over 75 percent support socialism and transgenderism, but their new marching orders are to attack the 2nd Amendment. Democrats are openly registering voters at gun reform rallies across the country. It’s just part of the resistance. One sign I saw said: “Vote them Out!” Go ahead and vote, but when will you stop inciting hatred and division?

I could be wrong but I think the average American is becoming weary of their tedious talking points; and I’m not just referring to Russian collusion. Much damage has been done in the arena of public opinion.

If you really believe “Love trumps hate,” then try showing love, patience, and tolerance to those you disagree with. It should be a two-way street whether you believe the liberal media or not.