Abortion is the real war on women (and men). Here’s a tale of two marches featuring two completely different worldviews, and it’s obvious which side the liberal media is on. Every year since judicial activists on the U.S. Supreme Court legalized the practice of abortion, the annual March For Life has been held in Washington D.C. drawing hundreds of thousands of concerned Americans.

Last year, a very different march began. The not so family-friendly ‘Women’s March’ took place in various American cities, and among their values are the right to choose… (incomplete sentence). Choose what exactly? We’ll get to that.

Did you know there have been over 60 million abortions in the U.S. since Roe V. Wade legalized abortion in 1973? Most Christians would say abortion is a glaring indicator of a nation’s depravity. Even the animal kingdom knows to protect life in the womb.

Did you also know the Latin word for “fetus” is little one? So what exactly are they choosing? To “terminate a pregnancy,” they say. What is a pregnancy? It is when a living being with separate DNA and a beating heart is growing inside a mother’s womb. It means a woman is “with child” – just like the Bible teaches.

Let’s not candy coat it. Is abortion then, ‘the right to choose’ to eliminate a living human being? What about the pre-born person’s rights? Think about this: If a pregnant woman is attacked and murdered, and loses her baby, the attacker can be charged with double homicide. Why? Because two lives were taken.

And now a Tale of Two Marches – according to the media. Since 90% of the liberal media support abortion, last year, the networks covered the Women’s March 129 times more than the annual March for Life.

And here’s how NBC briefly reported on it this year:

“The president directly addressed a massive crowd of anti-abortion activists at the annual March for Life rally in the nation’s capital.”

Yep. We’re just a bunch of radicals that want people to be allowed to be born. 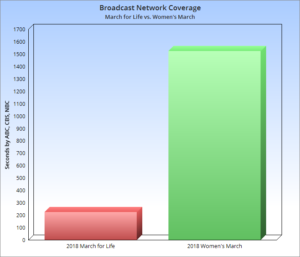 How much time did the networks give to the March for Life? 2 minutes, 6 seconds – – barely mentioning more than 100,000 marchers a few Friday’s ago. However, the same media gave the Women’s march seven times more coverage. Sadly, the media doesn’t even try hiding their bias anymore when it comes to political and social issues – which by the way, are moral issues.

Okay, so how about some good news? Let’s look at some recent surveys:

Catching up to the Bible after all these years; ultrasounds, sonograms, and other medical advances point to the fact human life begins at conception inside the womb. And in recent news, the House passed a bill that would protect babies born alive after botched abortions.

For You formed my inward parts; You wove me in my mother’s womb. 14 I will give thanks to You, for I am fearfully and wonderfully made; Your eyes have seen my unformed substance; And in Your book were all written, the days that were ordained for me, when as yet there was not one of them.

Finally, more young people today are pro-life than ever before, in part because we have technology that was not available in the 70s. God created you and me in His image. Let’s promote the value of every single human life, and make abortion unthinkable. Hollywood, government, and the media won’t defend the most vulnerable; it’s up to us. Truth, facts, and science are on our side.

*VIDEO OF THIS TRANSCRIPT posted by FreedomProject Media.

Much more (articles, resources) on this Stand Up for the Truth program with pro-life author, Stephanie Gray: The Sacred Right to Life

Forget the ‘Good Old Days’ and Press On!
Worldview Matters: What If Christianity were True?