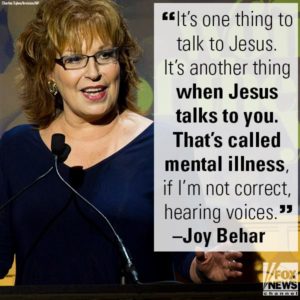 Vice President Mike Pence says God speaks to him, but some call it mental illness. Oprah says God will speak to her if He wants her to run for president, and liberals cheer. Is this glaring double standard the new normal?

It’s not just Joy Behar. Christianity is generally not tolerated in Hollywood and the entertainment industry. And they’re not shy about it.

But in a recent interview with Ann Silvio on 60 Minutes Overtime, billionaire entrepreneur, Oprah Winfrey said she hasn’t heard God’s call to run for president, “Because if God actually wanted me to run, wouldn’t God kinda tell me?”

And on The View recently, a clip was played of disgruntled White House staffer Omarosa Manigault trashing Mike Pence as an “extreme Christian” who has conversations with Jesus. The View panel then proceeded to mock the VP’s faith.

“It’s one thing to talk to Jesus. It’s another thing when Jesus talks to you. That’s called mental illness if I’m not correct. Hearing voices.”

One of the best responses I’ve heard was from Fox & Friends co-host, Ainsley Earhardt, a Christian herself:

“…she [Behar] doesn’t know Christ. She doesn’t know the joy and the love that He provides to so many people, so it just made me feel sorry for her.”

By the way, Pence didn’t say He heard voices. He said what millions of us believe regarding our relationship with Jesus Christ and how God speaks to us in various ways.

Speaking of double standards, what about Hillary Clinton who apparently still communes with the dead? Even hubby Bill reminded an audience several years back that she hears from Eleanor Roosevelt frequently. I haven’t heard a peep on that, have you? 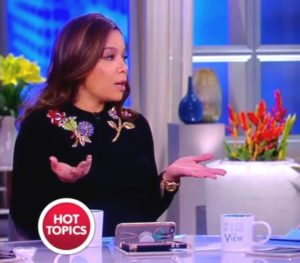 “When you have a Mike Pence who now puts this religious veneer on things and who calls people values voters, I think we’re in a dangerous situation.”

Dangerous? We’re not talking about ISIS here; not bomb threats, a viral outbreak, rape, or a shooting rampage. These women are referring to the Christian faith.

Mike Pence responded saying “it’s just simply wrong for ABC to have a television program that expresses that kind of religious intolerance.”

Aside from religion, on previous episodes, Hostin referred to Pence as incompetent, and Whoopi Goldberg once compared Mike Pence to a member of the KKK who wanted to hang her on a tree. Seriously?

At least one person confronted the twisted dialogue on The View. Meghan McCain said:

“I understand, if you’re a liberal, obviously you have certain problems with Mike Pence. …We see the world through very different veneers.”

Some people do have wrong ideas about what it means to be a Christian. Joy Behar once said Timothy McVeigh was a Christian, and Goldberg actually claimed:

Sorry ladies. Wrong on both counts. Do some research.

Remember when Masterpiece Cake Shop owner, Jack Phillips was on The View and said endorsing a same-sex wedding and baking a cake for it would contradict Jesus’ teachings. Speaking for the Lord, Behar declared,

“Oh come on. Jesus would have made the cake.”

And in June 2017, the entire lineup on The View blamed Christians for taking away free contraception. I’m not kidding. Joy Behar asked, “How is it different from the Taliban? Let’s not forget they are trying to keep women in their place, barefoot and pregnant.”

Back to Oprah for a moment. Over at CBS on Sunday, 60 Minutes devoted 11 minutes to Oprah Winfrey’s conversation with Michigan voters. She asked people about accusations against Donald Trump and, of course, his mental health.

“There have been some members of Congress, including Republicans, questioning his stability and fitness for office. What do you think of that, and do you believe he has the temperament to be president?”

Regarding her “mental illness” comments, Franklin Graham weighed in saying all believers should be alarmed by the anti-Christian rhetoric on The View. He continued,

“For Joy Behar to say that all Christians are mentally ill is like suggesting we need to lock them up. They need to be taken out of society…”

Bigotry against any group is absolutely wrong, but if Joy Behar had said that about gays, feminists, or Muslims, she’d probably be fired on the spot. Criticizing Christ followers however, now gets a pass.

This is what often happens when someone on the left doesn’t understand something, especially spiritual things: they tend to attack or criticize it.

This may explain why many don’t even try cracking open a Bible. 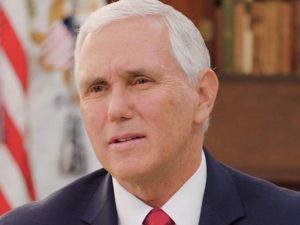 “I actually heard that ABC has a program that compared my Christianity to mental illness. And I’d like to laugh about it, but I really can’t. It’s just wrong; and it’s an insult …to the vast majority of the American people who, like me, cherish their faith. My Christianity is the most important thing in my life.”

Isn’t it nice to have someone in the White House defending Christians?

At the risk of stating the obvious, for centuries, millions of believers have claimed a personal relationship with Jesus Christ. He speaks to us in various ways including through Scripture. 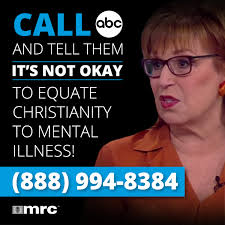 We shouldn’t expect unbelievers to have biblical morals. They need the gospel and ironically, they need to talk to Jesus and confess their sins.

The good news is Americans are not only calling out ABC over this, but thanks to Brent Bozell and the Media Research Center, over 25,000 phone calls have been made so far demanding an apology.

Unless advertisers back out of sponsoring The View, I’m not holding my breath. Jesus said,

In this world you will have trouble, but take courage, I have overcome the world. John 16:33

*A shorter version of this article originally appeared at Freedom Project Media.

Does God Care about Football – or about Who gives Him Glory?
Can the Bible and Transgenderism both be True?