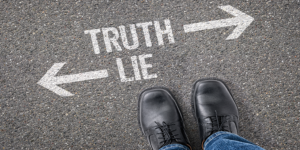 Be of sober spirit, be on the alert. Your adversary, the devil, prowls around like a roaring lion, seeking someone to devour. But resist him. (1 Peter 5:8-9)

Is it too late for Christians to be more discerning? Satan has deployed enemies of truth into our culture and sadly, we have allowed them to influence us. The agenda had been gradual and subtle decades ago, but today the deception is out in the open for all to see – or ignore.

“If you really want to know the truth, it is revealed through Scripture because God is truth. He is the final authority. As you see people’s bad behavior and sin, including open adultery and sexual perversion, being promoted in our culture, remember they need Christ. Even the loud, proud activists. They are not necessarily bad people; they’re just wrong, and the Lord gives each of us the freedom to accept the truth or pay the consequences.

If we are lovers of God and followers of Jesus Christ, we should not approve of and love things of this world more than Him (Romans 12:2, Gal. 1:10). We certainly should not be celebrating what is evil or sinful, and, as we take a stand for what is right, attacks will come.

We must understand the Enemy’s tactics and how Satan, the Father of Lies, suppresses the truth, twisting words and meanings using everyday people to advance his agenda. I’d probably do the same thing if I were him.

Millions of Americans have apparently disregarded the faith they once held dear or have fallen away from the Judeo-Christian values which previously permeated this nation. Many in the church have been duped by the cult of liberalism and political correctness that basically says anything is permissible except biblical Christianity. We have stopped standing against evil and speaking up in defense of the gospel for fear of offending someone, and when Christians are silent, light is squelched and darkness wins.

According to the Bible, Satan’s power over us is already broken, death has been defeated, and the war has been won, thanks to the victory we have in Jesus through His sacrifice, death, and resurrection. The battle and warfare, however, continue – and they will intensify – until the Lord returns.

The cunning schemes of the devil are carried out all around us in this world system over which he has free reign. How does the Enemy work and advance his agenda of lawlessness, chaos, destruction, and unrighteousness? He uses people.

From a rainbow-colored White House to Hollywood hype over the latest perversion, from media selling sexual confusion to corporations proudly promoting political correctness, it is difficult to deny the moral and spiritual decline in America. If there’s any hope of slowing the decaying culture, hypocrisy must be called out, lies must be refuted, and truth must be told.

It is virtually impossible to correct and improve the direction of a country if people, especially Christians, are not convinced there are major problems and that we are way off course. Apathy is another issue killing America, but since we cannot make people care, we need to reach those who may be in the busy, unconvinced, or uninformed categories.

But as we try raising awareness in an intolerant culture that is redefining truth, opposition is guaranteed. The Left is shrewd at using words as weapons to silence those who do not agree with them. Enemies of Christ will not relax or ease up on their agenda, and one of the greatest battles in the country today is being waged by the LGBTQ movement. Author and teacher Peter Heck stated,

“They know the success of their cause depends upon the total abolishment of the Judeo-Christian ethic and the Moral Authority it teaches. That is why any belief that the homosexual lobby is merely a passive group of individuals wanting to peacefully coexist with others who have different beliefs and values is naively absurd.”

The Enemy advances when Christians relax. Though Christianity is growing, particularly in underground churches in persecuted nations around the world, who do you think is having more influence on America today?

The marketers of evil claim they are fighting because of discrimination, oppression, injustice, and inequality. They say they fight for love, acceptance, diversity, equal rights, and freedom. We’re onto their schemes and the tedious talking points trumpeted by the liberal media, the Left, Hollywood, and many within the government education system.

But it is not just those whose new religion is sex, and it’s not just those who claim they just want to “live and let live.” It’s also those who devalue human life and promote moral relativism. Planned Parenthood and advocates of murder cry out, “freedom,” “choice,” “it’s my body, not yours, not the government’s and not God’s.”

The Left is using atheists, communists, socialists, and LGBTQ proponents to blot out God, normalize homosexuality, lie about life in the womb, undermine natural marriage, tear apart the traditional family, create as much chaos as possible, and, well, promote lies instead of truth.

Since we’re talking about methods and people Satan uses to do his work, we should also take a sober look at how our perceptions have changed regarding morality and what has become acceptable or permissible to professing Christians. We must recognize the sin in our own camp and call out hypocrisy in the church when necessary.

We must pursue Christ, invest time in the Word, have accountability and fellowship with true believers, be disciplined, and work harder to build others up while we strengthen our faith and especially our marriages. Jesus told His disciples, If you love Me, you will keep My commandments (John 14:15). Looking at just two of the Ten Commandments, we must acknowledge the epidemic of idolatry and adultery within Christian circles.

We don’t talk often enough about adultery, which is now pretty much accepted by a majority of Americans, including many who claim to be Christians.

Marriage is to be held in honor among all, and the marriage bed is to be undefiled; for fornicators and adulterers God will judge. (Hebrews 13:4)

Years before the Supreme Court gave its tyrannical opinion ruling against God-ordained natural marriage in 2015, the agenda was well underway to remove America’s moral anchors. What was most disappointing, however, was to observe the influence secularism was and is having on the American church. Today we can see the undeniable fruit of lacking a solid foundation, with increasing numbers of gay ministers and pastors in several churches and denominations.

The rise of apostasy is a sign of the times as more churches and leadership preach accommodation rather than conviction of sin leading to repentance and salvation. If we are not much different from the world, there’s a problem.

The Enemy is advancing through our country, our culture, and even many of our churches because we have surrendered much ground and have not defended the truth. Though there is always hope for a revival – and I have no idea what it might take for this to happen – the light is dimming in and on America, and the clock is ticking.

Many have already been deceived as the Enemy has had success defining the terms of battle, and in many cases, redefining words. The Left has been promoting sin as normal, natural, and healthy, and when Christians speak up, it leads to charges of intolerance. If we do nothing, even more people will call evil good.”

If most Christians continue to avoid these battles, if we are not established in His truth, and if we refuse to defend the faith, society will rapidly deteriorate. If we do not pray to the only living God to give us wisdom, strength, and guidance, we won’t be able to effectively share the gospel, influence culture for Christ and bear good fruit for Him.

The World Wonders About USA Protests
Conscience, Corruption, and the Abortion Business Cover-Up